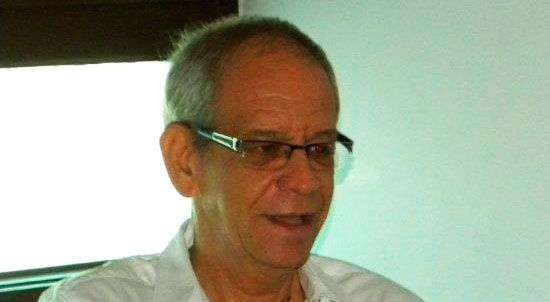 This story is about how to become a writer in the most unexpected way, its director Gerardo Chijona told OnCuba.

The human thing is the name of the latest film by Chijona. It marks his return to comedy after two dramas, Ticket to Paradise and Esther somewhere, but this time, he says he will experiment a more sophisticated humor than in previous installments of the genre.

This is a film about the criminal underworld in Havana, but not on the usual ways, but on a new subject, where literature converges with marginality.

The argument stems from a novella by Francisco Rodriguez who is currently writing the script and also co-wrote the one for Ticket … As he told us they are on the eighteenth version, and they are almost ready to conclude it, for every day they think of something new to enrich it.

Chijona tells that this film tells the story of a petty criminal finds out from a burglary of a home, which he broke in to steal electrical appliances and in a bag he finds a manuscript, that he can become a writer. Then life changes for this wanna-be criminal who discovers, through hard work and taking many trips, he has the writing bug inoculated in his blood, in spite of the saying that goes: any one can write but not everybody is a writer.

This petty thief is interpreted by the young Hector Medina, who starred Vinci, by Eduardo del Llano and has become a fetish actor for Chijona in his recent works.

The filmmaker takes on the challenge of venturing into a comedy with some inexperienced players in the genre but with undeniable skills and great acting ability. Carlos Enrique Almirante, Vladimir Cruz, Laura de la Uz, Mario Guerra and Osvaldo Doimeadiós complete the cast.

He bets again for suggesting, instead of showing the obvious. That is one of the biggest challenges of this story, in addition to addressing the thorny and complex world from a slightly satirical and ironic perspective, from a refined Cuban humor.

Initially the film was inspired by the Hollywood film Bullets over Broadway by Woody Allen. He goes for the reflective mood according to the filmmaker, will be his first film in which the referent is not reality but cinema itself.

“Although it was born of a conversation about Bullets… and has a lot to do with humor as Allen was taking over the story we move away from the original idea of this film. In the script there are many homage to all Allen films, and the Cohen brothers, films like The Godfather and The Sopranos series. In this project we are closely linked to the classic American comedy genre film, we are heavily inspired by film references. ”

The film takes its title from the last story written by the thief -turned writer and director feels that despite that history differs from Esther … it has much in contact. “In both, the social context is not much and is not involved with the conflict. As in Esther … the story of this film is very small and the plot becomes more complex due to the relationships of the characters. In my previous film which gave complexity to the story was the need of human beings to communicate with each other despite the differences, here I feel that what is important is the need to find a vocation above all, “he said.

In this new installment that begins shooting in March Chijona says he also find similarities with Ticket … ” On this movie … I also put into practice something I’m still learning: the suggestion above brainer. Writing scenes are always incomplete, never finish off a scene, or begin or end then before. We worked hard in the structure from the overture, without trying to guide the viewer , but try searching the go its own way in the film” he says.