Charly Morales Valido
in Technologies of Communication and Media
1 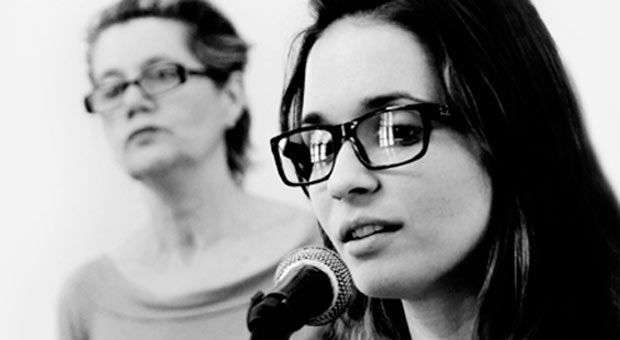 Reading e.e. cummings is a challenge because the good poet liked to experiment with shapes, punctuation and even vocabulary. That editors always put his initials in lowercase in a way you lived up to his anarchy in writing, expressed in the formal fragmentation of his verses.

Take that to something as mathematical as music enhances the merit of the British Sue Herrod, who put to e.e. cummings poems for the concert Up into the silence, which people attending the presentation of her DVD this weekend in Chaplin Cinema, arguably the best sound place throughout Cuba, enjoyed.

The projection of the audiovisual material that won two 2013CUBADISCO awards- highlighted between the parallel activities of V Leo Brouwer Festival of Chamber Music, not only because it allowed live again one of the best shows of last year, but it was the first DVD recorded in Cuba with 5.1 surround sound

It all started in 2002 when she took a Cummings poem as a musical exercise, and fell in love with the style. B y 2004 she already had 13 songs for piano and voice, and recorded with Diana Fuentes a demo with six pieces, which won a prize. Shortly after Diana became famous, and eventually decided to resume the project and do a concert as God intended. Ernan Lopez-Nussa suggested the Karl Marx Theater, and in June 2012 they made Up into the silence with great public and critical success

“Working with Diana was very pretty, she goes from experimental to pop, to classical: many people can sing, but few can jump styles like her,” the artist said, who studied for four years the unusual metrics and syntax of Cummings.

“Cummings made a poetry that speaks, inspired by the life and nature, and experiment with ways to the point that was a challenge to compose about something so intimate and fragmented,” Herrod said.

The artist, a permanent resident in Cuba since more than a decade ago, introduced the film accompanied by musicians and members of her production team, in a free show. An excellent opportunity to feel as if they had traveled back in time, listening to Diana singing Cummings with Herrod notes as if they had been that night in 2012 at the Karl Marx