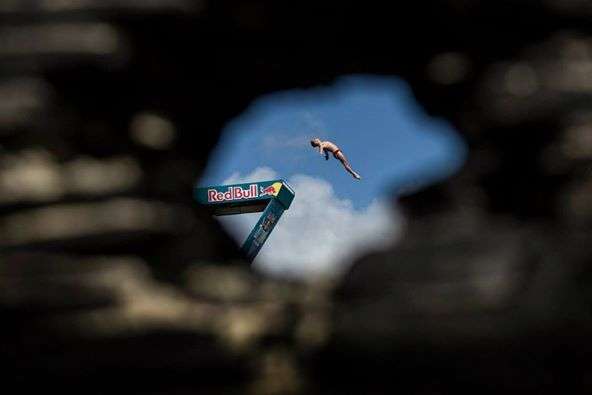 The divers that will star the first stop of the Sixth VI Cliff Diving World Series, which begins Friday with qualifying stage and will culminate on Saturday with the final, in the Castle of the Tres Reyes del Morro, are already in Cuba.

The list has ten candidates for the podium at this year’s event, plus four guests also experienced in the art of acrobatic stunts, one of the most dangerous and spectacular specialties in sport disciplines.

There is no other way to catalog those jumps from 27 meters high, where divers become true human missiles, as they reach speeds close to 90 miles per hour in matters of seconds.

To face such danger several years of training are required, with previous work in lower altitudes, especially in the traditional ten-meter platform, then they climb to the top set in the cliff diving.

Here, we present a brief look at competitors who will captivate Cuban fans during Friday and Saturday, to get into their careers and know some details of their journey through the sui generis modality. Here they are under scrutiny.

Artem Silchenko . Born in southwestern Russia on February 3, 1984, so now he is 30. For eight seasons he was in China, where he cultivated much of his jumping program through intensive training. For the vast majority of specialists is currently the best end diver on the planet, a title won after nine scepters at different stages of the World Series, in addition to the championship in 2013 and three consecutive overall podiums from 2009 to 2011. He is globally known by a complex implementation that begins with a balance back and ends with two fatal and two half turns and twists, which also includes a “blind” entry that prevents him from seeing the water from the middle of the jump.

His phrase: “One or two seconds before diving, my body is still on the platform, but my brain is already flying.”

Gary Hunt. Born in 1984 in Southampton, United Kingdom, the British was jumping in 2006 from the ten-meter platform in high-level skill events, but decided to focus his career in the cliff diving and has become a star. Of the five previous editions of the World Series he has won three (2010 to 2012), along with 15 stages, four of them in 2010, when also recorded six consecutive podiums, absolutely unbeatable. Reputed by inventing new and spectacular moves to take the lead in tournaments, and the clearest example is his jump difficulty rate of 6.3 (the highest in the circuit), which includes three and four deadly turns.

His phrase: “It was an amazing feeling to win the title again, especially when you are competing against some of the world’s best athletes in this discipline.”

Orlando Duque. Born in Cali, Colombia, “the Duke” is the most experienced diver (38 years) of those involved in the World Series, and also one of the most successful, with four consecutive podium finishes in the lid, including the championship in 2009. He began his career in traditional Olympic jumps, but in the mid-nineties definitely moved to cliff diving, or what he calls “the most natural way to jump.” Currently concerned about the rapid evolution of the sport, so he is focused on learning new jumps and increasing degrees of difficulty.

His words: “It is important for me to know that when you look at the records, my name will be there first.”

Jonathan Paredes. The “flying” Mexican still has not reached age of 25, but his youthful enthusiasm and a past full of experiences in the jumping events have placed this pearl of cliff diving among the most notable specialists in the circuit. His young age has not stopped him from having early prestige in the field of extreme jumps, especially with natural talent and accelerated promotion, materialized last year with a fourth place overall in the World Series and the bronze in the World’s at Barcelona, always lagging behind the best in the world.

His words: “I love to do shows, from the 15 years it has been my lifestyle, but everything has changed rapidly. I went from diver shows to occupy third place in a World championship, where I felt under a lot of pressure and nervous. “

David Colturi. His life has always been linked to diving, in fact, the sport began early, with only five years of age, and at 11 he was already competing for a team in Michigan. He attended Purdue University and managed to become champion of the platform in the U.S., but then became fascinated with tall jumps to do one in the amusement park in Monticello, Indiana. Currently training at the University of Michigan in Ann Arbor, where he also works in a research lab. For two consecutive years the American, who only a week ago turned 25, was fifth in the World Series, including several podiums, so this campaign he hopes to advance in the standings.

His phrase: “Competing in the World Series is the culmination of a life committed to the training and love for the sport. Qualifying for the tour is a dream come true and the start of a new chapter in my diving career. “

Michal Navratil . This Czech has lost his name and is known worldwide as Superman or Supratil after that in 2013 he jumped with a superhero cape to complete the mythic World Cup final in Barcelona, where he finished fourth. Famous for its uninhibited character, which can sometimes be eccentric, the diver, 28, reached his highest point in 2011, when he finished third in the World Series, behind Hunt and Silchenko . But then he has failed to keep pace and has finished sixth in the last two contests.

His phrase “jumping off cliffs is an opportunity to excel.”

Steven LoBue . Another American jumper from the platform, a modality in which he could represent his country at the Olympic Games in Athens 2004, but was eventually excluded from the selection . Anchored third in the World Series in 2012, but last year he preferred to devote to perfect his arsenal and increase the degree of difficulty of his performances, including a jump of five turns, which he already successfully implemented at stops in Italy and Thailand, which placed him second. Therefore, he is thought that this season he can make a breakthrough into leading positions.

His words: “The winning jump in Wales is a feeling I will never forget. I really want to get a few more of those! “

Blake Aldridge. Perhaps no other extreme diver made his first jump as late as in 2011, just as this British, 28, enrolled for the first time in cliff diving, after a journey through the traditional jumps, at which he even reached the London 2012 Olympic final in the synchronized platform. But his life has been full of problems, from a detached retina at the beginning of his career to an arrest (2010) on suspicion of shoplifting wine. In the cliff diving he has achieved three podiums in World Series, and now he is openly committed to a successful implementation of four turns, similar to that of his compatriot Gary Hunt.

His sentence: “At 27 meters high, I think I’ve finally found myself.”

Andy Jones. The risk is nothing new for this 29 year old American, especially because he has spent the last decade doing acrobatics with Cirque du Soleil in Las Vegas, but has also starred in such exotic places as Saudi Arabia. He grew up in Sandy, Utah, western United States, and since childhood was associated with extreme sports. In cliff diving, “the closest thing to flying” in his opinion, he has experienced rapid ascent, to the point that this year he has been included for the first time as one of the ten contenders for the crown.

His words: “The first time I looked through a platform of Red Bull it was like, is this really possible? But then I saw other guys that do it, and I thought, OK, I guess I’m not going to die. Then, despite my successes, I intend to challenge myself with new tricks in new places. “

Kris Kolanus. For this 27 years Czech cliff diving is his second hobby, because first order is dedicated to the promotion of musicians, especially in the wide range of electronic music. It is probably the diver of less caliber among the ten enrolled for seven stops of the World Series 2014. Debuted in this contest in the 2011 edition as a guest and during the three preceding seasons he has not reached any podium, although specialists ensure that he can rub shoulders with leaders if makes progress in his diving strategy.

His sentence: “Overcoming nerves, that was always my biggest fear.”

In addition to these ten men, four guests will jump in Havana seeking to accumulate units in the next season to increase their chance to get into the list of contenders for the World Series crown. They are Mexico’s Jorge Ferzuli, Colombian Miguel García and Brazilian Edivaldo Keda Moura and Jucelino Junior.

Which of these characters grabs your attention the most? True, it is not easy to choose one in specific, but surely, after seeing them jump in Havana during the upcoming weekend, we can opt for one.