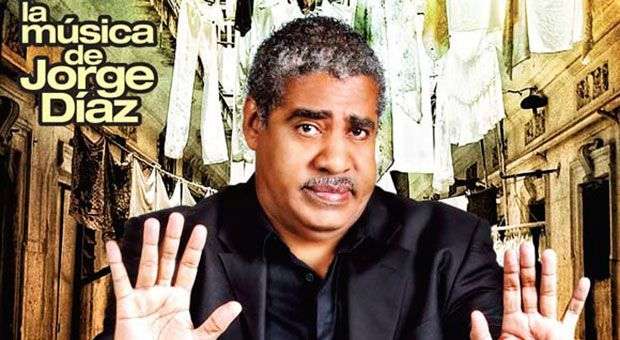 As some Cubans say, Jorge Díaz is one of those humorists that make us die laughing. He is really good histrionically; he is witty and agreat connoisseur of the national idiosyncrasy. This “mulatto”, as many people know him, is also an excellent musician who has successfully combined his guitar with the trova tradition and his perspicacity to narrate gracefully the most threshed circumstances of life in Cuba.

This is not a secret for anyone, but just a few people know that Jorge Díaz is serious about writing music: several hits by the most important popular music bands were written by this humorist. He wrote the songs Ven, ven, ven and Me mantengo, which were made popular by Van Van; as well as La Habana me llama, by Manolito Simonet y su Trabuco.

Now the “mulato” surprises us with the album El Familión, recorded with BisMusic label and for which he wrote all the songs.

Maestro Adalberto Álvarez, author of the musical part of the album, highlights the maturity with which Diaz assumed writing each of the ten tracks of the album (plus a bonus track) which are interpreted by top Cuban singers.

One of the traits that characterize the album is the variety of genres it comprises. Those who listen to it will take a tour through the Cuban music, including song, conga, salsa and songo, with unique performances that turn each track into a ludic refined piece.

El Familión is a refreshing social chronic Diaz successfully accomplished with the aid ofarrangements made by talented artists as Manolito Simonet; Wilfredo “Pachy” Naranjo Jr; René Baños, Sampling’s director; along with famous instrumentalists like César López en the saxo, Roberto C. Rodríguez “Cucurucho”, in the piano, Yan Hernández and Jorge Luis Vila in the tres, among others.

This is Jorge Diaz’s second album, the first one was Chronicles –recorded with EGREM label–, which was completely dedicated to humor.

The followers of popular music will have in this album a new reason for dancing with his music, and though it was not conceived for making people laugh, it was certainly designed for dancers to have a great time at the rhythm of his songs.