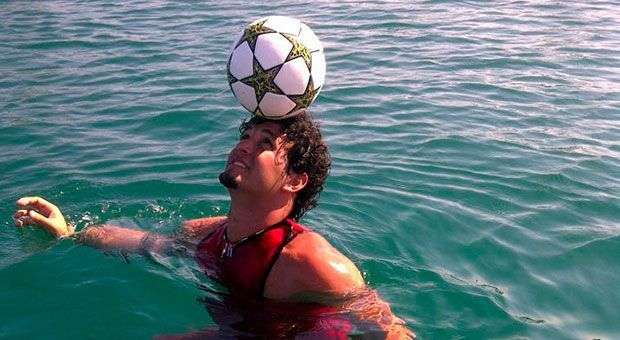 The upcoming edition of the World Cup, which will be held at several cities in Brazil, may count among its players with a young Cuban, Jhoen Lefont. Record-Guinness holder on ball control, 1503 hits to the ball in the water (floating) this Cuban,26, tries to successfully carry out a project that allows him to seduce with his talent, the fans of the most universal of all sports, which will gather in beaches, stadiums and streets of the South American nation.

Jhoen agreed to talk with OnCuba on the details of this project, the moment it is now and other goals to accomplish in this 2014.

Where did this idea of creating a project that allows you to be a direct participant in the 2014 FIFA World Cup Brazil come from?

It all started after achieving my last Guinness Record at the Hotel Nacional. My friend and representative Miguel Angel Pino and I noticed that my sport was perfectly linked with music , dance, choreographed water ballet , audiovisual media such as giant screens , and thus arrange a sports and cultural event that would serve to bring ball control in the water along the beaches and pools, not only in Cuba , but the world in general. We envision the project as a different show, where the audience was an active player. The main objective would disclose the exercise of ball control in the water, together with the talent of Cuban culture.

Brazil was one of the first places we envision as an ideal place to develop this project, and what better time than in the framework of the celebration of the World Cup. Between ball skills and football there is a very close relationship. Brazil is a nation bathed by beautiful beaches, ideal places for this kind of shows, and that during the days of the world championship it will be marked by a special cultural and sporting environment.

My dream is to show the world the existence of a different, interesting, new and exciting sport that requires a lot of sacrifice and dedication, like many other sports disciplines. Taking the ball control, like sports and cultural activities to all corners of the universe and thus get other children and youth, in the future, to emulate my head butting of the ball while floating in water. At present it is not known that any other human being do this practice, and contrary to what many might think, my wish is that there are other young people who are able to do it

What are the steps you must take to realize this project and how far have you taken it?

The first is to contact FIFA and the Organizing Committee of the World Cup. I have sent these instances an e- mail where I express my desire to participate in the activities planned to salute the Cup, and thereby contribute to a further enrichment of the event and, in conjunction with other exponents, give the fans an appealing and unprecedented spectacle. Another important step is to find an artistic director with the ability to put on a show at the height of what I aspire and current international requirements. In addition it is essential to find companies or sponsors who are interested in financing the project.

Who or whom is supporting you for this purpose?

To achieve the goal of being in Brazil, besides receiving constant support from my team, among which are my parents, my brother Alain Lefont, my coach Jorge Del Valle and my manager Miguel Angel Pino I must note, in this case, the assistance offered by the prominent journalist and sports commentator René Navarro who, with his wise experience, has provided many ideas in order to achieve what we all desire.

How has Jhoen Lefont matured in doing ball control floating in the water, since that time in February 2010 you hit the ball 534 times until the last record you set last August of 1503?

I’ve matured a lot! I remember when I started practicing this sport I performed it as a hobby, it was a hobby. Today I see things differently. I had the great pleasure to conduct my graduate thesis on the history of the ball control in Cuba in 2011. I think from study I could better understand the effort and dedication required to achieve a world record. I am convinced that my results are largely due to the acquired knowledge of figures like Douglas and Erick Hernandez pioneers of this discipline in the country.

Which were the essential keys for this progress?

Making a good physical and psychological preparation (must be a balance between both aspects) . Set goals to overcome every day. Bear in mind the saying that anything the mind can conceive, can be achieved. Confidence in yourself is the essential key

This latter result of 1503 hits, certified by the Guinness World Records, won third place in the category of Sports in the 2013 Guinness. Undoubtedly a clear signal of how complex and fascinating is your proposal. What did you feel when you got the news ?

It was really shocking news! Be included in the Top 5 Fans Record 2013 in Sports category, is something phenomenal. I am proud to have earned this result because somehow and could also represent my Cuba, my people, to the family of ball control. To me it’s like having the podium of a world championship awards in various sports disciplines. As I said, I feel that I put the name of Cuba very high just as do other great athletes of our country.

In case your involvement in Brazil 2014 is confirmed I am sure that for Cuban sports fans and athletes would a special moment. How do you rate the fact that Cuba would be represented by you in this great event?

It would be a great honor to represent my country in an event of this magnitude. It is the dream of every athlete to participate in a World Championship or Olympic Games.

Michel Herrera: Forget it, this is not jazz