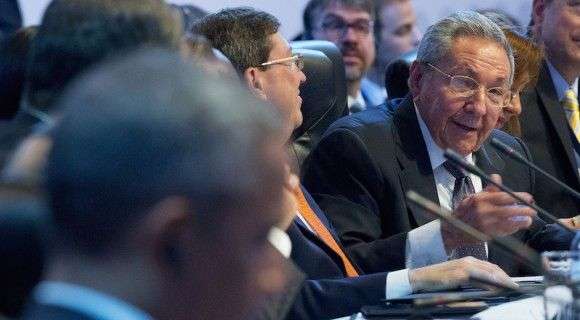 After shaking hands with President Barack Obama in a first face-to-face contact at the Summit of the Americas (Panama) on Friday, Cuban President Raul Castro continued to dazzle the public with the statements made in his speech on Saturday.

Castro opened saying jokingly that, instead of the eight minutes each president had been given for their addresses, he would take forty-eight, that is, the total amount of time he was owed for the previous six summits he hadn’t attended.

Expelled from the Organization of American States (OAS) in 1962, Cuba had not taken part in these regional meetings for decades. Its participation now occurs in the context of the US-Cuba diplomatic thaw announced on December 17, when the two countries exchanged prisoners and agreed to start talks to re-establish relations.

“I appreciate the positive step taken toward removing Cuba from the list of state sponsors of terrorism,” said President Castro, “a list in which it should have never been included in the first place.”

Cuba was added to this list in 1982, during the Reagan Administration, for advocating, according to the CRS Report, “armed revolution as the only means for leftist forces to gain power in Latin America (…) and playing an important role in facilitating the movement of men and weapons into the region.”

Additionally, Castro praised President Obama’s efforts to uplift the US embargo, and expressed his acknowledgments, on behalf of Cuba, for Obama’s “brave decision to get involved in this fight with the Congress of his country to put an end to the embargo”.

“My apologies to President Obama, because none of this is his fault,” said Castro in reference to the hardships endured by the Cuban people for decades as a result of the hostile policy of the United States towards the island. Instead, he blamed the ten American presidents who had preceded Obama.

He also apologized for his passionate tone, something of an unavoidability for him, he said, when talking about Cuba, its history and the Cuban Revolution.

“President Obama is a decent man,” added Castro, “I have read part of his biography -the two books which have been published, though not entirely-, and I think he is a humble man.” Castro attributed Obama’s decency to his social extraction.

In his speech, Castro also pointed out that Obama, like 77% of the Cuban population, had been born after the US embargo came into effect in 1961, hinting to the absurdity of maintaining a policy irrationally inherited from the past.