ronald
in Technologies of Communication and Media
0 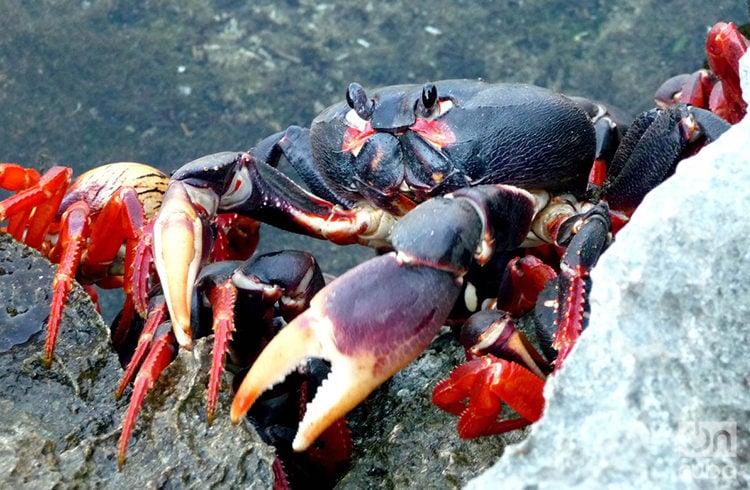 Around this time every year, the Guanahacabibes Highway in Cuba’s westernmost Pinar del Rio, transforms into a smelly, slippery red platform as the remains of red crabs crushed by the wheels of cars and trucks start to accumulate.

Hundreds of crabs leave their habitat, the forest, to reach the sea shore, where they mate.

The odyssey of the Gecarcinus ruricola, the Cuban red crab, does not end there. Once they are back in the holes of the rocks they inhabit in the bush, the females head out to the seashore again, where they spawn. When the eggs hatch, their offspring do the same journey back to the wilderness.

The Guanahacabibes Highway and its increasing traffic –a result of the growth of the tourism industry— are becoming a problem in the life cycle of red crabs, which now have a harder time reaching the ocean shore.

With their pincers up, as if defiantly defending their “natural” right to perpetuate the species, the Gecarcinus ruricola are the reason why many vehicles get their tires punctured on this highway. The damage drivers cause killing hundreds of crabs, however, is comparably higher, to the point that some of the stretches of this long road end up turned into a sort of malodorous red carpet.

“Humans are the worst enemies of these crustaceans,” said Abel Sosa, an expert from the Guanahacabibes National Park. “We block their paths with our constructions, and some people even kill them for their meat, even though it is not as suited for consumption as other types of crab meat. They become easier targets during migrations.”

Eating red crabs is a risky practice, given the toxicity of the meat of this species. “Red crabs metabolize a heavy metal called tungsten, which can be very dangerous for human health,” added Sosa.

The staff from the park are constantly promoting awareness among the surrounding communities in the peninsula, using local media outlets.

The sad story of red crabs may be even affecting the natural selection process: those who survive are not the strongest or the fastest, but those who were lucky enough, just by chance, to complete the journey without ending up crashed by a car on the road.