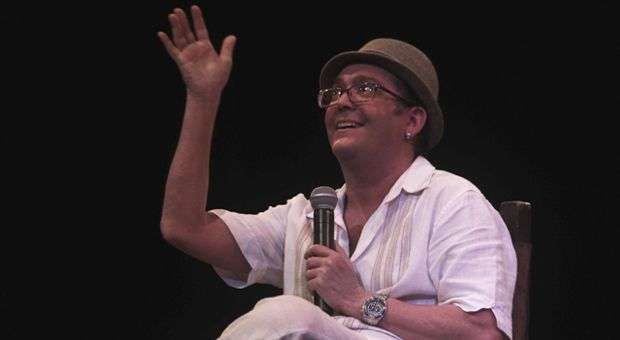 Rigoberto Ferrera, essentially an actor and comedian by profession, presented these days his show SOS Ferrera. With this recent performance, he, who was also emblematic host of the program of the Cuban video clips, pays tribute to the comedy group Nos y Otros, while continuing his work in the theater accompanied by live music.

This “resistant” actor, as he defines himself, throughout the interview to  OnCuba talks about his work and humor on the island.

What doesNos y Otros represent for you?

In 1994 when I participated in the second Aquellarre contest, I started trying to learn from that movement, which did not come from an academy, but compared to me know much, because I had only an inkling of what it the humor was. Among the participants of the event was Nos y Otros which was a group of intellectuals, linguists, art historians, journalists and writers who came from a literary group and later became part of the humor movement. As early as 1996 I became one of them, kind of directing the scenic part and I both acted and nourished by all the cultural baggage they had in terms of humor. For me the group set a tone, which helped me recognize humor from other viewpoints, especially the literary and dramaturgical ones.

What is Nos y Otros for Cuban humor?

For Cuban humor it mainly represents another approach to the humor, not so much at the scenic, but at the dramaturgical level. I think they are for Cuban humor essential. When speaking of Cuban humor in the 1990s you have to talk about the group, for its validity. SOS Ferrera, my current show is based on texts from the group and it is amazing how valid still is. I think that although they didn’t have acting level but they did make a contribution to culture. Their texts are far ahead of the time tehy were released, yet contextual, and transcended the passage of time. When a work transcends time, something it must have.

Nos y Otros was full of controversy,they  were very controversial and were censored a lot in that time. The scenic humor should feel proud to have had a group like this that had so thoughtful texts conceptually, which otherwise was dust and ashes.

How does Rigoberto Ferrera prepare for a one-man show?

Processes are different. Each show is framed in a circumstance X, on a need to express something, and since I started to date, Cuba has been changing as every country and system, and so the individual has been constantly evolving. Before I made versions of the texts, then came a time when I wrote them, and before that I went through a collective creation too, until I learned to write my own way. All within the one-man show is possible, provided it is in chaos with order. Because humor is so chaotic, irreverent, is anarchic. Right now I’m experiencing from another point of view is that of the collective, because the theater is collective. My thinking is associative, yet you have the weapons to address that, everything flows.

What advantages and disadvantages does the theater have?

At the theater I do not see any disadvantages. The only difficulty that I can see is that when the function ends, the audience goes home and tomorrow is a new day. The theater will always get the account in that sense, is ephemeral, very of the moment, but that is precisely the advantage you have. The audience is sitting there in front of you, for an hour and a half or two hours, feel the energy, you know the psychology of the audience, of that mass that is giving you sensations you are giving others.

When you have to perform in a theater for  five thousand people, there are five thousand with many problems or situations that go there to have fun, to have a good time. There is another part of the audience that will receive a message, make a catharsis and hear what perhaps they are not able to say. I give them everything I think on stage. So for me the theater is the only place where I feel completely happy, because I do what I want, say what I want, and luckily the public has assimilated it

Many believe that humor has held forums for debate and agendas that should have been in the media on the island, what do you think of this?

Doing theater has never caused a revolution in the literary sense of that great word. True, in the theater we say many things but that’s not new. By tradition here in Cuba, the vernacular theater, Covarrubias, Teatro Marti, the National Show Assembly, have always been as a platform to expose the problems and situations that are wrong, negative events, bad habits…… I think the theater, especially humorous, is never going to fall in low because it is the only place we have to say all the truth, or at least mine, is not the only one, but it is my truth.

The acting histrionics distinguishes you, what else would you add to an assessment about you?

Resistance. This is an endurance race, not speed, the more obstacles there are, the stronger must be the thought to continue doing theater and keep doing humor. And not to be overwhelmed by the vulgarity in the show.

But if there is something I would definitely characterize me is the resistance, which I think is what defines the Cuban.