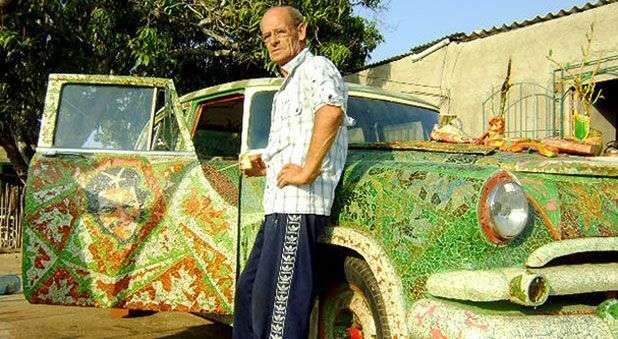 That a foreigner is living in Cuba like at home, and on top of that with his own ration card and in a humble place, can be for many an act of madness. Rafaelle Testagrossa (a Cuban nationality Italian citizen) illustrates the example. On the outskirts of the city of Las Tunas is very possible to find him dealing with his muses, clinging to our daily lives as a man born on this island.

“The Cuban is rich and does not know it. Nowhere else you can live like here. I know well the life outside this country. “The phrase does not catch much, as the ease and simplicity with which it is said. And while his lips are closed, the vocal cords of the time reflected on the face and the expression of his face still articulating truths from silence, perhaps on behalf of unease and insecurity felt by visiting his homeland, or of those memories that move him to a too hard childhood, there, to imagine wrapping Yam Rafaelle and Denise Raffaela, two offspring for whom he will breathe Cuban air until the end of his days, here.

“I wanted to know Cuba, he says, had heard that this is a peaceful, free place, with a beautiful nature, cities without aggression problems, where people can walk down the street any time … and I decided to come one day, 18 years ago.”

Rafaelle had no idea he would end up falling for this land and its people (so he says) or leave behind the onetime furniture factory (family inheritance), two adult children, Italian cuisine, its own past, fragmented into  “pieces good, bad pieces “. Never crossed his mind that a fortnight’s is the most he can stand away from Cuba, even when he is in Italy.

He never imagined either, without having had the inclination or skills for artistic activity (not as a child), the Cuban environment would cause an irresistible passion to create. Back in Italy, Rafaelle had no time to flirt with creativity. “I found that here there are conditions for making art: this tranquility, landscape, life, the ability to make things with patience, no pressure.”

In fact, his countrymen would not believe the “workshops” where the muses fall to undress the imagination have been the shade of a lemon tree in the backyard of Raquel (a neighbor in La Victoria), this gentle bend under the bamboos of the Cornito (dwelling of poet Juan Cristobal Napoles Fajardo, in the nineteenth century), a section on the skirts of the urban landscape…

Curiosity, and even awe, causes the use of glass: little or no function exploited here in a work which, as he explains, “I do not draw or sketch first, but that I have in my head and I actually do it straight “.

The trigger was that “woman of glass” (live model coated with this material) that was followed by a Dodge car, clothing, shoes into disuse, belts, luggage, hats, chairs, domino game (ideal for power outages and suitable for blind people), guitar, accordion, bass, trumpet, maracas, bongos, claves and other very Cuban instruments.

With extreme patience decorated room 218 of the Hotel Las Tunas and rode a mural at the Deauville Hotel in Havana: works donated entirely because, as they say, “no I create to sell.” But among all his works feels special affection for Maceo box and two of Che, who admires a map of Cuba (exposed in Torino), while waiting to continue “crystallizing” the example of other personalities.

With extreme patience he decorated room 218 of the Hotel Las Tunas and set up a mural at the Deauville Hotel in Havana: works donated entirely because, as he says, “I don’t create to sell.” But among all his works he feels special affection for a Maceo painting and two of Che, whom headmires;  a map of Cuba (exposed in Torino), while waiting to continue “crystallizing” the example of other personalities.

A set fixture in the Romerias de Mayo in Holguin and Las Tunas plastic lounges (where he won awards), Rafaelle also makes you think with his performances about smoking, AIDS prevention, the horrors of war … His work, framed in the trend ‘s called Arte Pobre, became a spokesman for many of the present realities. This is a simple being of 69 who says life is not enough to express all the thoughts he has in mind.

Unaware of this work, but scattered among friends he dreams to put together and expose someday, for some perhaps this man is an Italian increasingly common to the eyes of those who see him walk with humble appearance, looking for crushed glass that he covers wiith glue, “in all that lies in his path.”

Some people do not understand him. He is not worried. He just want to be here, in a materially much poorer country than his, where, he says, he breathes in  peace at home and pour the sensitivity he never imagined carrying inside: to where others fly to create and live better.