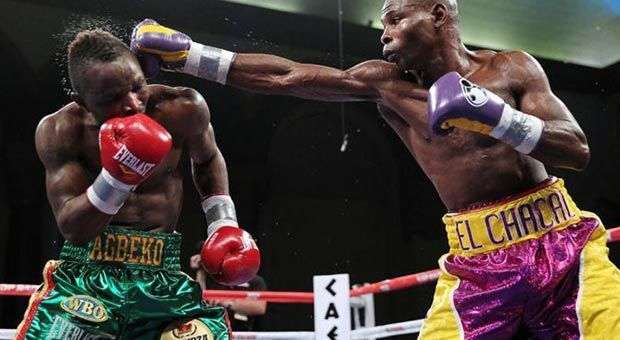 “Boxing is me,” the legendary Kid Chocolate said with total self-confidence while conquering New York rings and delighting everyone with his elegant clothing in the thirties of last century. This Saturday the picturesque phrase was present again around the Big Apple, claimed by two Cuban boxers, worthy heirs of that illustrious man from El Cerro neighborhood .

Erislandy Lara (19-1-2, 12 Ko) and Guillermo Rigondeaux (13-0-0, 8 Ko). The first one changed his interim belt by this of the World Boxing Association (WBA) world super welterweight champion. While Rigondeaux, twice Olympic champion as amateur, kept the 122-pound universal belt in the WBA and the one of the World Boxing Organization (WBO).

Lara gave a master class on the ring to Austin Trout (29-2-0, 14 Ko). The fight was held at Brooklyn’s Barclays Center and he won by unanimous decision in twelve rounds (118-109, 117-110, and 117-110). Punching and not taking while rhythmically dancing in the ring, undeniable hallmark of Cuban fighters. It was an indecipherable style for his opponent. “I come from Cuban boxing school, so I say that Trout was caught by it” Erislandy stated.

From the first round, Lara’s punching accuracy and feet speed became indecipherable enigma for Trout, who could just hit few considerable punches, showing himself out of reach and without weapons to change the course of the battle. From the eighth round the Cuban gradually increased his fighting pace, reaching the climax in the eleventh, when he sent Trout to the canvas with a powerful left.
With this victory Lara is very well positioned to face Mexico’s Saul “Canelo” Alvarez, to who he quickly heat up the atmosphere by saying: “I want to tell him that I did it better than him against Trout, so I ask him to step into the ring with me”

The virtuosity of Guillermo Rigondeaux seemed, a priori, an insurmountable obstacle for Joseph Agbeko. What happened in the headlining bout in the Boadwalk Center, New Jersey, validated the statement above. I imagine the audience went home not very pleased because the African did nothing for the show, apparently aware that provoking the “Jackal” from Santiago would not be a good choice.

Rigondeaux met and even at times accelerated his fighting pace, something unusual for him, but definitely Agbeko was not willing to receive an excessive beating. In the end he achieved a unanimous decision with identical 120-108 on the cards. At this point it’s not a secret for anyone that there is not an opponent in a position in the 122-pounds to face the Cuban’s mastery. Perhaps, that is why he has already set his look on an opponent of the next higher division.

In that sense Rigondeaux noted: “If Nonito accepts the challenge, I’ll provide him a beating again, he is still traumatized from the one I gave him”, direct reference to the fight in which he beat Donaire, favorite of the boxing moguls, in April. Rigondeaux went even further and also predicted the same result if facing stars of the 126-pound division as Orlando Salido and Ukrainian Vasily Lomachenko. Five words ended up by summarizing his current status, “I’m number one.”

Cuban boxing is on party. Here on the island we swept the Russian squad that faced us as part of the 4th World Series organized by AIBA. A day later, Erislandy Lara and Guillermo Rigondeaux gave continuity to the trail of professional boxing titles treasured by Cuba, which began in the early twentieth century. Congratulations!

Semester at Sea cruise back in Cuba