carrasco
in Technologies of Communication and Media
0 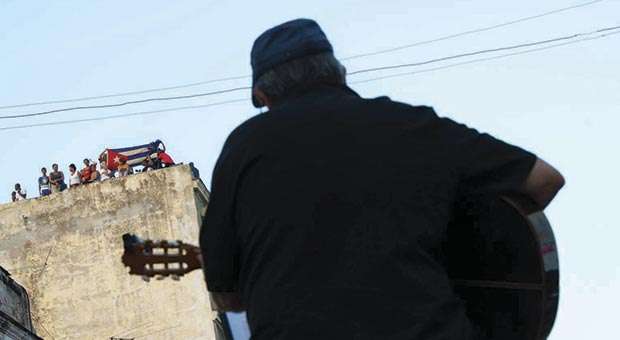 The book Por todo espacio, por este tiempo, comprising more than 200 images and 36 chronicles on a tour by Cuban singer-songwriter Silvio Rodriguez through Havana’s neighborhoods, which started on September 9, 2010, has been released for sale already.

The main characters of Por todo espacio, por este tiempo, produced by Monica Rivero and photographer and producer Alejandro Ramírez, are “the humble Cuban neighbors that attend Silvio’s performances”, as stated by journalist Rosa Miriam Elizalde last Friday during the launching of the book at the Pabellon Cuba.

Silvio and other artists like Omara Portuondo, Polito Ibañez and some others have visited more than 56 neighborhoods in the capital. The common element among all of these neighborhoods, including El Fanguito, Atarés, Pogolotti and others, is the lack of cultural proposals.

During the final editing stage of Por todo espacio…, they had already offered 44 concerts in 44 different locations. The tour has continued in more than 56 neighborhoods and it seems it isn’t over yet.

Mónica Rivero told OnCuba that Silvio has not outlined a final point for these performances.

“Silvio said he would only feel satisfied with the tour and would only put and end to it when he feels the reasons that led him to carry out the tourno longer exist. And he is certain that is not going to happen in the short-term”, she explained.

OnCuba also met with Mónica Rivero and Alejandro Ramírez, the authors of the book, in order to learn more about it and about a documentary on tour Alejandro Ramirez will premiere next August 28 at the Chaplin Movie Theater.

What can you tell us about this experience, about being so close to complex life stories and to write about them?

This is a difficult job. You don’t openly ask people from the neighborhoods about certain things and you don’t openly share experiences and anecdotes you learned there. First of all, because there is a human being behind every story and I think that must be respected.

We always told people what we were looking for in their testimonies. At the beginning of the book I make some sort of declaration of principles, where I state how I am going to tell all those stories.

I didn’t want to say Silvio was taking light to these “dark” and “isolated” places inhabited by “ignorant” and “wild” people, which has a lot to do with the stereotype on these neighborhoods. There are very interesting people and there are very complex phenomena.

Professor Daniel Salas gave a helpful clue on that. He suggested me an approach, to portray Silvio returning those neighborhoods what had originally started there. These are the origins of the traditional popular music.

Silvio was born in a poor neighborhood in Santiago de las Vegas, he grew up in Centro Habana, a municipality in ruins. His music, the music he shared with them also comes from there.

Did Silvio contributed with your work with any ideas while you were writing?

Silvio was always very respectful of our work. He read the chronicles as any other user of the websites they were published. Sometimes he shared some comments. Some other times he used to come to us and talk about a particular story that had caught his attention.

We interviewed him twice during the writing stage, and we always asked him to do some sort of introspection to know why he was doing that, how did he feel about it, what had changed during the process. That is also comprised in the last part book.

What neighborhoods left an imprint on you?

Atarés (in Cerro) was a strong experience. In other neighborhoods farther from the city there is a slower tempo and perhaps there is more innocence, the rhythm is slower. I don’t know. That’s my perception. However, Atares was very agitated and violent.

Flores in Boyeros was also very violent, with high levels of alcoholism. That’s just to mention a few, we have visited 56 neighborhoods already.

It would not be fair to say people there are not interested in Silvio’s music, but it is obvious that Cubans (not only limited to a neighborhood but in their daily lives) don’t sit to play domino or throw parties with that kind of music. What was the real interest you noticed in the neighborhoods towards Silvio’s music?

Rather than music, it is the fact of setting up a stage in their neighborhoods and to perform there. For them, that’s a feeling of visibility. People used to say all the time: “someone remembered us”.

In addition, Silvio Rodriguez is a personality; he is one of the most important figures of the Cuban culture.

Besides, even though Silvio does not make popular music –he is part of something else already, another circle in the identity of the country–, it is hard to find someone who does not know one of his songs.

The tour was already documented on a book. Then, why did you decide to produce a documentary about it?

These are entirely different languages. The book is a set of chronicles by Monica Rivero and a group of photographs I made. Yet, the audiovisual will give much voice to the people. It will allow to see the reality of those people in those neighborhoods but not static in paper but in movement.

How have you been able to handle the creative process of the documentary on the tour?

The book and the documentary are different processes though they supplement each other a lot. The documentary will convey short and ephemeral life stories that are not included in the book. Nonetheless, they both focus not only in documenting the tour but also in showing Silvio’s reasons to carry it out.

This tour started and continues in neighborhoods considered to be unattended in Havana. How to film these people when you are also recording their misery?

These neighborhoods have been certainly not favored in Havana. Filming their inhabitants is possible by entering their world as humbly and naturally as possible.
On the other hand, these people are eager to tell their stories. I usually say this is going to be a catharsis documentary considering people represented very well their realities in front of the cameras after the initial contacts with them.