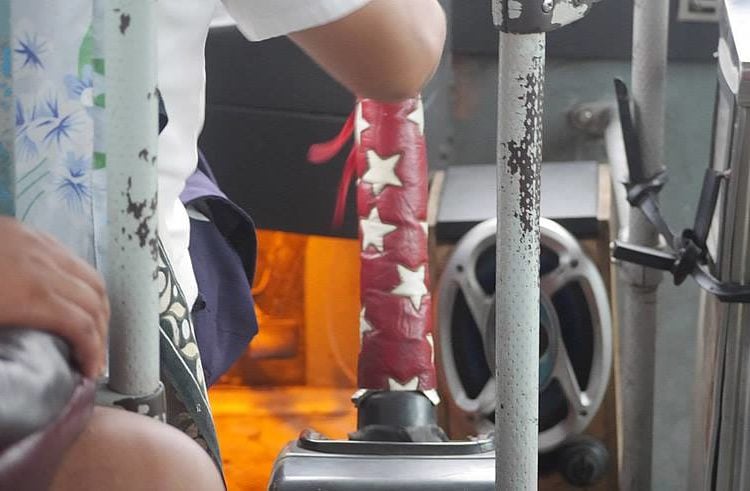 Since the electronic billboard has been removed in 2009 the flagpoles are usually bare these days, almost forgotten. A new flagpole that has been getting all the attention the past few weeks is the one on the United States side of the fence, the one that will fly Old Glory later in July. Like its neighbors across the street, it has been sitting bare since it was erected almost a month ago.

For those of us who have used the services of the Interests Section to file for visas, renew our passports, vote, or get something notarized we know that it doesn’t need our flag to fulfil those missions. In truth the Interests Section already functions sorta like an embassy; so much so that the building is often referred to colloquially as the “American Embassy” in conversation on the streets of Havana.

Its position on the Malecon seawall in the prominent Vedado neighborhood makes it the most conspicuous of embassies, I mean Interests Sections, on the island. It also boasts the largest diplomatic corps and offers more visas per year than any other country. These things will continue to be true after the embassy opens and the flag flies.

What will change physically for us here in Havana will be the flag on the flagpole.

Secretary of State John Kerry will be here in Havana for the flag raising, but it remains to be seen whether the stars and stripes will be flying solo its first day back on the job. Will the Cubans fill the sky with numerous copies of their flag to remind the foreign press and visiting dignitaries where they are?

When the Cuban flags are raised on all of those empty poles in front of the Interests Section it is a spectacular sight; almost 100 giant sheets of cloth held aloft by a stiff sea breeze. Actually Mr. Kerry might want the Cuban flags strung up because they cast a great shade over the front lawn of the Interests Section in the scorching Havana summer sun.

While most of the world’s attention will be focused on the opening of the embassy in Havana, in the Embassy district of Washington D.C. a very jubilant group of Cubans and supporters will also be hoisting the Cuban flag in front of the newly opened Cuban Embassy.

Considering Cuba has held out for more than 50 years against an economic blockade from a world superpower it would seem as though the big celebration should be happening at that flag raising in Washington. But the world is obsessed with America like America is obsessed with the Kardashians, so our flag in Havana seems to be getting all of the media attention.

As someone who lives in Havana I know that the flag in front of the embassy won’t feel alone. American flags are in no short supply in Cuba’s capital in the form of spandex pants, bandannas, as stickers on cars, busses, and pedicabs, as well as on some products like non-dairy creamer or Barbasol Shaving Cream (MADE IN USA!) on Cuban state run store shelves.