byTania Lorenzo
in Technologies of Communication and Media
0 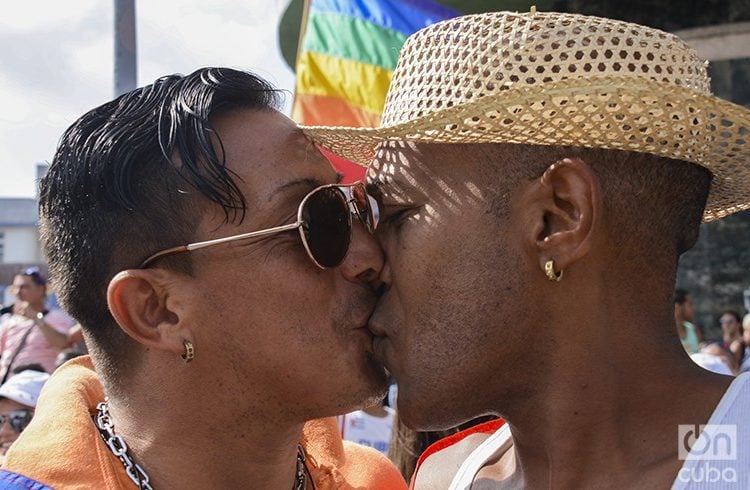 It’s 4:20 in the afternoon in Sagua la Grande and, like every Saturday, Adrian is waiting for the bus headed for Santa Clara. He tells me that Yunier will board the bus at the stop called “Sietecito.” They will look for each other in the crowd, kiss each other on the face and share the small seat.

An hour later, when the aging Giron-brand bus arrives at its destination, Adrian and Yunier will be different people. They will laugh as they please and put away all caution. They will have sex in the shower of a hostel, eat together at a restaurant (where no one cares whether they hold hands or not). They will ask each other about study and work, about how the home repairs are coming along and how the sick grandpa is doing. At around 10 at night, they’ll head over to the El Mejunje cultural center to forget about the world for a few hours.

They will forget, Adrian tells me, that Yunier’s parents (his in-laws) don’t want to see him anywhere near their son and even hang up on him when he calls the house. He can’t even be with his partner in his own house, because his father warned him he would have trouble if he took any “fags” there. To forget and to be together as a couple…this is what they want this afternoon, and what they’ve wanted for three and a half years now.

It’s June 27, however, and Adrian claims to be happier. “They legalized gay marriages in the United States yesterday and, believe me, they’re the ones who set the rules around the world. You’ll see how they legalize it here in no time,” he says confidently, with the credulousness of someone who doesn’t quite believe his own claims.

For more than 20 years, the city of Santa Clara has been welcoming hundreds of people from different municipalities and nearby provinces (such as Cienfuegos and Sancti Spiritus) who seek refuge in the gay mecca that El Mejunje has become.

That is how Heydi, a girl from Sancti Spiritus who studies at the Marta Abreu Central University of Las Villas and one day dreams of marrying a woman and raising children with her, also sees the establishment. Right now, she does not see this as something within reach, despite the work in defense of sexual diversity being done by Mariela Castro Espin, head of the National Center for Sexual Education (CENESEX) and daughter of President Raul Castro.

“There are dinosaurs up there who don’t get it and put obstacles in their way,” the young woman affirms.

There has been no shortage of debates and tensions (some of them visible) “up there,” such as those that arose during the first National Conference of the Communist Party and the debate surrounding the new Labor Code. There have also been discussions that fall on deaf ears, stemming from the reticence that stills exists with respect to the issue and which has been less visible, because it’s become politically incorrect to be homophobic.

“Many who once regarded homosexuals as the scum of the earth are now opposed to opening up completely to the issue. They are the ones who say that our society isn’t ready,” notes Heydi, who is very close to groups that call for the institutional acknowledgment of equal rights for the LGBT community.

El Mejunje has been one of Cuba’s most tolerant places for years, in large measure thanks to the work of a man who didn’t wait for “the right time,” a man ahead of his time who also had to confront conservative postures to defend his cause. Ramon Silverio runs a place where prohibiting things is prohibited.

“In Cuba, people didn’t wait around for sexists to all agree and accept gender equality before fully incorporating women into society. We also didn’t wait for racism to disappear to acknowledge that all men are equal before the law. So, we don’t have to wait for our society to regard the union of two people of the same sex as something totally normal to make it legal. On the contrary, laws should mold people, set up norms, eliminate injustice, sweep away prejudice and guarantee the rights of people with a different sexual orientation,” Silverio argues.

More than 15 years ago, several sectors were calling for a modification of the Family Code in Cuba that would at least acknowledge the consensual union between two people of the same sex, as a necessary first step towards legalizing their marriage. But, why limit this progressive change to the Family Code?

According to the legal experts approached, Article 2 of the current Family Code establishes that “marriage is the voluntary union between a man and a woman who are legally capable of this action, for the purposes of living together.” Since the constitution defines marriage in similar terms, one cannot change the Family Code without also modifying the constitution.

But the proposal for a new Family Code hasn’t even reached the legislature and the issue isn’t on the agenda.

“In Cuba, discrimination against homosexuals ceased being explicit and now works through negation, through deafness or blindness,” Joel, a law student at the University of Santa Clara, claims. “That is perfectly feasible in a country with the largest parliament in the continent but where representatives tend to unanimously agree with what a handful of people decide. Among those deciders there are people who continue to see homosexuals as weird creatures,” said the young man who considers himself bisexual.

The election of the first transsexual district representative made news more than two years ago. Adela, the first transgender person to occupy government office in the country, demonstrated that people were more ready to acknowledge her equality than government power structures.

Somewhat disheveled and straightforward, the nurse at the Caibarien hospital believes that Mariela Castro is in a difficult position. Being the president’s daughter serves both to get people to listen to her and put obstacles in her way. That said, her work and that of CENESEX activists are responsible for the noticeable acceptance towards differences we’ve seen in Cuban public opinion in recent years.

Maria Teresa is 56 and says she could not tell her grandson that the union of two women is something normal. “That’s deviant behavior and exposing minors to it could lead them to adopt similar behavior. Don’t even talk about it! They’ve already gone too far with the soaps,” she concludes, somewhat worked up. Maria Teresa is not alone.

That is why perhaps Adrian, from Sagua la Grande, is right, and, just as the exclusion of homosexuality from the list of WHO diseases in 1990 had global impact, the United States’ same-sex marriage law will have profound repercussions in other parts of the world.

Friends of Adrian and Yunier, on the other hand, doubt that the US Supreme Court decision will shift the balance for LGBT rights in Cuba. “It would have to be like a meteorite of civilization striking this Jurassic park,” they jokingly say, sitting in the tight crowd watching the Roxana Rojo and other transvestite shows at the Menjunje.

For them, the progressive Cuba of social achievements and the search for justice is being left behind in the area of sexual rights.