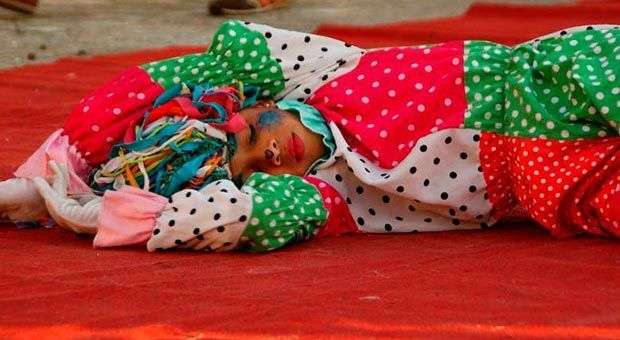 With love and in women, youth and green style.

If in 1969, the state of New York starred one of the music and arts festivals with the highest youth congregation in history under the slogan 3 Days of Peace and Music, Havana, more than four decades later, bets on Love in, an event that dedicates its 6th edition to women and ecology.

On next November 15 and 16 , this Havana festival, emerged in 2008 as a tribute to the New Yorker festival, will return for the sixth time and will again take place on the grounds of La Cabaña cultural complex , from 2:00 pm to 3:00 am.

Although its real motivation might be as simple as making party for the so-called “festival of festivals”, the production team has taken seriously the commitment of the hippie counterculture movement from the 60’s of last century: peace, ecology, freedom and love, one of its founders and coordinator of the happenings and performances, Evry Smith, said.

“Love in is to spread young art, unrecognized art not only by others, but by artists who are like hermits,” Camila Lozano, fine arts coordinator, noted.

“There are many people who can be doctors or any profession and have their artist kept at home. This festival trie s to rescue them for the public, “Lozano added.

Peace, ecology, end of violence, green culture, cultural diversity and renewable energy have gathered in previous editions thousands of young Cubans from various aesthetic and ideological affiliations, from dissimilar subcultures or countercultural movements that coexist in the island.

Smith, who does not believe that there has been a hippie movement in Cuba, said that there are more and more people interested in ecology, peace culture , sustainability, cultural diversity and equity, Love in working lines.

“P eople already know what the environment is and have some information, but we can not speak of conscience,” the promoter stated.
To Lozano, it is not as bad as a few years ago. “Nobody raises awareness that if you do not throw out a paper, then you are collaborating. But young people are more careful than five years ago, “he said.

As Woodstock is icon of a generation tired of war and proclaiming peace and love as an anticapitalist lifestyle, Love in wants to take its message all over Cuba and helps creating environmental awareness with peace and equity.

“This time we have chosen the theme of women and ecology for which we have invited artists and leaders of projects,” Betsy Santos, general coordinator of the festival, told OnCuba.

According to Santos , the interest is “to show all the potentialities of women in society, not only as artists but in different specialties and their relationship with the environment.”

Although inspiring hippies listened to psychedelic rock, groove and rebellious folk, Love in proposes a party with Alami, Rita, Rochy Ameneiro, Victoria (CA), Isis Lores ​​, Bjoyce, Djoy, Klidas, Polito Ibañez and Descemer Bueno, among other Cuban musicians.
In addition, there will also be at La Cabaña a space for children.

Moreover, the Fresa y Chocolate room will host from November 18 to 22, the first audiovisual cycle on gender and environment in Cuba.

“It will be displayed works made by women and about women, dealing with problems related to environmental issues, from Cuba and other parts of the world,” Santos, who added there will be an exchange with filmmakers after the screenings, said.

The sample will have the support of Cinema Planeta, an international audiovisual festival based in Mexico, which will also develop a workshop with young audiovisual makers, to be held at San Antonio de los Baños International School of Film and Television.
The coordinator confessed being in line with other socio cultural areas of the country that, during 2013, have called for creative events dedicated to women, like the first Cuban edition of the Festival ¨Ellas crean¨ (Women create), which was held between September and October, in several provinces.

Love in is especially dedicated to Jorge Enrique Betancourt, who was part of the creative team as a photographer and audiovisual producer and died victim of cancer in 2013.