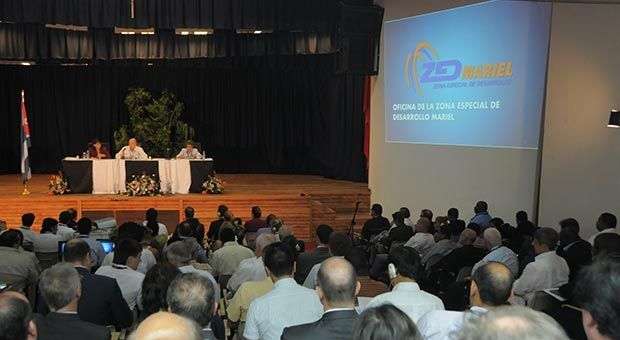 A clear message Cuba sent on Tuesday to businessmen worldwide: foreign capital already has the green light to invest in the Mariel Special Development Zone (ZEDM) , door of the island in its trade with the world in the coming years .

This was confirmed by Rodrigo Malmierca , Minister of Foreign Trade and Investment ( MINCEX ) , and Ana Teresa Igarza , Director General of the Zone regulator Office in two-handed lecture during the third day of the XXXI International Trade Fair Havana, FIHAV 2013 .

The colossal work, which spreads over more than 465 square kilometers in the western province of Artemisa, is already showing signs of vitality. According to the two officials, the office designed to process investment applications became operational in the framework of the fair; at the same time they announced the opening of the first 700 meters from the port of Mariel by the end of January 2014.

The decree signed by President Raul Castro and published last October made clear the main objective of the megaproject: contributing to the development of the island, by generating exports, sources of employment, financing, technology transfer and logistics systems.

Considered one of the most complex ever been executed in Cuba, the investment amounts to 900 million dollars, of which more than two-thirds come from a loan from Brazil.

According to expert criteria, Mariel may well become the harbor with better conditions to establish itself as the largest mega-port in the Caribbean, due to its geographiy, labor force quality and widespread availability of space for future expansion.
Others say that the opening will mark a starting point for the adequacy of the foreign investment law, which would make it attractive business with Cuba and reduce bureaucracy.

On guarantees, benefits and other incentives

According to Malmierca in the ZEDM special policies will govern that are more attractive to foreign investors, in connection with the established by Law 77, legislation that regulates the activity in the country.

Among the main advantages of the ZEDM are the exemption (zero percent) in taxes on profits-in the first 10 years, the use of the workforce and contributing to local development.

A special regime labor, creating a single system for the receipt and approval of projects, and the strategic location of the area as a regional geographical environment, are other advantages of Mariel.

On the other hand, they will provide important safeguards for dealers and users ( legal figures recognized by the law to act in the ZEDM ), among these , the full protection and security in the country, and free transfer abroad of dividends , profits or other operating income associated with their investment, both for companies and for foreign citizens .

To close the meeting both officials answered questions from the audience, referring essentially to issues of workforce recruitment. About this they pointed out that national non-profit employment agencies will be responsible for the selection of staff and at a professional level.

Payment of wages to the workers is done by the employing entity in Cuban pesos, under special conditions that encourage staff performance and stability, according to director Igarza . But they didn’t clarify how articulate these labor agreements are with the regulations governing the Labour Code, which is subjected to a process of discussion today.

What yesterday seemed a dream now becomes pretentious project of the Government of the Island to attract and inject fresh currency in terms of a prosperous and sustainable development, which it also contributes to stabilize the Cuban economy, plagued by years of productive inefficiencies in management.

Thus, Cuba is preparing for the scenario looming in 2015 with the Panama Canal expansion, a fact that will allow greater movement of large ships in the region.

In the most crowded trading fair in the last 11 years, the business rounds with multiple trading partners of Cuba will continue for identifying new business opportunities in key sectors of the economy, as well as the celebration of the National Day of Italy and Vietnam.

The fourth day of activities will also host conference on strengthening the alliance between the Cuban Medical Services Company and Biocubafarma , which will open sessions in Expocuba.

For its part, the Chamber of Commerce of the island will explain to foreign partners how to set up business in the Cuba, and the Cuban International Insurance multimedia will be launched.