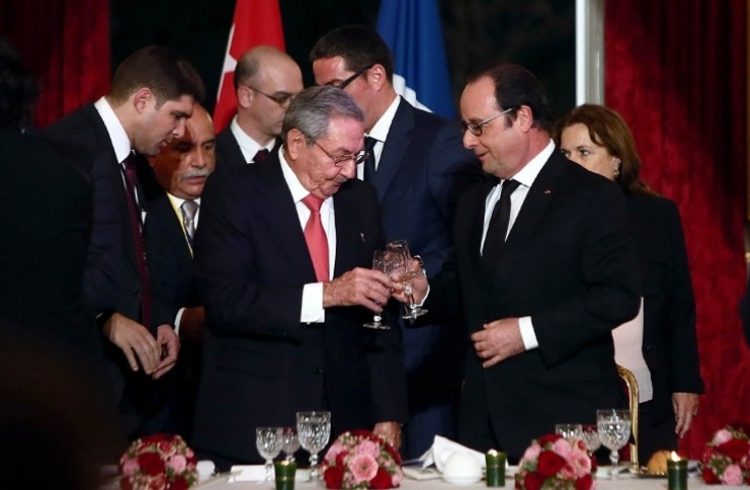 Cuba and France signed a bilateral economic agreement during the visit paid by Cuban President Raul Castro to that country this week.

Few details about the terms were divulged, but the agreement is undoubtedly connected to the recent restructuring of Cuba’s debt to the Paris Club.

France has become Cuba’s door to Europe, while the island is a promising land for French business people.

“As I said in Havana,” said President Hollande in reference to his visit to Cuba last year, “the French people hold Cuba dear to their heart.”

“France has been, and will be, an important business partner for Cuba,” said Castro. “French companies did business with us during the toughest years, standing their ground to the extraterritorial pressure of the U.S. embargo, which has been in place for over half a century. The French have contributed to the development of our country’s economy and society.”

“Important French companies have taken part in the recent development of the tourism sector in Cuba, the commercialization of Cuba’s classic Havana Club rum, and in the development of vaccines. This shows the ample range of opportunities that exist in the fields of research and development.”

Speaking at a press conference at the headquarters of Medef, Cuban Minister of Foreign Trade Rodrigo Malmierca said that Cuba has no intention to displace business people from other countries to accommodate American companies.

“We are not going to block American companies. They are also welcome. But our goal is to diversify our economic ties. We don’t want to depend on a single market,” he said.

Cuban Vice President Ricardo Cabrisas highlighted the development of the tourism industry on the island, that last year received 3.5 million visitors – a figure that could double once American tourists are allowed to travel to Cuba. In 2015, the number of French tourists visiting Cuba increased by 30%.

“We want to separate business management from the State,” said Malmierca. “For many years, our business managers were only allowed to do as they were told, and they got used to not making decisions and to wait for directions sent from the top. That will not continue to be that way. They must be able to make decisions on their own.”

France has voiced its intentions to help bring Cuba closer to the European Union. Many important French companies are already doing business with Cuba, such as Pernod-Ricard, Alcatel-Lucent (telecommunications), and Total and Alstom (power generation).

During Hollande’s visit to Cuba in May 2015, the two countries signed agreements in the areas of tourism, agriculture, biotechnology and pharmaceutical products, as well as oil and training.