Raidel Arbelay was born in November 1970 in San Juan de los Yeras, a small town in Villa Clara; he has lived in Ukraine since 1996. 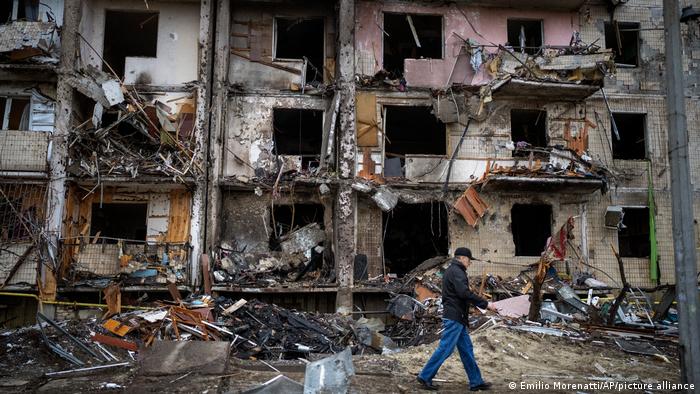 It’s after ten p.m. in the urban district of Darnitsa, southeast of Kyiv. Raidel Arbelay, a Cuban who lives in one of the buildings in the area, is sitting in the corner of the living room, away from the windows of his home, in the dark. The only light in the room comes from the screen of his cell phone, which lights up over and over again due to the messages that arrive, from Nikolaev — in the south of Ukraine — as well as from Poland or San Juan de los Yeras…

Outside, a light drizzle is falling and it’s a bit cold, maybe one or two degrees, but nothing significant for a country adapted to living below zero around this time. Arbelay has just arrived home after a more than 700-kilometer trip, but he is still dressed: he is wearing a gray sweater with a hood, dark jeans and boots, as if he suspected that he is going to have to go out at any moment.

“Here the situation is now tense again. All day I hadn’t seen any operations, it seems they were waiting for the talks to end, but a moment ago there were two bomb explosions to destroy a military unit that is nearby and my windows almost shattered,” Arbelay tells me. He is one of the many people who is living firsthand each chapter of the Russian military operations and the Ukrainian resistance in the most recent war conflict that has humanity in tenterhooks.

In the last few days, Raidel has hardly slept a wink. He is afraid — he tells me — and every night he begs for God’s protection: “I shiver, I had never felt like this before. It’s something I don’t wish on anyone, that feeling of not knowing what’s going to happen if you go to bed.”

The uncertainty has been much greater since February 25, when Ukrainian troops shot down a Russian drone that fell on a nearby building, about 700 meters from where he lives, destroying several balconies.

“We hadn’t planned on leaving, but as of that day, we decided that our children had to be far from here. I feared for their lives,” recalls Arbelay, who has seen his family get separated since the Russian attacks began on February 24.

First, his wife Margarita and his six-year-old daughter Marisa went to a subway station that has served as a shelter, while he and his 15-year-old son Miguel stayed at home. “We wanted to be together, but there are many people in the shelters. There is almost no air to breathe and we couldn’t all stay,” says Raidel, whose family is now far from danger.

Over the weekend, hours after the plane was shot down near his home, they left on his father-in-law’s bus for Poland and parted ways six kilometers from the Rava-Rus’ka border in western Ukraine. “I had planned to do the whole journey with them until they were safe, but it was very difficult to see them leave and not be able to change that destination. Since I left them, I spent about an hour crying until I got to Leopolis to catch a train to Kyiv.

“This return has been very hard emotionally. I feel better because they are safe, but it’s not easy to leave the children and not know what could happen to them or to me. Everything will be very complicated until I have them close again. My soul has been broken since I said goodbye because I don’t know if one day I’ll see them again,” says Raidel.

Now his family will be staying at some friends’ home in Krakow, near the border between Poland and the Czech Republic, and if in a few days there are no changes and the conflict continues, we are evaluating the possibility of them going to Spain for a while to stay with other friends who are willing to receive them.”

I decided to stay because in my heart I understood that I couldn’t leave this, I was going to feel like a rat. It’s better to be here in fear than to be on the run,” says Arbelay, whose mentality seems to be that of a Ukrainian with a great sense of belonging.

Precisely, when I hear him, I ask him how he came to Ukraine almost 30 years ago, but his answer is chilling: “I can’t talk now, they’re bombing.”

Raidel Arbelay was born in November 1970 in San Juan de los Yeras, a small town in the Ranchuelos municipality, in Villa Clara, with which he maintains eternal ties. His mother, his sister, his aunts and his cousins, who have been on edge for a week due to the tense situation in Eastern Europe, live there.

“I talk to them every day, what I don’t give them is a lot of details about what’s going on. My mom is hypertensive and diabetic, so just imagine, I don’t want to worry her more than she already is with the news,” Raidel tells me in a broken communication on Messenger or WhatsApp, wherever the messages come out first.

The Cuban family and his friends, from a distance, have been a fundamental support for this 51-year-old man, a profound believer. “I’ve never felt alone, my brothers’ prayers keep me company and protect me,” he says.

Arbelay perfectly knows how the former Soviet Union was, having arrived there in 1989 to study at the Institute of Machine Construction. Shortly after he graduated as an electromechanical engineer, he returned to Cuba and in 1996 decided to settle in the Ukraine, where he has ventured into various spheres, from baseball to forced labor in a stainless-steel plant as a metallurgical blacksmith.

“I was never able to practice what I studied, because in Ukraine engineers and university professors earn less than workers. Since I arrived here, what I did was play baseball, they paid me for that, and I was even a part of the national team until 2010,” he recalls.

The baseball part is no accident. Raidel has it in his blood and, like many Cubans, he tried to fulfill his dream of shining on the diamonds, but he was only able to play in an organized manner up to the provincial level in Ranchuelo. “I never managed to make the Villa Clara team,” he laments, although he acknowledges that he is very proud to be from the same land as Rolando Arrojo, one of the major Cuban pitching stars in the 1980s and 1990s.

He took that passion for the sport of balls and strikes to Ukraine, where he is still the home run record holder in the national league for his 26 home runs in the 1996 campaign. Although time has passed and he now occupies a position as support agent for the Swiss online Dukascopy Bank, Raidel is reluctant to turn his back on baseball.

“I’ve never stopped practicing, even recently I’ve been captain and MVP of the national veterans team,” he says with some pride and aware that his permanence in baseball allows him to stay close to his roots.

In Kyiv, before the first Russian attacks on February 24, there were already long queues in different markets. “People knew what could happen and everyone went to stock up on food and basic necessities. The queues continue, the problem now is that there are fewer things to buy,” says Raidel Arbelay from the solitude of his apartment in Darnitsa.

Although Kyiv maintains vital services (electricity, water, hospitals, markets) active, the situation has become very complex for all those who have nowhere to go or cannot take refuge far from the cities that are under threat from Russian forces because they don’t have the necessary resources.

“The shelters don’t have the recommended quality, that’s why many stay at home and in their bathrooms when the bombings begin. In these circumstances, the tension is very great because no one knows where an attack can come from,” says the Cuban.

Raidel is still not very clear about how this point has been reached, in fact, he never thought of such an escalation of violence for any reason. “From my point of view, I think that Vladimir Putin still hasn’t gotten over Ukraine since Viktor Yanukovych left the country’s presidency. He was his collateral here and by leaving the scene he lost many investments he had made.

“I understand that this is one of the main causes of what is happening now, but the worst thing is that I don’t see any short-term solution. It’s true that they have already sat down to talk, but Putin is a man who takes things to the end and said that in three days he would reach the Maidan. He’s been at it for five days and he hasn’t made it, so at some point, the attacks are going to be more intense. I hope that God gets into his head and he understands that he has to stop this conflict because he is the only one who can stop it,” explains Arbelay, who has thought about supporting the Ukrainian resistance.

“I’m a Christian and I’m not going to pick up a weapon to kill people, but I would accompany the army, treat the wounded and help in whatever is needed. I don’t want to be a hero, I just want this to end so I can be with my family,” says the Cuban, aware that in the current scenario no one can consider himself a winner.

“There are thousands of displaced people, there are already hundreds of deaths between the two sides and civilians have also died. That was inevitable from the moment the attacks began. They say they’re trying not to shoot civilians, but it’s almost impossible when you’re shooting at points in a highly urbanized city like Kyiv. In the end, in a war no one wins,” he says.

February is almost over in Kyiv. The drizzle and the cold wind anticipate, perhaps, some snow. Raidel Arbelay is still awake, he doesn’t know if he will be able to fall asleep in the middle of an excessively calm and tense night. “Now everything is like a desert. There is no one in the street and the lights are out.”