The international situation suggests that in light of the current conflict in Ukraine we are in the first chapter of the struggle for a new world order. 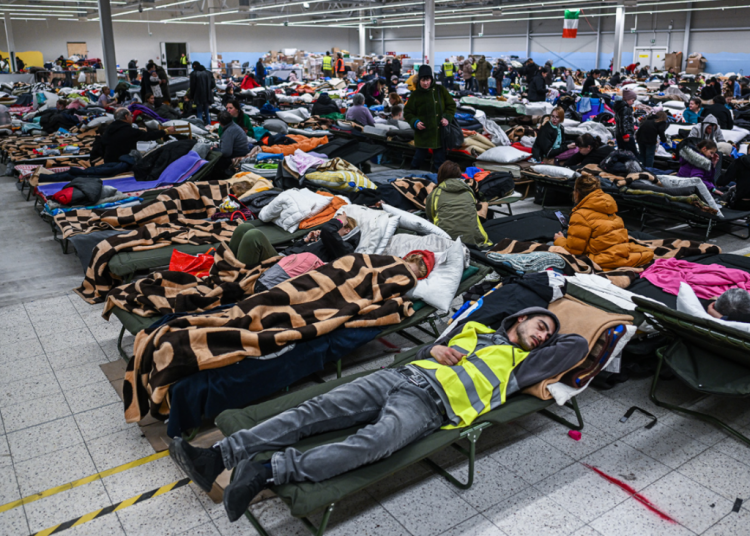 People who fled the war in Ukraine rest in a temporary shelter after being transported from the Polish-Ukrainian border on March 8 in Przemysl, Poland. (Omar Marques/Getty Images)

The Unipolar World ruled by the United States was born about 30 years ago, with the dissolution of the Soviet Union and its client countries. Described as a geopolitical disaster by Vladimir Putin, the fall was praised by the American Francis Fukuyama who stated in his 1989 article, “The End of History” and in his later book The End of History and the Last Man of 1992, that not only history had ended, but all wars, revolutions, social and economic conflicts. Thus, the world began a golden age without ideological contradictions, since fascism and communism had succumbed, an unparalleled period of global progress, thanks to the winning system, liberal democracy.

The Liberal Democrats were overjoyed when Fukuyama rose to fame. At last they had achieved, together with victory, the theoretical justification for why they were the best and the better. They would begin with globalism, the full freedom of man and the consubstantial progress of democracy, the creation of paradise on earth, a paradise in which other ideologies had failed. They would have every opportunity to do so, why not? If the world was unipolar and the United States, as the only world power, was in the lead. But it was not like that.

In the 33 years after history “ended,” 22 wars have been unleashed in the world, 36 regional conflicts with an unfathomable balance of 11 million dead, 36 cities completely destroyed and millions of refugees and wounded.

We see that Fukuyama’s projections were not at all precise in the elimination of wars, although the same author kept two causes so that they could be unleashed: nationalism and religions. Now, to what extent and how have these causes not always been a source of ideologies? Causes of war, of course. Fukuyama’s mistake is to have been totalizing based on his own neoconservative ideology,1 and to forget other fundamental aspects of human society and nature.

In 25 years after his famous book, the war that has the world on tenterhooks these days began to take shape. The triumph of a revolution in the form of a coup d’état, the Ukrainian Euromaidan in 2013, removed Victor Yanukovych, close to Moscow, from power and in May 2014 put Petro Poroshenko in power, a Ukrainian oligarch belonging to one of the 25 families that hold the economic domain of Ukraine, and that began to approach the liberal democracies of Europe and NATO, which in that same year took steps to integrate Ukraine into its fold.

In 2014, Russia annexed Crimea and the pro-Russian split of Donetsk and Luhansk took place. And, virtually, the Russian-Ukrainian war begins. Moscow makes several diplomatic requests so that NATO does not continue advancing towards its borders. But faced with the refusal, Moscow launches its full-fledged invasion.

With this step, Russia changed, perhaps forever, the current balance of the unipolar world order. Together with China, which has a claim over Taiwan, and whose sovereignty belongs to it since Resolution 2758 of the United Nations General Assembly, which recognized the People’s Republic of China as “the only legitimate representative of China before the United Nations” and expelled “the Chiang Kai-shek representatives from the position they legally occupy in the United Nations.” The United States and especially Biden, with a clumsy political vision and the influence of neoconservative thought, have facilitated the current solidarity between Moscow and Beijing, whose initial objective, in U.S. policy in the 1970s, was precisely the opposite: to divide them.

The international situation indicates that the current conflict in Ukraine — with the natural economic sanctions against Russia, and the alliance with China — may mean, and this columnist firmly believes, that we find ourselves in the first chapter of the struggle for a new world order, different from the unipolarity that the United States held for three decades.

A multipolar world, with respective and diverse geographical-economic spheres of influence. With different visions, my friend Fukuyama, of how each society, each country, with its particularities, should be organized based on the market economy or not, with the inherent risk that said choice entails. Ending the possibility of a world government, of a single version of reality, of the dominance of a single ideology, and of the boredom, stupor and docility of the “last man” in Nietzsche’s conception, not in his, in that this man was a happy gelding, happy only to be able to consume everything consumable, to justify everything, incapable of rebelling against anything, but with the immense problem of not having problems.

Three or perhaps four great czars on planet earth ruling their respective geographical regions. And it suddenly occurs to me, what will be the fate of Cuba, as a nation, in that fight of giants, whether the Russian-Chinese-U.S. multipolarity or the U.S. unipolar world wins? Because if one or the other wins the confrontation, Cuba would always remain in Washington’s sphere of influence. And if the world is divided like this, no superpower is going to look over its fence to see how the other’s countries are doing, let alone protect them. No? We will have to think about that.