Thousands of people have reached the border in recent months. Once there, they can take different paths to try to enter the United States. 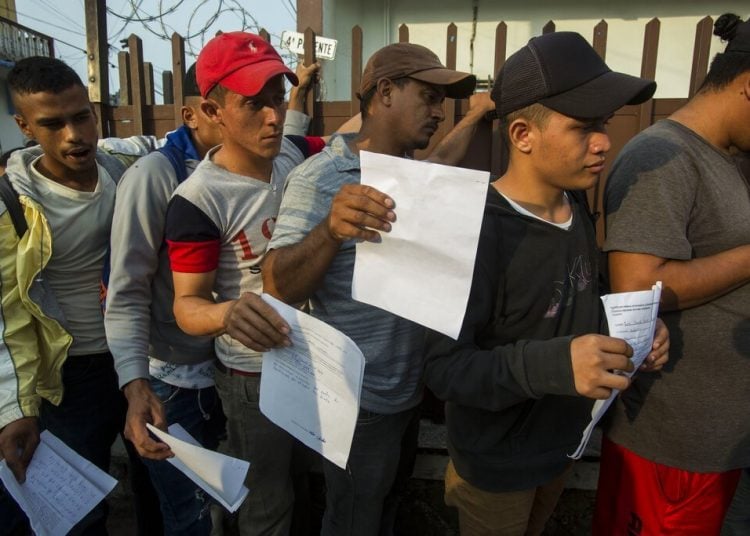 Central American migrants line up outside the Mexican Refugee Aid Commission in Tapachula to obtain the necessary documents that allow them to stay in Mexico, on Thursday, June 20, 2019. Photo: Oliver de Ros / AP.

The harrowing image of the baby who drowned with her father in the Rio Grande illustrates the risks that migrants are willing to take to reach the United States in the face of the increasingly strict policies of President Donald Trump’s government to prevent their entry.

For many of the migrants trying to get to the country, it is a matter of waiting, waiting and waiting a little longer to get the authorization to enter, unless they try to force things and cross the border, a dangerous and sometimes lethal decision which on occasions involves entering the scorching desert or fording the Rio Grande and its deceptive currents.

Here is a look at how migrants try to reach the United States and what they find:

There are two ways

Hundreds of thousands of people have come to the border in recent months, many of them families fleeing violence and poverty in Central America. Once they reach the border, they can take different paths to try to enter the United States.

One way is to present themselves at the official border crossings, known as ports of entry, and applying for asylum. This represents the beginning of a legal process that often takes years, and in which they must demonstrate a well-founded fear of persecution in their country of origin.

But the Trump government has implemented a measure along the entire border that limits the number of asylum applications received daily at the ports of entry. It is known as “dosing” and has created huge lines and a months-long wait for people in Mexican territory, often besieged by violence and drug trafficking, just for an opportunity to seek asylum.

For example, about 80 people are processed daily at the border crossing near San Diego. In other cities, days pass without a new application being accepted.

Several border cities in the United States have their own waiting lists. A recent estimate indicated that the total number of people who are waiting is about 18,000.

And the waiting list is not the only U.S. government measure to keep migrants in Mexico.

Under a policy announced in December, many of the migrants who requested asylum must wait in Mexico as their cases advance through migration courts in the United States. The measure applies mainly to people from Central America.

Previously, many of the people seeking asylum were allowed to enter the United States, where they were either detained or released within the country as their cases advanced through the system, a process that can take months or years, and which allowed many of the migrants to disappear within the country.

As a result of Trump’s new policy, more than 14,000 asylum seekers are waiting in Mexico for their cases to be decided.

But many are frustrated by the long wait or don’t even bother to get on lines. So they use another alternative: They openly or clandestinely cross the border outside the official ports of entry and surrender to the Border Patrol agents, who proceed to detain them at facilities inside the United States.

In the case of the two Salvadoran migrants in the photograph, Óscar Alberto Martínez Ramírez and his daughter Valeria, they decided to cross the Rio Grande after waiting two months in Mexico to request asylum, according to various press reports.

When migrants walk or sneak to the U.S. side of the border they are arrested, and Border Patrol agents take them to processing centers, where they are given a health checkup and their criminal records are checked.

Due to the overwhelming increase in the number of migrants, the Border Patrol has opened several temporary facilities for detention and processing. Government inspectors and lawyers report that these places are extremely overloaded.

A recent report from the inspector general about a processing center in El Paso revealed that there were up to 900 people crowded into a space designed for less than 200. Some people were standing on toilets and many of them had been there for several weeks.

The migrants refer to the Border Patrol stations, usually the first place where they are detained, as “coolers” because of their low temperatures. The processing centers are called “kennels” because they are surrounded by bars.

It is assumed that people in the custody of the Border Patrol must be released within 72 hours, but in reality they are detained for much longer.

What happens with the children?

It is assumed that minors not accompanied by an adult must be transferred to the Department of Health and Human Services (HHS), which hires several companies and nonprofit organizations to manage the shelters in which the children remain until a social worker finds an appropriate family member or one of their parents in the United States to give them custody.

But the growing number of unaccompanied minors―the number was about 11,500 in May alone―has exhausted HHS resources, so it has not been able to accommodate children as quickly as it used to, the agency said. That means that minors stay weeks in the Border Patrol detention facilities. Since December, five children have died after being stopped by the Border Patrol.

Lawyers who interviewed children at a Border Patrol station in Clint, Texas, described unhealthy conditions, as well as hungry and sick children.

As for families with children, they are usually kept together for several weeks in government facilities and then released into the interior of the country to await a decision on their asylum applications. They are often placed in shelters or with non-governmental organizations in border cities; other times they are taken to bus stations, leaving them to their fate.

Religious groups and other organizations have intervened to help some of them. In Phoenix, for example, aid workers show up at the bus station to help facilitate fares or take migrants to a shelter.

After being released by the government

Many families are released within the United States to live with family or friends. They are required to inform the Immigration and Customs Enforcement (ICE) Service of their whereabouts and their immigration case is transferred to the nearest court.

Families must appear in court on the hearing date that was granted to them. The figures show that most do, but the judicial system has such an accumulation of work that it could be years before their asylum case is resolved.