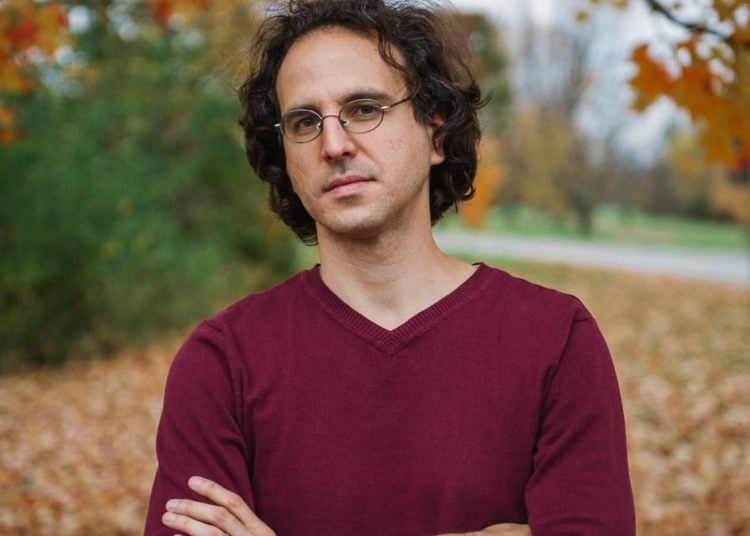 Antonio Llaca was born in Havana in 1984. At the age of 12 his parents took him to Venezuela for work reasons. Leaving the island was not easy. Leaving behind his friends and the rest of the family was the worst part.

In Cuba he did not study music. His first music lessons were in El Tigre, a small Venezuelan city where he studied classical guitar, the Venezuelan cuatro and the mandolin. And when he reached the university stage he moved to Caracas to study in the University Institute of Musical Studies (IUDEM) with Venezuelan professor Luis Zea.

A year later he emigrated to Canada where he began studying classical music, first guitar and later choral direction in the city of Ottawa. After graduating he continued advanced studies in Montreal in choral direction for a master’s.

Today he has a very active musical career, he directs eight ensembles, between instrumental and choral, and he teaches music in Carleton, one of Ottawa’s biggest universities. Last July he went on a tour of Beijing and Shenyang for the International Choir Festival. In China he presented two Cuban choral works by maestro Frank Fernández. Because Cuban music has always been part of his life.

“Cuba continues being an important part of my life. I’ve always been close to my culture and my identity as a Cuban. Returning to Havana means coming home. I love to walk the streets of my city, talk to the people in my language, taste the environment and of course reconnect with my family,” Llaca commented to OnCuba.

Posted by Antonio Llaca – Choral Conductor on Thursday, May 24, 2018

How was your arrival in Canada?

Like any change, it was very difficult, but I was lucky to have a family that received me and helped me a great deal during the first months of adaptation. Although the culture is rather different from ours, the Canadians are very hospitable and receivers of new cultures, thus in that sense it wasn’t that difficult for me.

I believe that one the biggest obstacles were the languages, since here there are two official languages, and I studied both. But beyond that, I came to study and to get a university career here, then of course my English had to be rather good to be able to enter the university. The first years were the most difficult, and the climate was the biggest challenge to adapt to this country.

How did you start your studies in Canada?

It was relatively simple, after going to the language courses I validated my university studies from Venezuela and I auditioned in Ottawa’s three university institutes. Out of the three I chose to enter the University of Ottawa, an institution which offered me grants during my BA studies. There I continued studying classical guitar and I started studying choral direction, I took a course and I liked it, my professor at that time encouraged me to continue studies in that area and that’s how I increasingly started working with choirs. After finishing my BA, I started a Master’s in Montreal under American director Robert Ingari.

What is Antonio Llaca doing now?

Well, now a teach direction of choral and instrumental ensembles, as well as History of Opera in Carleton University. I have a great many students and teaching is something for which I have a great deal of passion.

In Quebec’s Music and Dramatic Art Conservatory I teach in French, I work as the director of large ensembles, and I direct the grand choir, the chamber choir, the orchestra and the children’s choirs. In addition to this, I work as artistic director of the Ottawa Live Choir and I direct the children’s choir of the Chinese community in that same city.

On June 6th I had the pleasure of conducting a group of Coro Vivo Ottawa singers during the AOE Arts Council | Conseil des arts AOE AGM. Here's a short excerpt of that performance. We sang a beautiful arrangement of Yesterday by Bob Chilcott

Cuban music has always been present in your personal and professional life, why have you continued incorporating it to your programs?

I feel very close to my culture and I try to share as much as I can with my audiences. Ever since I started my artistic work here I have tried to incorporate Cuban music to my programs, thus I have presented from major works of the classical repertoire to vocal arrangements of Cuban popular music. In addition to Cuban music I have incorporated to my programs a great deal of Latin American repertoire, which in general is not very well-known here.

I love producing new works and being able to make known the cultural wealth of our region. There are many talented composers in our country and I believe that their works deserve to be known beyond our borders. For example, in 2013 I presented José María Vitier’s Misa cubana: A la Virgen de la Caridad del Cobre for choir, orchestra and soloists. I have also produced works of the Latin American and Cuban baroque for orchestra and choirs, among them Esteban Salas’ Misa en Sol menor, and some of his carols for Christmas concerts. I have presented with my chamber choir several coral arrangements of pieces by Cuban authors like El Bodeguero by Richard Egües and Retorna by Sindo Garay.

I love to explore the Cuban musical scene. It is very gratifying to be in contact with the musical movement in Cuba. That gives me energy and new ideas to program repertoires and works from our country.

What is the reaction of your students and the public to those programs of the Cuban repertoire?

The programs are always very well received because the Canadian public likes to discover new works. I believe that some of the most interesting reactions have precisely been with classical music works, since the Cuban (or Latin American in general) baroque repertoire is not precisely very well-known in Canada and it always causes great interest among the public to discover, for example, Esteban Salas’ pieces.

My students always receive that Caribbean repertoire with great interest, be it a major work or a small a capella choral arrangement. There is a great deal in our music that is intriguing and interesting for a music student, be it harmonization or of course the rhythmic wealth of Cuban music.

You recently performed in China, how was the experience?

The experience was wonderful. We formed part of the Beijing International Choral Festival, where I gave a workshop about the direction of choirs and we gave concerts in Beijing and Shenyang, some of them only our choir, and in others we shared the stage with choirs from other parts of the world like Russia and Spain.

It was a unique experience, we spent days surrounded by choir members from many parts of the world and we had the opportunity of exchanging experiences with many of them. Our hosts were extremely welcoming and in addition the public received well the programs we presented. It was a major event and a reminder that music is a universal language, something that joins us independently of the language we speak or of the continent where we live.

Would you like to carry out an exchange between Cuban and Canadian musicians and/or students?

Yes, I would love that. I believe that the intercultural meetings of that type are very beneficial. Some years ago I gave some concerts in Havana with one of my choirs from here and I would love to repeat them with one of my student groups. It was a very welcoming and positive experience, because in addition in Cuba we have very interesting concert halls for choral music.

You are very abreast of artistic teaching in Cuba, what do you think of the musical formation in the art schools?

I believe the teaching regimen is good, and it allows the young musicians to technically develop. Moreover, there is a good cultural scene that favors the growth of those talents, particularly in Havana. There are several ensembles especially in the music schools and the conservatory that demonstrate that the teaching is technically good. However, I believe there are possibilities to open up to a more varied repertoire and to incorporate new international compositions in the programming of those ensembles.

Do you consider there is a good representation of young musicians with classical repertoires in Cuba?

I believe there are many talented musicians and classical groups that in some cases mark the guideline and become referents of particular musical genres. Unfortunately, our major symphony and choral works are not very well-known outside the national territory. Even though there are many Cuban ensembles promoting our music throughout the world, I believe that it could be more far-reaching. We have a vast musical wealth and it transcends popular music, that’s why I feel that it is my task to make known our musical wealth outside the island’s borders through the choral works.

What do you miss the most about Cuba?

Beyond the family and culture, what I believe would be obvious to say is the beaches. It is something that I certainly can’t find here.

ALOCUBANO: The Cuba My Eyes See