The measure provides for the inoculation with Cuban drugs, and in a “gradual manner,” of medical students, health and pharmaceutical industry workers, as well as population groups from selected territories at risk of contagion with COVID-19. 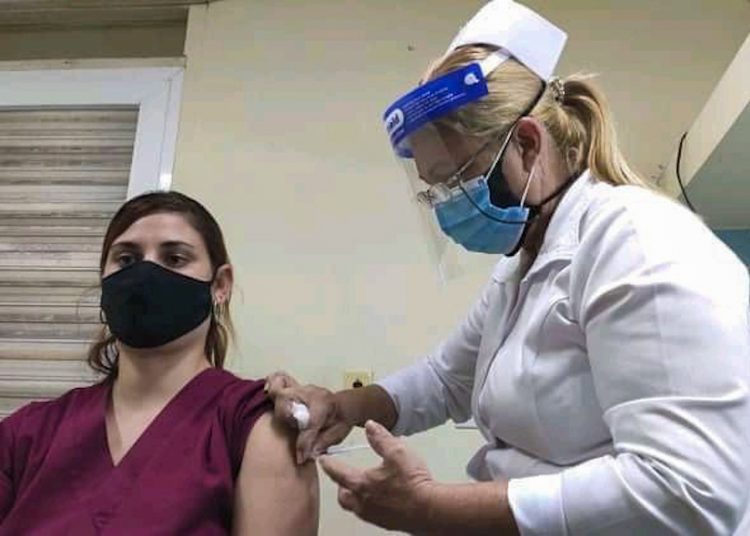 Around 70,000 Cubans have already received the first dose of the Abdala vaccine candidate, just two days after the start of a health intervention launched throughout the island by the Cuban Ministry of Public Health (MINSAP).

The measure provides for the inoculation with Cuban drugs, and in a “gradual manner,” of medical students, health and pharmaceutical industry workers, as well as population groups from selected territories at risk of contagion with COVID-19, according to information from the MINSAP cited by the state media.

This Wednesday the intervention began in the Havana municipalities of Regla, Guanabacoa, Habana del Este and San Miguel del Padrón, where nearly 400,000 people over 19 will receive the COVID-19 shot. The applied strategy prioritizes at first those over 60 years of age, to later be extended to the rest of the age groups.

According to the source, in the coming weeks the municipalities of Arroyo Naranjo, Boyeros and Cotorro, in which it is expected that close to 383,000 residents will be vaccinated, will join the vaccination campaign with the Abdala candidate, developed by the Center for Genetic Engineering and Biotechnology (CIGB).

For its part, in a second stage of the health intervention in the Cuban capital, scheduled to begin in the second half of June, the first doses of the Sovereign 02 candidate—developed by the Finlay Vaccine Institute—will be applied to the volunteers of the municipalities of Plaza, Playa, Centro Habana, Old Havana, Cerro, Diez de Octubre, La Lisa and Marianao.

The Cuban health authorities hope that 1.7 million inhabitants of the capital city will be inoculated with one of the two Cuban vaccine candidates, currently in Phase III of clinical trials and awaiting data on its efficacy against the virus. Meanwhile, in Santiago de Cuba, Matanzas, Pinar del Río and the special municipality of Isla de la Juventud, health personnel and clinical sites are already preparing for vaccination.

According to the Agencia Cubana de Noticias news agency, as of Friday, some 5,900 workers from the tourism sector will join the health intervention in Varadero, Cuba’s main sun-and-beach destination. The provincial director of Public Health in Matanzas, Ailuj Casanova, added that in that province the Abdala candidate will be applied to the population between 19 and 49 years of age, in more than 600 vaccination sites enabled for the process.

Minister of Public Health José Ángel Portal recently explained that the health intervention is covered by the 1983 Public Health Law, which in its Article 64 empowers the Ministry of Public Health to “dictate sanitary and anti-epidemic measures in the face of situations caused by natural or other disasters that imply serious and immediate threats to health.”

The minister argued that all the processes already underway were approved by the Center for State Control of Medicines, Equipment and Medical Devices (CECMED). To do this, a “favorable benefit-risk ratio” was taken into account given the current complex epidemiological situation in Cuba, where there is a high transmission of the coronavirus and an increase in seriously ill and deceased patients.

The health authorities hope to have 70% of the Cuban population vaccinated against COVID-19 in August, and to reach the rest before the end of the year. If this is achieved, the island could become the first country to immunize as many inhabitants as possible with its own vaccines.