The head of the National Department of Primary Health Care of the MINSAP, María Elena Soto, explained that the vaccination was designed by population strata and will begin with people 60 years of age and over.

OnCuba Staff
in Health in Cuba, Science in Cuba
0 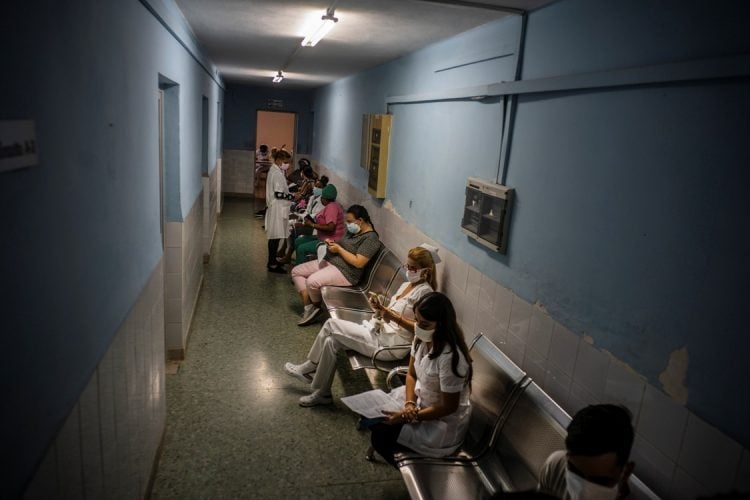 Health workers wait to receive the first dose of the Soberana 02 COVID-19 vaccine candidate, as part of an intervention study with Cuban health personnel, at the Vedado Teaching Polyclinic, in Havana. Photo: Ramón Espinosa/AP/POOL.

The Cuban Ministry of Public Health (MINSAP) announced this Thursday that the massive intervention with the Abdala and Soberana 02 COVID-19 vaccine candidates will begin in the coming month of May, with the participation of 1.7 million volunteers from Havana.

The head of the National Department of Primary Health Care of the MINSAP, María Elena Soto, explained that the vaccination was designed by population strata and will begin with people 60 years of age and over, according to the Agencia Cubana de Noticias news agency.

In an appearance on Cuban television, the specialist explained that this age group was prioritized due to the high risks they run in the event of being infected with COVID-19, as they present a greater number of comorbidities, “which is demonstrated in the number of cases and deaths.”

Soto pointed out that those over 60 years of age will be followed by the population group aged from 40 to 59 years old and later by people between 19 and 39 years old.

Likewise, she clarified that pregnant, postpartum and breastfeeding women will not receive COVID-19 injectable vaccines on this occasion, and warned that convalescents from COVID-19 and decompensated patients from diseases such as Hypertension, Diabetes Mellitus and Heart Disease, will also be excluded from the study.

Cited by the agency, the doctor confirmed that they have lots of Cuban vaccine candidates that do not contain Thimerosal, intended for people allergic to that compound.

The MINSAP official assured that the human and technical resources are prepared for the massive intervention in the Cuban capital, and added that the doctor’s offices and premises that will serve as vaccination centers have already been selected, in addition to other post-vaccination observation rooms, where patients they will remain one hour after being vaccinated.

During her appearance, Soto warned that “the vaccine is not magical, it has a process and all the doses must be received to achieve complete immunization.”

Although the Cuban health authorities have declared that the drugs Soberana 02 and Abdala are safe, so far the island has not published updated data on the efficacy of these vaccine candidates, which are currently in phase III of clinical trials.

In addition, with both candidates, population interventions are already being carried out in Havana and the eastern part of the country, aimed at immunizing health workers and the biotechnology and pharmaceutical sector, among other selected high-risk groups.

Cuba is currently going through its worst moment of the pandemic, with an increase in the number of cases and deaths from the disease in recent weeks. This Wednesday, the MINSAP reported 12 deaths and 1,207 new infections, a figure that represents a negative record for the island, which is already close to registering 100,000 diagnosed positive cases.