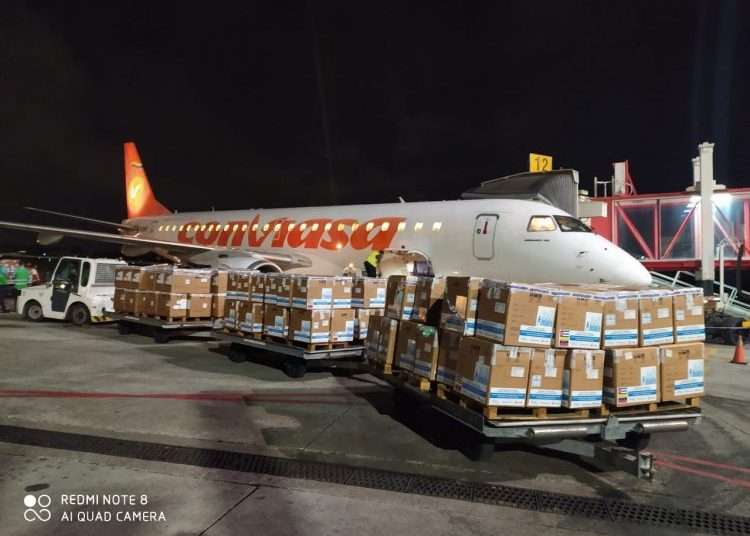 Cuba sent over 1.5 million doses of Abdala to Venezuela. Photo: Taken from the CIGB Twitter.

Cuba sent a new shipment of more than 1,590,000 COVID-19 vaccines to Venezuela on Friday, bringing the doses the island has provided to Caracas to immunize its population to almost seven million.

The Center for Genetic Engineering and Biotechnology (CIGB), a Cuban institution dedicated to the production and commercialization of biotechnological and pharmaceutical products, reported on Twitter that 1.5 million doses of the Abdala formula left Cuba for Venezuela.

The president of that South American country, Nicolás Maduro, affirmed that by the end of the year they would receive around 16 million doses of the Cuban Abdala vaccine, used on the island together with Soberana 02 and Soberana Plus.

On October 3, Venezuela received a first batch of 900,000 doses of Abdala, authorized last July for use in emergencies by the Cuban Center for State Control of Medicines (CECMED).

On that occasion, Delcy Rodríguez, executive vice president of that nation, thanked Cuba for incorporating the drug into the immunization process in Venezuela, and announced the signing of a contract for 12 million doses.

Abdala, the first COVID-19 vaccine developed in Latin America, is a subunit formula based on the receptor-binding domain (RBD) of the virus’s protein S — the type of platform in which Cuban scientists have the most experience — and has an intramuscular administration scheme of three shots in 28 days.

Clinical trials of this vaccine, created by Cuban scientific institutions, showed an efficacy of 92.2%. Venezuela is, along with Iran, Vietnam and Nicaragua, one of the countries that have received Cuban-made vaccines.

Cuba it not a member the Covax mechanism, created by the World Health Organization so that low- and middle-income countries have access to vaccines, nor did it buy them on the international market to immunize its population.