In addition, Cuban health authorities announced that they are considering conducting a clinical trial in children under 2 years of age as part of the mass immunization process against COVID-19. 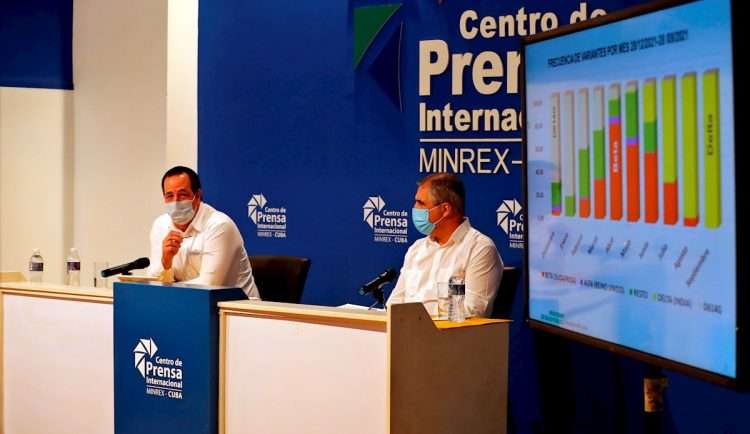 Cuban Public Health Minister José Ángel Portal (l) and the president of the BioCubaFarma business group, Eduardo Martínez (r), participate in a press conference in Havana, on October 12, 2021, in which they announced that Cuba plans to apply booster doses of its own COVID-19 vaccines. Photo: Ernesto Mastrascusa/EFE.

Cuban health authorities announced this Tuesday that they will apply booster doses of their own COVID-19 vaccines and are considering conducting a clinical trial with 2-year-old children or below, as part of the mass immunization process.

The president of the BioCubaFarma state business group, Eduardo Martínez, told reporters that antibody levels remain high six months after Cuban vaccines are applied, but some people are more susceptible to re-infection and others are immunosuppressed patients.

The objective is to increase the protection of these people against new variants with a high viral load, explained the director of the group that produces and markets drugs of the biotechnology industry, who added that the effectiveness of Cuban formulas supports the eventual application of extra doses.

That process could begin in November with the Soberana Plus, Soberana 01, Abdala injectable formulas and the Mambisa nasal application, he said.

Regarding the eventual start of clinical trials in children under 2 years of age, he commented that the decision is due to the high safety of Cuban immunogens shown in the different studies in other population groups.

Cuba began vaccinating its pediatric population (ages 2 to 18) with COVID-19 vaccines created in scientific institutions on the island in September, a step prior to resuming the 2020-2021 school year.

In this regard, Cuban Minister of Health José Ángel Portal affirmed that 92% of the total of 1,912,470 belonging to that group have already received a dose to date.

Portal also reported that 86% of Cuba’s 11.2 million inhabitants already have at least one dose, while more than 55% have already completed the immunization scheme.