“Just like the need to be vaccinated, the need to lift sanctions against the Cuban family has to do, not with political preferences, but with human preferences,” the Cuban-American activist and teacher paraphrased a previous message from Biden on vaccination against COVID-19. 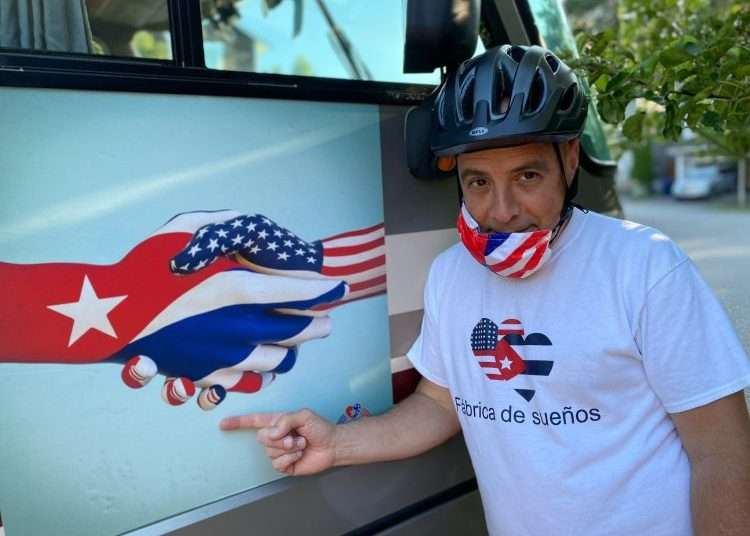 Cuban-American professor and activist Carlos Lazo, leader of the Bridges of Love project, asked U.S. President Joe Biden this Friday to fulfill his campaign promises on the reestablishment of relations with Cuba and lift the economic sanctions that affect Cuban families.

“In the midst of the pandemic that is devastating the world: Could you show at least a tiny bit of humanity for Cuban families and lift the sanctions? Could you fulfill what you promised? “Lazo wrote in a letter that he made public through his social networks.

The activist’s message to Biden took as a starting point a few words from the president about the COVID-19 vaccination in the United States, published on Twitter. In them, the Democratic president pointed out that a “strong majority of Americans support the vaccination requirements,” because they know that this issue is not about politics but rather “it’s about life and death” and the capacity for “looking out for one another.”

In his letter, the teacher assured Biden that he supports his words, but asked him to make these phrases extensive to the current situation of the Cuban people as a result of the embargo and sanctions policy against the island, augmented by the Trump administration and that his government maintains in practice despite its promises and criticisms during the election campaign.

“Wise and beautiful words, Mr. President! Your words are so specific that they come in handy for the issue of Cuban families,” said Lazo, who “speaking of ‘majorities,’” reminded the president that, “on the issue of the embargo, as well as on the issue of vaccination, the majority of Americans also support lifting the blockade against Cuba.”

“Using the same logic that you used on your Twitter,” said Lazo to Biden, “the issue of giving relief to millions of people is connected, more than anything, with our ability as human beings to look out for one another. Therefore, sir, I make my own your words that ‘it’s about life or death’ (let me add) for the Cuban people.”

“In short, Mr. President, we support your words of humanity and compassion, but…could you make those words extensive to the Cuban people?” the leader of Bridges of Love reiterated.

“Mr. Biden, Cubans are human beings too (although they seem to have forgotten that in the White House). God bless you and your family, President Biden!” concluded the teacher, who has been the target of criticism and even attacks and threats from radical sectors due to his position on the subject.

Lazo, who has already sent other letters to Biden and Trump advocating for the lifting of sanctions and the improvement of bilateral relations, invited others to “write to the President of the United States (in English or Spanish)” or to copy and send his letter as a way to continue pressuring the U.S. government to change its policy towards the island.