The announcement was made by the island’s prime minister, Manuel Marrero, during a television appearance, in which he also ratified the authorities’ projection to vaccinate the Cuban population over 19 years of age before the end of 2021. 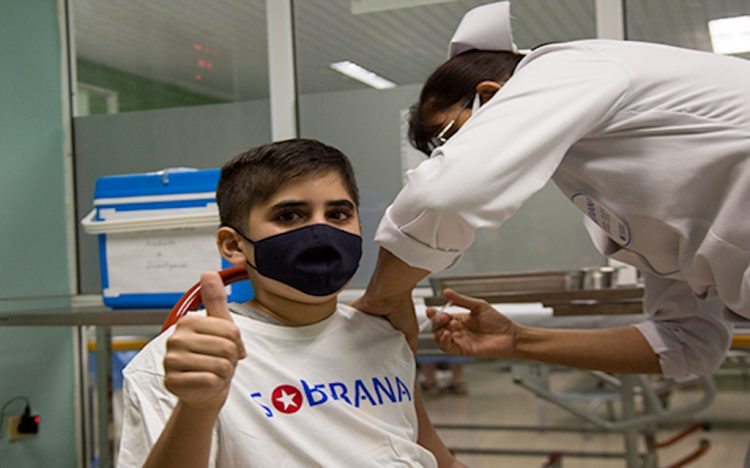 The Cuban government announced this Wednesday that starting September it will immunize the population between 3 and 18 years of age against COVID-19, with two of the five vaccines developed by scientific institutions on the island to face the pandemic.

The announcement was made by the island’s prime minister, Manuel Marrero, during a television appearance, in which he also ratified the authorities’ projection to vaccinate the Cuban population over 19 years of age before the end of 2021.

At this time, two pediatric trials are being carried out in Cuba, one of them with Abdala, the first Latin American coronavirus vaccine, which was designed by the Center for Genetic Engineering and Biotechnology (CIGB).

Abdala showed an efficacy of 92.2% in clinical trials and has the authorization for emergency use from the Center for State Control of Medicines, Equipment and Medical Devices (CECMED), the Cuban regulatory authority.

This trial with three doses of this vaccine will include 592 children and teenage volunteers between the ages of 3 and 18 years — in two phases, first teenagers up to 12 years and then children — residing in urban areas of the Camagüey municipality in the Cuban province of the same name.

Soberana 02, the other potential Cuban COVID-19 vaccine (Finlay Vaccine Institute-IFV), is currently being tested in a pediatric trial called Soberana-Pediatría, which began the application of the second dose of this vaccine candidate in a group of 25 teenagers from 12 to 18 years of age.

The combination of two doses of Soberana 02 with a booster dose of Soberana Plus has shown in preliminary analyzes an efficacy of 91.2% to face the SARS-CoV-2 coronavirus, which causes COVID-19, according to the IFV.

This Wednesday Marrero indicated that almost 60% of the Cuban population will be fully vaccinated by the end of next August and 80% will have at least one dose of their vaccines inoculated by then.

He also assured that there is no difficulty for the entire population of Havana over 19 years of age to be fully immunized with the three COVID-19 vaccine doses in July.

The World Health Organization (WHO) establishes that for a candidate to be considered a vaccine, they must demonstrate an efficacy equal to or greater than 50%.

At least one dose of Abdala and Soberana 02 has already been administered to more than three million Cubans, according to official statistics, as part of health intervention studies and in parallel with clinical trials.

Cuba is not part of the WHO Covax mechanism created for low- and middle-income countries to access vaccines, nor has it purchased them on the international market.