The deputy director of the Development and Production of Diagnostic Kits area, Irina Valdivia, stated that the test, registered by the Center for the State Control of Medicines, Equipment and Medical Devices, identifies the presence of the virus in asymptomatic suspected patients in just four hours. 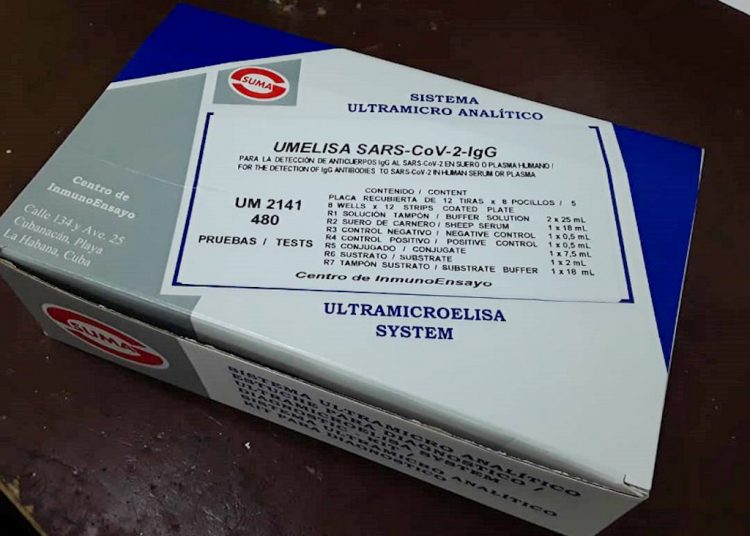 The first batch of a completely Cuban-made antigen test, UMELISA SARS-CoV-2, will soon be delivered to the Medicines Marketing and Distribution Company, for its incorporation into the health and coronavirus detection protocols on the island.

The deputy director of the Development and Production of Diagnostic Kits area, Irina Valdivia, stated that the test, registered by the Center for the State Control of Medicines, Equipment and Medical Devices, identifies the presence of the virus in asymptomatic suspected patients in just four hours, reported the official newspaper Granma.

The biotechnological product, created by the Immunoassay Center (CIE), and validated by the Pedro Kourí Institute of Tropical Medicine, is a test manufactured entirely on the island, both the kit and the raw materials that were used for its development and production, said the specialist.

Cuban President Miguel Díaz-Canel highlighted on Twitter the production of the test as “another achievement of Cuban science,” as well as the fact that it is “100% Cuban.”

According to Valdivia, the first 644 UMELISA kits are already in the cold room, the last stage to which they are subjected before delivery. In addition, manufacturers are already advancing the production of the next two batches agreed for this month.

Valdivia assured that 826 kits should be delivered on July 8, and by next July 15, more than 1,600, with which the Cuban health system will be able to count on more than 705,000 diagnostic tests.

In an interview with Granma last year, the general director of the Immunoassay Center, Niurka Carlos Pía, explained that UMELISA is a system “capable of detecting IgG-type antibodies in serum or plasma samples, and for this it uses synthetic peptides of immunodominant regions of the virus.” In other words, it uses segments of the virus proteins on which the infected person’s immune response develops, which were synthesized by CIE researchers, with the collaboration of the Ministry of Public Health and the Center for Genetic Engineering and Biotechnology (CIGB).

“The system has the advantage of being able to be applied in massive investigations of the disease, together with the results of other laboratory tests, in addition to being able to undertake epidemiological studies aimed at knowing the degree of exposure to the virus that a certain population group has had,” Carlos Pias added at the time.

Cuba is experiencing its worst moment of the pandemic, with more than 3,000 positive cases a day in recent days. This Monday, the island’s health authorities reported 21 deaths from COVID-19, the highest number to date, while the active cases stood at 19 113 on that day and there were 211 patients in ICUs due to the disease: 80 in critical condition and 131 in serious condition.