The study will involve the participation of 1.6 million volunteers in the Cuban capital, over 18 years of age, who will receive the necessary doses of the Soberana 02 and Abdala vaccine candidates. 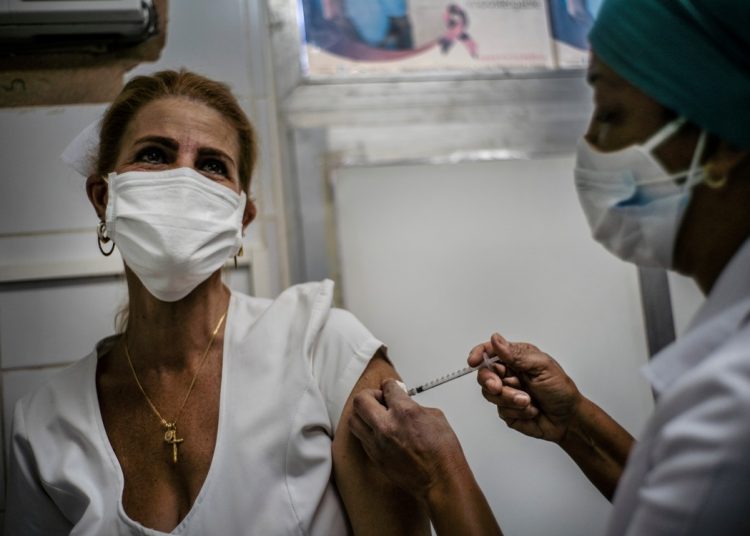 A nurse injects another nurse with a dose of the Soberana 02 COVID-19 vaccine candidate, as part of an intervention study with Cuban health personnel, at the Vedado Teaching Polyclinic, in Havana. Photo: Ramón Espinosa/AP/POOL.

An intervention with the Cuban Soberana 02 and Abdala COVID-19 vaccine candidates on a large population scale will begin at the end of this April, with the participation of 1.6 million volunteers from Havana, reported the Agencia Cubana de Noticias news agency.

The study will include the seven municipalities of the Cuban capital not included in phase III clinical trial, where 812,600 volunteers, over 18 years of age, must be recruited to receive the necessary doses of one of these two drugs developed on the island against the coronavirus.

Another 842,300 volunteers will be vaccinated in the eight Havana municipalities where phase III of the study is currently being carried out with the Soberana 02vaccine candidate, which this Monday began the administration of the second dose, according to Alma Mater magazine in its social networks, citing a report from Radio Rebelde.

The deputy director general of health in Havana, Dr. Nilda Roca, said that premises near doctor’s offices will be set up to observe those injected up to an hour afterward.

She pointed out the plan is to administer the drug to an average of 100 people each day per doctor’s office, and that a doctor and a nurse must remain at the observation sites.

The training of health personnel who will be involved in the intervention study began this Monday in the municipalities of Guanabacoa and Regla.

For his part, the director of science and innovation of the Cuban Biotechnology and Pharmaceutical Industries Conglomerate (BioCubafarma), Dr. Rolando Pérez, said Cuba could begin in the near future a trial with Soberana 01 and Soberana 02 in the pediatric population, between five and 18 years old.

Cited by the ACN, the specialist explained that this clinical trial will include teenagers between 12 and 18 years old in the first stage, and then a group of minors between 5 and 11 years old.

After completing the first stage of phase III of clinical trials with Soberana 02 and Abdala, the application of the second dose began this Monday in volunteers in Havana, Santiago de Cuba, Granma and Guantánamo, according to BioCubaFarma.

Cuba has five COVID-19 vaccine candidates and, in addition to Soberana 02, the Abdala candidate, developed by the Center for Genetic Engineering and Biotechnology (CIGB), is also in the third phase of studies, while controlled interventions are being developed in groups selected by the authorities, such as health workers, scientists and athletes.

The island’s government hopes to conclude this year with the entire Cuban population immunized against the disease caused by the SARS-CoV-2 virus.