The start of the trials in Iran began with an official ceremony at the University of Medical Sciences of the city of Isfahan in central Iran, with the presence of Minister of Health Said Namaki and with the vaccination of four volunteers. 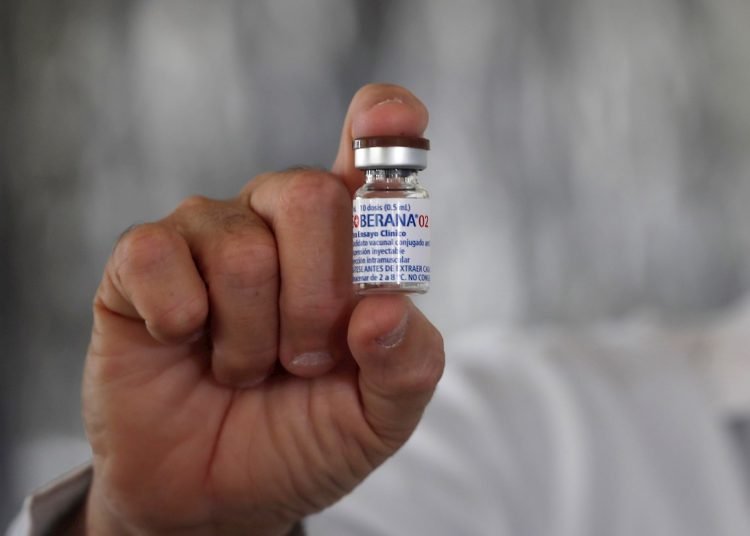 In the image, a sample the Cuban Soberana 02 vaccine, on February 25, 2021, in Havana (Cuba). Photo: Ernesto Mastrascusa/EFE/Archive.

Iran began this Monday the third phase of the clinical trial of the Cuban Soberana 02 vaccine, locally called Pasteur, which will involve 24,000 volunteers from seven provinces in the north, center and south of the country.

The start of the trials in Iran began with an official ceremony at the University of Medical Sciences of the city of Isfahan in central Iran, with the presence of Minister of Health Said Namaki and with the vaccination of four volunteers, reported the local Iranian news agency ISNA.

The director of the Center for Management of Infectious Diseases of the Ministry of Health, Mohamad Mehdi Guya, and the director of the Pasteur Institute of Iran, Alireza Biglarí, were the first two to get their shots.

“Today our country has achieved one of the best, most effective and dynamic coronavirus vaccines in the world at the Pasteur Institute,” Namakí said in a speech at the event.

According to the agreement signed last January between the Finlay Vaccine Institute of (IFV) of Havana and the Pasteur Institute, the third and last phase of tests of Soberana 02 is also being carried out in the Persian country and then the technology is transferred to locally produce the drug.

This candidate began the final stage of clinical trials in Havana on March 8 with 44,010 volunteers, and at the end of the month the tests were expanded with a parallel intervention study of another 150,000 people.

For testing in Iran, some 100,000 doses of the vaccine arrived in Tehran in March, which will be tested on volunteers aged between 18 and 80.

Biglarí explained on Iran’s state television that it is expected that “two million doses” of this serum will be produced “monthly,” and that it will be supplied for general vaccination in the country at the beginning of June.

Eight Universities of Medical Sciences of Mazandaran, Babol, Isfahan, Yazd, Kerman, Hormozgan, Zanyan and Hamedan are participating in the trials.

A booster dose will be administered in Yazd and Zanyan, in addition to the two doses of the vaccine, as Biglarí had previously explained to the local news agency ISNA.

According to Biglarí, “the booster dose can be effective in stimulating the immunity of people who have previously been infected with COVID-19.”

Iran, which is currently going through the fourth wave of the pandemic with daily maximum infections, is developing several vaccine preparations at the local level and this Sunday began the third phase of clinical trials of its most advanced local COVID-19 vaccine called COVIRAN Barekat.

The total death toll in the country is about 70,000 people and the number of those infected is approximately 2.4 million.