Although he did not give details about the specific activities he was referring to, Bruno Rodríguez said on Twitter that these actions “constitute an interference in the internal affairs of the country and seek to undermine our constitutional order.” 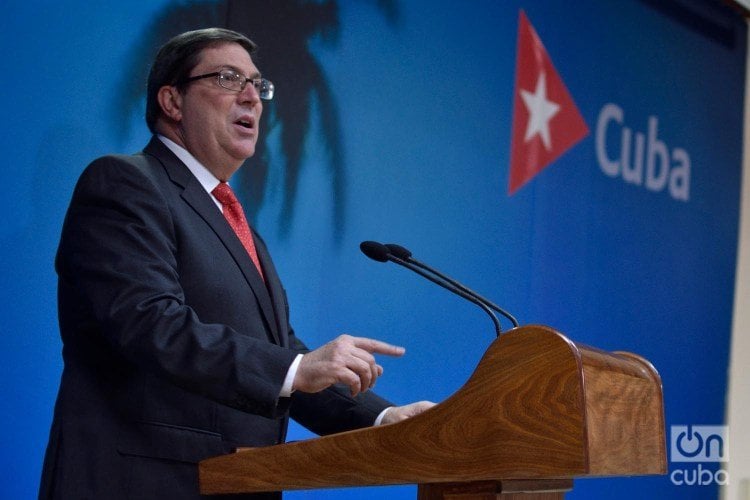 Cuban Foreign Minister Bruno Rodríguez gives statements to the press about the impact of the U.S. embargo/blockade on Cuba, at the headquarters of the Foreign Ministry in Havana, on September 20, 2019. Photo: Otmaro Rodríguez.

Cuban Foreign Minister Bruno Rodríguez denounced this Tuesday “illegal actions” of the U.S. Embassy on the island, although without specifying which activities in particular he was referring to.

In a message posted on his Twitter account, Rodríguez said that these actions “constitute an interference in the internal affairs of the country and seek to undermine our constitutional order.” In addition, he added that they “violate the Vienna Convention, the agreement on the restoration of relations and Cuban and U.S. laws.”

In a previous tweet, the foreign minister had criticized Secretary of State Mike Pompeo for urging his Embassy in Havana “to intervene in the internal affairs of a sovereign country that will not allow it.”

In that same message, he said that Pompeo “applauds coups d’état and turns a blind eye to murders, acts of barbarism, repression and human rights violations by his allies,” in a presumed allusion to Washington’s support for the recent repression of popular demonstrations by several Latin American governments, including the interim government of Bolivia, which Cuba considers the result of a coup d’état.

Days ago, the Cuban government accused the U.S. diplomatic mission on the island, and particularly its Chargé d’Affaires Mara Tekach, of concentrating on the “failed purpose of recruiting mercenaries, of promoting division and confusion among our people,” as well as “identifying areas of the economy against which to direct coercive measures, and trying to slander and discredit the work of the Cuban government and the Revolution,” according to a press release published in the newspaper Granma.

The statement came to light as a result of the relevance reached in the media and social media of the case of José Daniel Ferrer, a leading member of a group that opposes the Cuban government and who is detained, according to the official version, on suspicion of kidnapping and assaulting another man.

The U.S. government and opposition groups reject this version―which they call an “invention”―and have demanded that Havana free Ferrer. But in the opinion of the Cuban government, these pronouncements are part of a “campaign to discredit Cuba.”

“The United States Embassy in Cuba has been the fundamental vehicle of attention, orientation and financing of the behavior of José Daniel Ferrer, in a clear manifestation of interference in the internal affairs of Cuba and of an open instigation to violence,” says the government statement.

The accusations against the chargé d’affaires and the U.S. Embassy constituted a change in Cuba’s normal language with respect to its relations with the United States, which had remained restrained despite the escalation of the Trump administration against the island, with sanctions directed at restricting income and cutting off access to fuel.

After the Cuban statement, Pompeo defended Tekach and the diplomatic mission on the island, which, he said, “remain steadfast as they carry out the President’s mission to defend human rights and advance the cause of democracy in Cuba.”

In the opinion of the Secretary of State, the Cuban government “has launched these baseless allegations in an attempt to distract the international community from its treatment of the Cuban people, especially the ongoing arbitrary detention of dissident Jose Daniel Ferrer.”

Recently, the general director for the U.S. of the Cuban Foreign Ministry, Carlos Fernández de Cossío, had said that the U.S. government has hindered the granting of visas to Cuban diplomats, which “forces Cuba to reciprocate.” He also said that “it is something they are trying to present as an incident” to seek the closure of embassies and break bilateral relations, about which Foreign Minister Rodríguez has warned.

The links between Cuba and the United States are going through a critical moment after the end of the “thaw” promoted by former presidents Barack Obama and Raúl Castro. The arrival of Donald Trump in the White House has meant a return to the policy of sanctions and confrontations, which have increased with the proximity of the 2020 electoral process.