According to the foreign minister, between April 2019 and March 2020 the effects caused by Washington’s policy towards Cuba for the first time exceeded the 5 billion barrier in one year, a figure that still does not include the damages during the COVID-19 pandemic, a period in which, he said, the “genocidal nature” of the U.S. embargo “has been reinforced.” 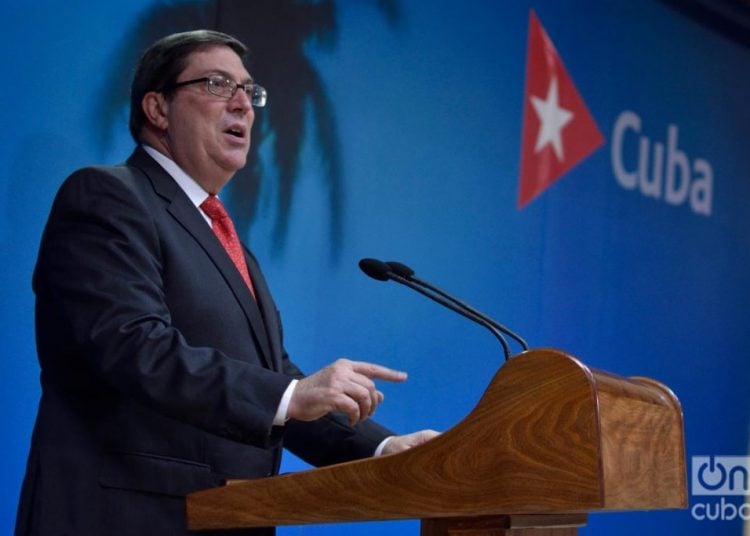 Cuban Foreign Minister Bruno Rodríguez Parrilla affirmed this Thursday that the United States’ economic embargo on the island has reached “unprecedented levels” in recent times and has been reinforced during the COVID-19 pandemic.

“The blockade reaches unprecedented levels and in the last two years it has included actions that classify as unconventional measures, inappropriate for peacetime, and increase our people’s suffering,” said Rodríguez when presenting to the press the annual report on the impact of the U.S. embargo between April 2019 and March 2020.

Among those actions, the Cuban foreign minister cited “the possibility of establishing lawsuits under Title III of the Helms-Burton Act, the increase in the persecution of Cuba’s financial and commercial transactions; the ban on flights from the U.S. to all Cuban provinces, with the exception of Havana; and the persecution and intimidation of companies that send fuel supplies to Cuba.”

According to the foreign minister, in the period of time included in the report, the effects caused by Washington’s policy towards Cuba for the first time exceeded the 5 billion barrier in one year (5.570.3 billion), a figure that, however, does not yet consider the actions of the U.S. government in the context of the pandemic “because they go beyond the end of the period in question.”

Thus, the accumulated damages up to that date since the implementation of the embargo six decades ago amount, at current prices, to 144.413.4 billion dollars; while if the depreciation of the dollar against the value of gold in the international market is taken into account, the losses amount to more than a 98 trillion dollars, according to the Cuban Foreign Ministry.

The “genocidal nature of the blockade,” said Rodríguez, “has been reinforced” during the confrontation with COVID-19, a stage in which, he said, the U.S. government has used the extraterritorial component of its sanctions to “deliberately deprive the people Cuban” of equipment and medical supplies necessary to manage the disease, the availability of which “can make the difference between life and death for patients carrying the virus, as well as for the health personnel who treat them.”

In addition, he said that in recent months Washington has launched “a crusade to try to discredit and obstruct Cuba’s international medical cooperation, spreading slander and going to the extreme of demanding that other countries refrain from requesting it,” despite which about 30 of the island’s brigades had contributed to the fight against the pandemic in 28 countries and three non-autonomous territories.

The embargo and U.S. elections

Answering a question from OnCuba about the possible scenarios of the embargo and bilateral relations after the upcoming elections in the United States, Bruno Rodríguez said that it was difficult to answer because of “the hypothetical element” and he did not advance what Cuba’s possible position could be if President Donald Trump were to be reelected or his Democratic challenger Joe Biden were to win.

However, the foreign minister had previously affirmed that “whoever wins the elections will have to face the tangible reality that the blockade and U.S. policy harm the Cuban people, families, Cubans living abroad, they violate human rights and make communication, travel, visas and family reunification difficult.”

In addition, he had been “convinced that the people of the United States will continue to express their rejection of these practices that are not only cruel, but also violate their rights as American citizens.”

In responding to OnCuba, the foreign minister pointed out that “the blockade policy against Cuba is in violation of international law” and “has implications in the field of human rights,” ideas on which he insisted several times when presenting the report and responding questions from Cuban and foreign media accredited on the island.

“It should be emphasized that the totally extraterritorial nature of the application of the blockade against the interests of third countries is a massive, flagrant and systematic violation of the human rights of our people and a gross violation of international law,” he commented.

“It is cynical now to tell Cubans that the blockade has no real impact,” Rodríguez said at another time during the presentation of the report, which will serve as the basis for the draft resolution that Cuba presents each year to the UN General Assembly to call for the end of the embargo and that has the majority support of the international community, and the rejection of the United States and Israel, which were joined last year by Jair Bolsonaro’s Brazil.

This draft resolution is usually submitted to a vote in the sessions of the world entity that generally take place on this date, but the Cuban government decided to postpone its presentation for May 2021 due to the health situation caused by the pandemic around the planet and, in particular, in New York, seat of the UN General Assembly.