The services provided to American cruise passengers strengthened and created links in a whole network, especially in Old Havana and its surroundings, even though this type of tourism always leaves less money than the hotel stays. 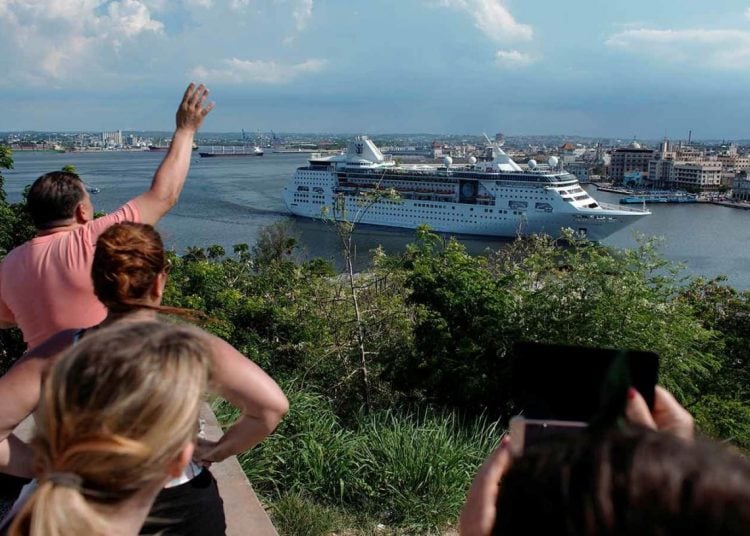 A preliminary look reveals that the suspension of U.S. cruises will have a specific impact on the Cuban economy, but it is far from being the end of the world, although it is taking place at a very complicated time.

According to estimates by John Kavulich, president of the U.S.-Cuba Trade and Economic Council, in 2018 cruise ships contributed between 63 and 107 million dollars to the Cuban government, quite modest figures considering the 2.5 billion in revenue the Ministry of Tourism reported that year. The classic slip-up: “What Cuba earns for cruises is insignificant. The bulk of the money is earned by the cruise company,” said Emilio Morales, president and CEO of Havana Consulting Group.

But undeniably the services provided to American cruise passengers strengthened and created new links in a whole network, especially in Old Havana and its surroundings, even though, in fact, this type of tourism always leaves less money than the hotel stays, especially since visitors spend the night in their large floating hotel, where practically all the services are available to them.

However, several testimonies have been underlining the impact of the measure among Cuban entrepreneurs: “This is another hard blow,” Miguel Ángel Morales, owner of “La Moneda Cubana,” a restaurant in the Historic Center of Havana, told the Los Angeles Times. “About 50% of our business comes from cruises.” “This affects us all,” said William Martínez, 58, who lived in Florida for 46 years but returned five years ago and today makes his living driving a vintage convertible for tourists.

This is another contradiction. Things such as not granting private workers five-year multiple-entry visas, therefore preventing them from buying goods and having horizontal links with their counterparts in Key West, as well as suspending the cruises, can hardly be considered steps to help them become independent from the government. Meanwhile, in the message of those entrepreneurs, among which there are many Cuban millennials, there is little empathy with the changes.

Last May, Cuba Educational Travel surveyed more than 200 members of that private sector to find out about their relationship with U.S. travelers and how the possible restrictive measures could affect them. These are, basically, the results of the survey:

97% say that American travel generates more profits for their businesses. 96% say that decreasing American travel would hurt their business. To help the Cuban private sector, 99% of respondents reflected that the U.S. government should help increase Americans’ travel to Cuba. Of the more than 200 respondents, none said that limiting travel would help the private sector in Cuba. 69% of respondents are “very worried” about the imminent changes in Americans’ travel to Cuba, 28.6% are “worried.” Half of the respondents support more than five members of their family with their earnings.

On the other hand, the reactions to the move did not wait. Cubadebate published a text full of commonplaces and presumptions assuring that the current administration had achieved “one of the enemy’s old ambitions of improving relations between Havana and Washington: cutting the flow of people between the two countries.”

Two days later, in its edition of June 7, Miami’s Channel 23 newscast said the same, but from another angle: “Although flights continue to land at Cuban airports, all passengers on board will have to have family links on the island, otherwise they won’t be able to travel on direct flights.”

A Cuban academician resident on the island then wrote on Facebook, taking a position against the current lack of information:

In the time of Robert Kennedy and until 1977, the American passport had engraved inside: “This passport is not valid to visit North Korea, Cuba, North Vietnam….” They could go to the USSR, Eastern Europe, Albania. This morning I taught a group of students from the New School. Barring new restrictions, they will be able to return next year. The same goes for academicians, participants in international conferences held in Havana, journalists, ecclesiastics, congresspersons and federal and state politicians, scientists who collaborate with Cuban institutions, athletes, students enrolled in courses here, musicians, artists, commercial airlines, etc., etc. Only the people-to-people groups won’t be able to come.

Cubadebate and Channel 23, only taken as samples, overlooked that the official note spoke of “restrictions on non-family travel to Cuba,” not eliminating or eradicating them. And that in the Department of the Treasury regulation of June 4 (“Treasury and Commerce Implement Changes to Cuba Sanctions Rules”) there was a link referring to the categories through which Americans will be able to continue traveling to Cuba, a line that several travel agencies logically emphasized from the first day. “There are still several ways to legally visit Cuba,” said one of them.

And another: “It is perfectly legal for Americans to travel to Cuba with their passports, despite the announcement of the Trump administration in June 2019 that Cuba travel regulations would change.” In short, the move did not annul travel to Cuba and left a rather wide margin for academic, student, religious, humanitarian trips… Travel for family reasons, on the other hand, were not touched.

What’s interesting is that the axing occurs contrary to centripetal tendencies within the Cuban Miami. Indeed, the last survey of the Cuban Research Center (CRI) of Florida International University (FIU, December 2018) showed, for example, that 57% of the respondents favored unrestricted travel to Cuba for all Americans:

When asked if unrestricted travel to Cuba by all Americans should be allowed or not, 57% of respondents answered affirmatively. Support for unrestricted travel is weakest among the prior to 1980 group (37%) and stronger among the after 1995 group (68%) and those who were not born on the island (69%). Most of the respondents in all age groups support the travel opening, except for the group aged 76 or more (49%). The majority (55%) of registered voters support this type of political initiative.

Also that the majority (68%) supported maintaining or expanding trade relations between Cuba and U.S. companies:

Newcomers do so in an overwhelmingly greater number than those who arrived before 1980 (60% of the former want an expansion of economic relations), while only 25% of the latter and the younger respondents are more understanding than older people. Approximately 66% of registered voters support maintaining or expanding economic relations and an impressive 80% of unregistered voters do the same.

Mario Díaz, a 19-year-old Cuban who works as a DJ in a nightclub and saw with his own eyes how the last cruise ship left the port of Havana, surely knows nothing of this survey. But, even so, he was in the same frequency of many people across the Strait when he told the press: “This is all very sad, really, because Obama came here to Cuba and everything, that 2016 was something historic…, and to now see that overnight everything is going back to before….”