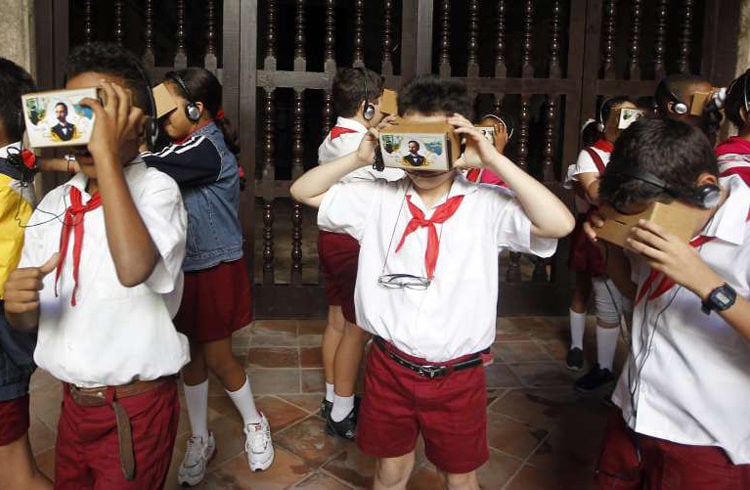 The giant information technology company Google premiered in Havana a documentary about the life of José Martí, Cuba’s National Hero.

Nuestro Martí (Our Martí) is the title of the audiovisual presentation narrated by Historian Eusebio Leal and produced to be seen in 360 degrees with a 3D virtual reality technology.

The documentary was presented in Old Havana’s San Francisco de Asís Convent and is already available to the public on the Google Arts & Culture digital platform.

Its making forms part of a strategy of the Office of the City of Havana Historian, the Bronx Museum and the Ford Foundation to transfer to Cuba a replica of the statue of Martí located in New York’s Central Park. This work was created by U.S. artist Ann Hyatt Huntington and it represents the fall in battle of the Cuban hero in the zone of Dos Ríos, in the eastern part of the island.

Brett Perlmutter, Google Operations director in Cuba, commented during the presentation of the short the pride that carrying out its first event on the island represents for his company, after the recent signing of agreements with the Office of the City of Havana Historian.

Perlmutter confirmed that the documentary will be premiered in New York next January 28 on the 164th anniversary of José Martí’s birth.

In addition, he highlighted the inclusion in Google’s cultural platform of literary archives, paintings and drawings inspired by the work of Martí, as well as works by important artists like Wifredo Lam or René Portocarrero, as part of an initiative that seeks to bring Cuban culture closer to the world.

Eusebio Leal thanked the company for the project. “We are proud that one of the entities of modernity like Google has set its sights on Havana, on the work of Martí and on the city where he was born,” he pointed out.

Leal also said that with Google’s contribution a window was opened to the world “through which our imagination and that of other countries can circulate.” In his opinion, this collaboration between both institutions has established “a bridge that no one can blow up and a door that no one can shut.”

The Havana historian commented that choosing the Basilica of San Francisco de Asís for the short’s presentation followed historic reasons. George Washington was in that site in 1762 when the British troops to which he belonged achieved Havana’s surrender.

The necessary technology to view Nuestro Martí is called Google Cardboard, a virtual reality platform developed based on folding cardboard in which an intelligent cellphone with Android or IOS is set up. Its use makes it possible to use the Android VR applications to watch amazing videos.

Thanks to that tool, those who watch the documentary can travel, through virtual reality, to places in Havana, Tampa and New York visited by the so-called apostle of the island’s independence, while listening to Leal’s voice narrating episodes of the Cuban hero.

In recent years Google has displayed a growing interest in positioning itself in Cuba. Since 2014 it has placed at the disposal of users on the island products like Google Chrome, Google Play and Google Analytics, as well as access to Chrome Web Store that allows the installation of extensions, themes and applications free of charge.

It opened its first technological center in Havana in March 2016 in the studio of visual artist Alexis Leyva Machado (Kcho) and before the end of the year it signed an agreement with the Cuban ETECSA telecommunications enterprise which allows Cuban netsurfers to decrease the time for accessing the search contents thanks to the use of Google Global Cache.