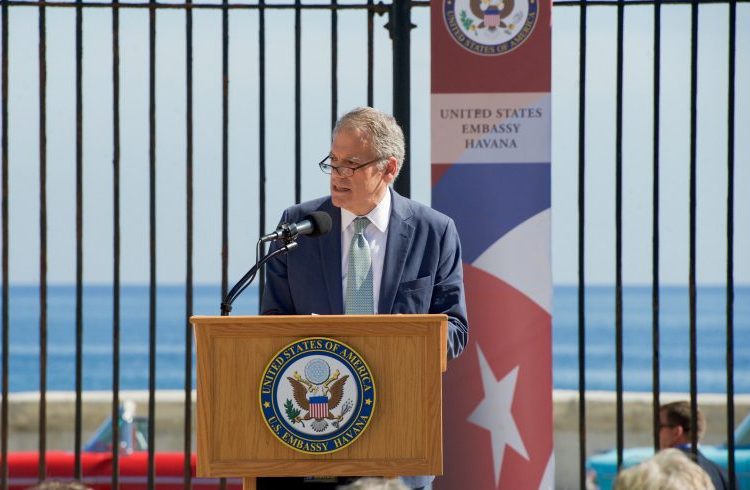 DeLaurentis, one of the diplomats who headed the opening of the U.S. embassy in Cuba, was replaced. Photo taken from the Council of Hemispheric Affairs.

Jeffrey DeLaurentis, one of the diplomats who headed the opening of the U.S. embassy in Cuba, has been replaced with Scott Hamilton, who will carry out the post of ad interim chargé d’affaires in Havana.

The replaced diplomat was the head of the Interests Section in the Cuban capital and was going to be the first U.S. ambassador on the island after the reestablishment of diplomatic relations between both nations. He was named as such by former President Barack Obama in September 2016, but his appointment was blocked in the Senate by Republican Marco Rubio.

“Today I am proud to appoint Jeffrey DeLaurentis to be the first U.S. ambassador in Cuba in more than 50 years. Jeff’s leadership has been vital throughout the normalization of relations between the United States and Cuba, and the appointment of an ambassador is a common-sense step forward toward a more normal and productive relationship between our two countries,” President Obama said on that occasion.

DeLaurentis had extensive experience on the island, because previously, since the 1990s, he had had several missions on the Caribbean nation.

Hamilton, meanwhile, is a career diplomatic official who is a senior officer of the U.S. Foreign Service with the rank of Minister-Counselor.

Previously, he served as Deputy Chief of Mission in Gaborone, Botswana (2009-12) and held State Department leadership positions in Washington, D.C.

Now that Trump announced a change of policy toward Cuba it is unknown who will definitely replace DeLaurentis at the end of this mission, AP added.