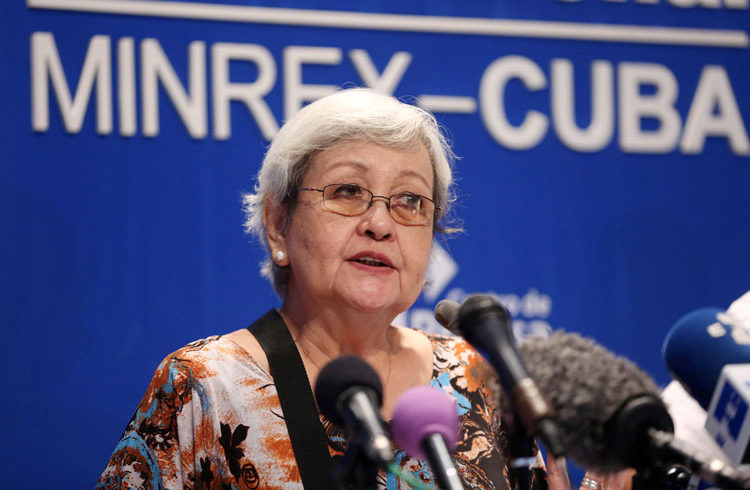 UN expert Virginia Dandan during the press conference prior to her leaving Cuba. Photo: Reuters.

The UN independent expert on human rights and international solidarity Virginia Dandan, from the Philippines, this Friday celebrated Cuba’s work in terms of solidarity, although she specified that there are also “challenges” to overcome.

After a four-day visit, Dandan recognized this Friday during a press conference Cuba’s commitment to international cooperation, especially in areas like health, education, sports and the facing of disaster situations. In these spheres, she said, the island has “important results.”

However, she pointed out the existence of elements that hinder a better enjoyment of solidarity, which she must analyze “more in depth.” In her explanation she gave as an example the Cuban government’s difficulties to have access to an advanced medical technology that guarantees the more qualified treatment of citizens.

She referred to the impact of the U.S. economic blockade, confirmed by the new Cuba policy of the Trump administration, as an element that has an incidence in this sense and promised to assess the reach of its restrictions to give a more complete opinion.

“Among all the documentation that I have to analyze, I hope to be able to find out more about the inconveniences caused by the blockade, its impact on Cubans’ capacity to enjoy their economic and social rights,” he noted.

Regarding the system of human rights in Cuba and the criticisms of organizations like Amnesty International or Human Rights Watch, she said she had nothing to opine since they were not aspects related to the objectives of her trip, mainly circumscribed to international solidarity.

The expert plans to represent a “thorough” report about her visit to the island in the UN Human Rights Council in June 2018. In the text she plans to reflect the “strong points” and the “challenges” detected and to offer some suggestions to the government to deal with these issues.

Dandan expressed her satisfaction at getting to know firsthand the Cuban experience, not just in exchanges with the authorities of different ministries but also with representatives of NGOs and some people in the street, but regretted that the brevity of the visit prevented her from interacting more with the people and traveling outside of Havana.

Until Friday she carried out an intense agenda on the island, part of which included talks with Cuban Foreign Minister Bruno Rodríguez and Minister of Foreign Trade and Foreign Investment Rodrigo Malmierca. She also met with high-ranking executives from the Ministries of Education and Higher Education, from the National Institute of Sports, Physical Education and Recreation, from the Ministry of Public Health and from the Civil Defense National General Staff.

In addition, she met with representatives of official civil society organizations like the Federation of Cuban Women, the Committees for the Defense of the Revolution and the Union of Writers and Artists of Cuba; and visited the Latin American School of Medicine, the Convento de Belén community project in Old Havana, and the Cuban Institute of Friendship with the Peoples, which is in charge of the island’s international solidarity activities.

Virginia Dandan is the second UN independent expert to travel to Cuba in recent months, after the rapporteur on trafficking in persons, Maria Grazia Giammarinaro, did so last April.

Both visits, on the invitation of the Cuban government, marked a new stage in relations between Cuba and the United Nations. No independent expert from the UN Human Rights Council had previously officially visited the island in the last 10 years.