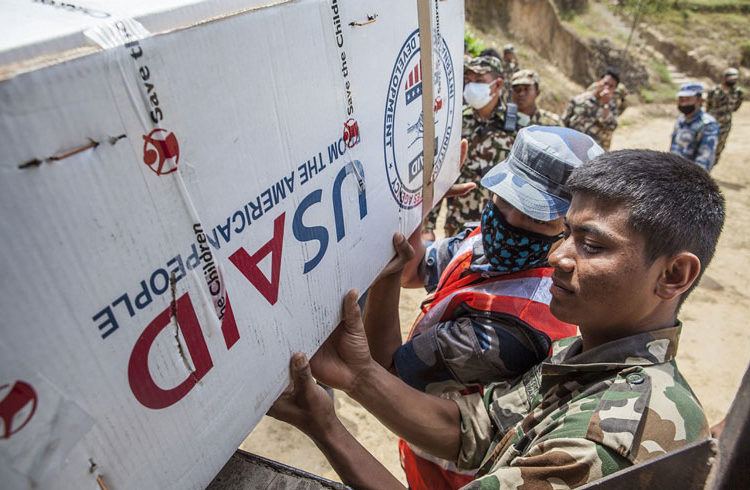 The government of Donald Trump aims to “drastically” reduce its spending on international aid, according to the magazine Foreign Policy. The publication, which cites a domestic budget document and government sources, also refers to a plan to merge the U.S. Agency for International Development (USAID) with the State Department.

The U.S. president, using his “America first” doctrine as an excuse, had announced this a month before when presenting his budget proposal. At that time he had defended the idea of reducing aid to developing countries by more than third and more than 28 percent cuts to its State Department to compensate for the increase in military and national security spending.

The proposal, which could come into force in the fiscal year of 2018, would particularly affect Latin America. Development programs, economic, humanitarian and health assistance could be canceled or reduced. According to Russia Today, “countries like Venezuela, Cuba, Ecuador, Nicaragua, Brazil, Jamaica and Paraguay would not receive a single dollar in aid.”

In addition, more than 30 USAID international missions would be eliminated and up to 65 percent of the regional offices of that agency, which is currently present in close to 100 countries, would be closed.

Andrew Natsios, ex USAID administrator during the George W. Bush administration, is of the opinion that if the proposal would come into effect “it will be an absolute long-term disaster.”

“What they are basically doing is disemboweling the most important tool of U.S. influence in the developing world,” Natsios said referring to the Trump government. “I don’t think they know what the role of USAID is.”

In February, around 100 retired generals and admirals sent an open letter to the White House and to Congress warning about the cuts to foreign aid and diplomacy. The letter highlighted the role of the State Department and USAID in maintaining global stability. Moreover, it expressed the fear that a budget cut would affect the United States’ influence in the rest of the world.

The experts also predict that the cuts to the financing of international health programs would place at risk persons from the entire planet, including those in the United States. Tom Kenyon, executive director of Project Hope, a non-profit global NGO, affirms “that people will die because of this.”

“I’ve seen firsthand how the U.S. money for development saves millions of lives,” he said.

Meanwhile, John Norris, executive director of the Sustainable Security and Peacebuilding Initiative and ex USAID employee, believes that with the cut the United States would be “much more vulnerable to the spread of infectious diseases as we saw with the Ebola crisis. Things that start abroad can quickly break out here.”

A CNN report places the United States as the largest donor to humanitarian crises in terms of financial contributions. A spokesperson from the United Nations Office for the Coordination of Humanitarian Affairs (OCHA) said to the television channel that that country donated approximately 6.4 billion dollars in 2016, 29 percent of the world’s spending for that.

The Trump administration’s proposal is facing a strong two-party opposition in Congress. However, it is expected that the approved budget will finally reduce the levels of spending in international assistance and aid, which U.S. journalist Tracey Eaton considers “reckless.”

“It would be reckless to drastically slash the budgets without a careful examination of the agencies’ many valuable and effective foreign assistance programs carried out worldwide,” said Eaton to OnCuba.

The author of the blog “Along the Malecón” – an indispensable source for following up the U.S. government’s cuts in the so-called “programs to promote democracy in Cuba” – recognizes that “there is wasteful spending in USAID and State Department budgets,” but warns that “many problems facing the U.S. are global in nature and can’t be solved by any one nation. They require cooperation.”

“Senseless cuts in foreign aid undermine any efforts to work with other nations,” he says, “on problems ranging from famine and poverty to terrorism and international organized crime. Cutting the agencies’ budgets is exactly the wrong approach if we want to try to get along with other nations.”

The agencies’ budgets make up little more than 1 percent of the total federal budget of the United States. A contraction of these figures, according to Eaton, “will, no doubt, win Donald Trump political points among his supporters, but the move would be short-sighted, counterproductive and – as Trump would tweet – SAD.”

As to the repercussion of the possible cuts for Cuba, Tracey Eaton has no conclusive prediction.

Eaton notes that “funds targeting Cuba are a tiny fraction of the USAID and State Department budgets.”

In his opinion, up until now “it’s difficult to comment on the impact Trump’s budget would have on those programs [directed at Cuba] without knowing more about what the president intends to do in regard to Cuba.”

During the Obama administration, the USAID carried out different operations in Cuba with the aim of “promoting democracy.” These operations, which included the Zunzuneo program – a sort of Twitter designed especially to have an influence in Cuba’s domestic political situation through cell phone messages -, were denounced by the island’s government as “foreign interference for political subversion” and questioned by a U.S. congressional committee.

The State Department, the Agency for International Development and the National Foundation for Democracy have invested 304.3 million dollars in democracy programs related to Cuba since 1996. The Broadcasting Board of Governors, which supervises Radio and TV Martí, has also spent more or less 700 million. That makes for a total of around one billion.

The Trump administration has not defined a concrete position in regard to Cuba, although it has announced a “complete review” of the policies toward the island implemented during Barack Obama’s term in office. Recently different voices from U.S. politics and society have asked the current government to maintain and deepen the dialogue with the island.