There were 43 new contagions. 52 patients received medical discharge. 12 were in intensive care. 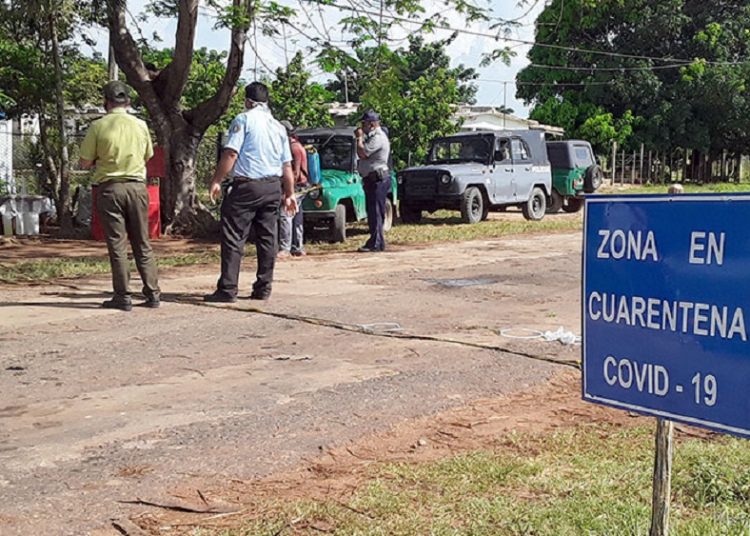 The territories affected by COVID-19 were: Havana, with 17 cases; Ciego de Ávila, with 16; Artemisa with six; and Pinar del Río, with four. The fatal victim, according to the Ministry of Health, lived in Ciego de Ávila, a province with an incidence rate of 11.44 per 100,000 inhabitants, according to Dr. Durán. In the image, a quarantine zone in the Majagua municipality. Photo: Ailén Castilla Padrón/invasor.cu

The death toll from the SARS-CoV-2 virus has reached 102 in Cuba, after the death this Sunday in Ciego de Ávila of a 54-year-old man, according to the report Dr. Francisco Durán gave today in his daily appearance before the press.

The medical evolution of the deceased is collected in the report of the Ministry of Public Health (MINSAP).

Meanwhile, the new contagions detected after performing 7,164 tests amounted to 43.

Of them, 42 correspond to Cubans and one to the only foreigner detected this time, also responsible for the “imported” case of this day that has gone to the records of Havana, where he resides.

The number of men exceeded that of women (27-16), 32 people were contacts of confirmed cases, in 10 the cause of the infection was not specified, and 22 were asymptomatic at the time of diagnosis.

The territories affected by COVID-19 were: Havana, with 17 cases; Ciego de Ávila, with 16; Artemisa with six; and Pinar del Río, with four.

At midnight on September 6, 1,469 people were still hospitalized for epidemiological clinical surveillance, while the confirmed active cases totaled 606.