Several Cubans who remained stranded in different provinces of the South American nation due to the coronavirus pandemic, returned to the island on a humanitarian flight managed by the Caribbean government and Cubana de Aviación airline. 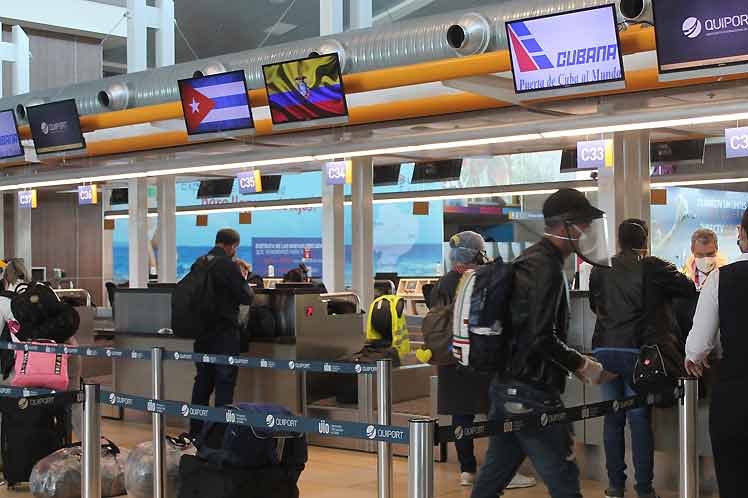 A group of 83 Cubans stranded in different regions of Ecuador returned to the island on a humanitarian flight managed by the Caribbean diplomatic authorities in the Andean country. Photo: Taken from Prensa Latina.

A Cubana de Aviación flight brought back to the island 83 citizens who were stuck in Ecuador due to the coronavirus pandemic. The IL-96 aircraft that carried out the transfer had previously returned to that Andean nation about 200 Ecuadorians stranded in Cuba.

The operation was carried out this Saturday without any complications, organized by the island’s embassy in Quito and its consulate, and supported by the representatives of Cubana de Aviación in Ecuador, where the company only works with cargo.

From the Mariscal Sucre International Airport, in the Ecuadorian capital, the flight departed with a group of Cubans who were scattered throughout different provinces of the South American nation, which closed its borders in mid-March, when it also limited inter-provincial mobility and public events.

These Cubans were waiting for the resumption of commercial operations, but the Ecuadorian government has decided to extend the closure of its borders throughout the month of May. The only option left then was a repatriation flight, as had happened with the stranded Cubans in Peru and Guyana.

Although this humanitarian flight is a relief for all those who boarded, there are still pending requests from Cubans interested in traveling to their places of origin, Cuban Consul Alejandro Rodríguez explained to Prensa Latina news agency.

“The whole problem is not solved, but at least it is a relief for the people who were here and were asking us, during the last month and a half, to return to Cuba with their relatives,” said the diplomat, who did not clarify if other arrangements will be made for more flights of this type in the future.

Oscar Silva, representative of Cubana de Aviación in Ecuador, told Prensa Latina that the organization of the trip was a challenge during the last week, in which compliance with all the requirements and sanitary regulations established for flights was prioritized.

The passengers appreciated the work of the authorities and the diplomatic staff, which will allow them to reunite with their families after complying with the 14-day quarantine period established by the island’s government for travelers coming from abroad.

Ecuador closed its borders in mid-March, but even so the Andean country has been one of the hardest hit in America by the coronavirus pandemic. As of this Sunday, it ranks fourth among the countries with the highest number of cases (almost 30,000) and deceased (more than 1,500) on the continent.

Although the situation is quite tense, President Lenin Moreno intends to move this May 4 from the isolation phase to that of distancing by zones, according to the level of risk, focused on gradually restoring activities.

This will allow reactivating public transport and the reopening of shops in some areas, as well as reducing curfew hours. However, “at the slightest indication of the virus reappearing, the initial situation of isolation will return,” said Moreno.