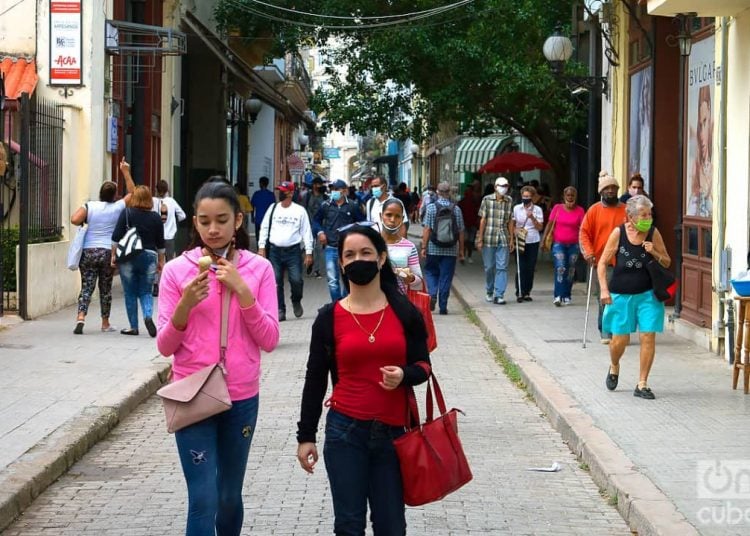 People on a street in Havana, on December 1, 2020. Photo: Otmaro Rodríguez.

With 86 new infections and almost all the provinces involved, Cuba ends a week in which 650 cases positive for the SARS-CoV-2 virus were identified, 194 more than in the previous week, according to Dr. Francisco Durán in his weekly appearance from the Cuban television studios.

This is a period in which all provinces have experienced “discrete increases,” in the words of the national director of Epidemiology of the Ministry of Public Health (MINSAP), who points to Havana as the territory with the highest number of infections in this period.

Although the capital is among the seven provinces with the highest transmission of the disease, in the statistics collected during the last fifteen days by the MINSAP, Pinar del Río continues to lead. This province’s incidence rate is 18.33 per 100,000 inhabitants, followed by Artemisa (10.10) and the Isla de La Juventud Special Municipality (9.60).

The imported cases are on the rise, but decreased compared to the information provided the previous week, when 265 infections were registered in the last seven days.

The United States, Russia, Mexico, Spain and Germany are having the greatest presence at this point, a figure that corresponds to the increase in travelers from those countries.

As for today’s 86 infections, 55 were autochthonous and 31 imported, and involve 80 Cubans and six foreigners, as specified in today’s report; 67% were asymptomatic.

For this diagnosis, 10,795 samples were processed at the 17 laboratories that the health system currently has, and 78 patients were discharged, making for a total of 8,378 who overcame the disease, 90.4% of those diagnosed since March 11, when the first cases of the new coronavirus were detected on the island.

At midnight, 4,103 patients were hospitalized for their study and 10 patients remained in intensive care: four in critical condition and six in serious condition.