Both countries signed two agreements that formalize Japanese donations for the improvement of electric service on the Isla de la Juventud and the purchase of buses for urban transportation in Havana. 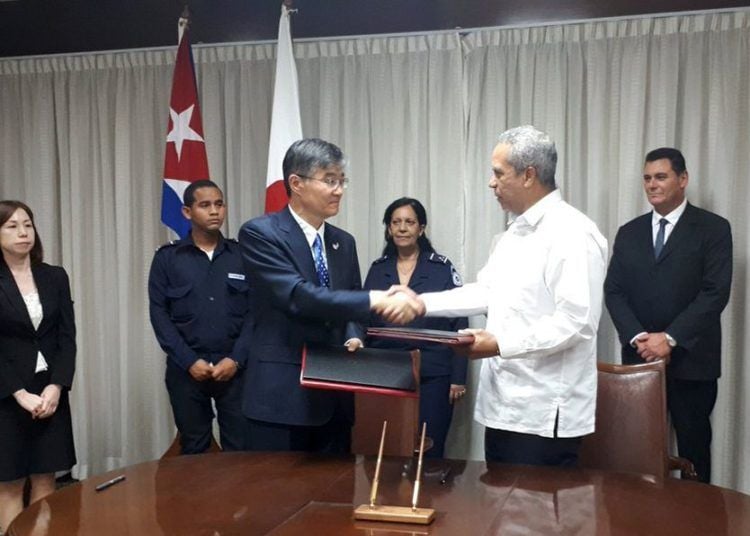 The ambassador of Japan in Cuba, Kazuhiro Fujimura (3-l), and Antonio Carricarte (2-r), the island’s first deputy minister of foreign trade and investment, greet each other after the signing in Havana of two bilateral cooperation agreements, on March 26, 2019. Photo: @embacubajapon/Twitter.

Authorities from Cuba and Japan signed this Tuesday in Havana two agreements for the granting of Japanese donations, aimed at the improvement of electric service and the purchase of buses for urban transportation in the Cuban capital.

The first of the documents formalizes the granting of a donation for the implementation of the project to improve the energy supply on the Isla de la Juventud, for a value of 2.392 billion Japanese yens (about 21.6 million dollars at the current rate), according to the Cuban News Agency (ACN).

In addition, both governments signed a second agreement for a donation of 1.050 billion Japanese yens (about 9.5 million dollars) for the purchase of urban buses for Havana, as part of the Economic and Social Development Program of the island’s capital.

On the Cuban side, First Deputy Minister of Foreign Trade and Investment Antonio Carricarte signed the agreements, while on the Japanese side the ambassador of that nation in Havana, Kazuhiro Fujimura, did so.

In recent years, Cuba and Japan have been boosting their diplomatic and commercial relations, as well as the sending of donations to the island by the Asian nation. Recently, a first batch of 24 garbage collecting trucks, of the Hino Motors brand, arrived in Cuba as part of a donation of 100 trucks for the sanitation of Havana that must arrive in several shipments until November, when the city will celebrate its 500th anniversary

The current Cuban president, Miguel Díaz-Canel, visited Japan in 2016, when he was first vice president of the Councils of State and of Ministers, and that same year Japanese Prime Minister Shinzo Abe traveled to Havana, where he met with then President Raul Castro and held several high-level meetings.

Two years later, the 15th Meeting of the Cuba-Japan Economic Conferences was held, which “identified several areas of cooperation such as waste management, the supply of advanced medical equipment, agriculture and energy,” the ACN explained.

Also in 2018, with the 3rd Japan-Cuba Joint Public-Private Committee, a protocol for a bilateral economic agenda was signed up to 2020.

Both countries established diplomatic relations in 1902 and currently share geographic and social challenges such as the impact of climate change and population aging.