Cuban media released this Wednesday local experts’ statements about the development of four possible vaccines, one of them very advanced in trial tests. 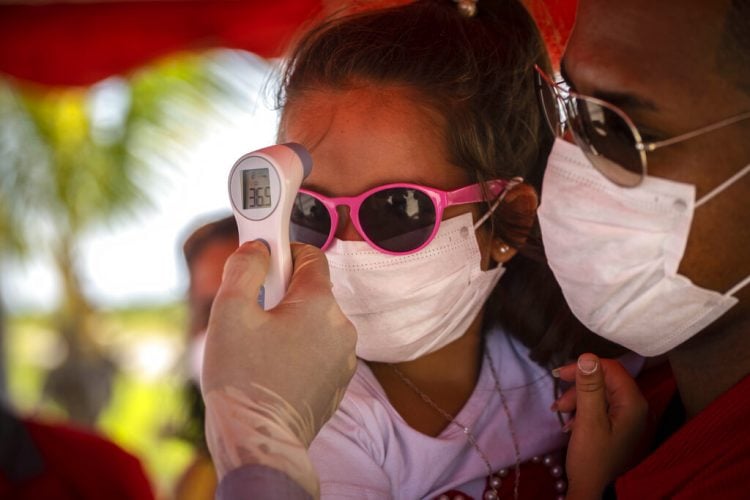 A girl wearing a mask to protect her from the new coronavirus has her temperature taken at a police checkpoint. This was at the entrance to the province of Havana, Cuba, on Monday, August 10, 2020.

Cuba is working on the development of its own vaccine to combat the new coronavirus at the same time that it negotiates with Russia the manufacture on the Island of the vaccine registered by the Eurasian nation’s scientists.

“There are several countries working on that … Our country is working with vaccine candidates” said the Cuban National Director of Epidemiology, Dr. Francisco Durán, on Wednesday. He also noted that Moscow scientists are in contact with their peers at the Finlay Institute from Havana.

Durán’s comments added up to the reports from official media that released statements by Cuban experts about the development of four possible vaccines, one of them well advanced in trial tests.

Independent experts considered that it is possible that the Cuban scientific park has a vaccine in development and remarked that the island has the capability of mass manufacturing it.

“Cuba produces almost 80% of the vaccines consumed by the National Immunization Program. They have the Finlay Institute and there is a great area of ​​technological innovation”, the director of the Pan American Health Organization in Cuba, Chilean José Moya, explained in a telephone interview with The Associated Press.

“I would not be surprised if Cuba advances with a vaccine proposal”, added the PAHO director, who indicated that he has scheduled a meeting in the next few days with scientists from the island to learn about the issue.

In an interview with OnCuba last June, Cuban scientists had confirmed that several institutions in the country, including the Finlay Institute, the Center for Molecular Immunology and the Center for Genetic Engineering and Biotechnology (CIGB), we are working “rapidly in parallel” on various projects, looking for “a successful outcome”.

“What we have done is to focus on the platforms that are our biggest strengths, such as vaccines based on virus-like particles, which have advantages in terms of the ability to enhance and activate the immune system; and the nasal delivery platform, which It is something that is little exploited in the world and is also little investigated”, explained Dr. Gerardo Guillén, director of biomedical research at the CIGB.

Meanwhile, from Moscow, it was reported that Cuba is among the countries that could co-produce the Sputnik V vaccine developed by Russian scientists; a vaccine whose announcement caused a real stir this week.

The vaccine presented in Russia has yet to be validated in a third phase of trials to be considered fully appropriate.

The World Health Organization stated that all potential vaccines – there is real competition between laboratories and governments around the world – must complete this final testing procedure before being distributed.

Experts warned that vaccines that don’t complete the testing phases can be harmful in a number of ways, from negatively impacting health to creating a false sense of safety.

“Cuba has excellent capabilities to manufacture vaccines. We are discussing the launch of production with several Cuban companies; we believe that Cuba can become one of the key centers for vaccine production”, said Kirill Dmitriev, director of the investment fund that financed the Gamaleya laboratory project in Moscow, according to a dispatch from the Russian agency Sputnik.

Cuba, which had managed to contain the spread of COVID-19, reported a new outbreak in recent weeks, for which it ordered a setback in the gradual opening process set since June.

Although some workplaces opened in June and July, classes across the country and public transportation in the capital remain suspended, and borders are closed, except for nationals returning on official humanitarian flights. Commercial flights have not been resumed.