Dr. Francisco Durán, national director of hygiene and epidemiology of the Ministry of Public Health, assured that “reinforced surveillance” is carried out at the country's airports, mainly with travelers from countries with the highest number of sick. 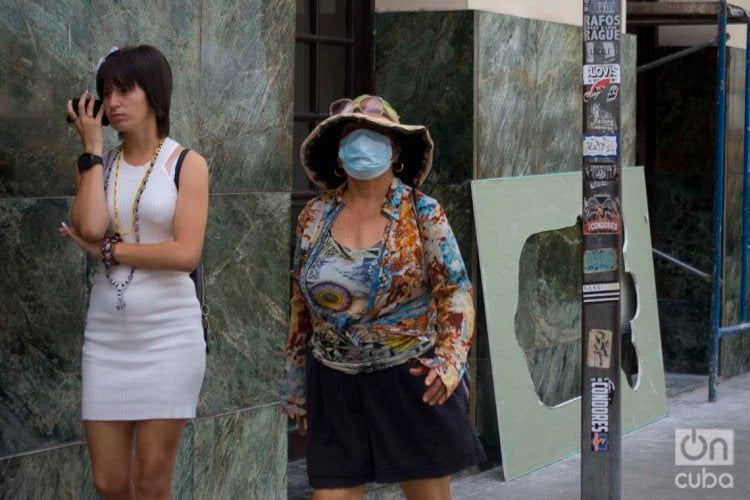 A woman covers part of her face with a mask in Havana, on March 12, 2020, after the health authorities reported cases with COVID-19 on the island. Photo: Otmaro Rodríguez.

Cuba is keeping its borders open to visitors from all countries, including those who have declared a state of emergency due to the coronavirus pandemic caused by the COVID-19 disease, Prensa Latina news agency reported this Friday.

Dr. Francisco Durán, national director of hygiene and epidemiology of the Ministry of Public Health (MINSAP), assured that “reinforced surveillance” is carried out in the airports of the island, mainly of travelers from the countries with the highest number of affected persons: China, Italy, Iran, Japan, South Korea, France, Germany and the United States.

The specialist affirmed in a press conference that logistics and medicines to treat the disease are guaranteed in Cuba, as part of the government’s plan against the coronavirus, and that measures have been taken for prevention and control at the border and in the interior of the country, particularly around suspected and confirmed cases.

Durán indicated that the four people detected with the disease so far on the island “are progressing favorably,” while a group of people suspected of suffering from the disease remain isolated, awaiting the results of the tests.

The first positive cases of COVID-19 on the Island were reported this week. Three of them are Italian tourists who arrived in Havana a few days ago and then traveled to the city of Trinidad, in the center of the island.

The other patient is a Cuban resident in the city of Santa Clara, married to a Bolivian resident in Milan, Italy, who apparently came to Cuba asymptomatic and infected her husband.

The four infected with the SARS CoV-2 coronavirus were transferred to the Pedro Kourí Institute of Tropical Medicine, in the Cuban capital, where their tests came out positive for the presence of the virus.

In all cases, people who were in direct contact with those affected were isolated under sanitary control, according to official notes released by MINSAP.

Durán also insisted on the need for people to see a doctor when respiratory symptoms appear and to comply with hygienic measures to avoid contagion, including frequent hand washing, the use of disinfecting solutions and to avoid crowds, as well as keeping abreast of messages and information broadcast by the media.

Tourism is one of the main sources of income for the Cuban economy, affected by sanctions from the Trump administration. After a decrease in the number of visitors in 2019, this year the sector’s authorities expected to reach 4.5 million visitors, a forecast now threatened by the global expansion of the coronavirus.