The European Union legislative body had condemned the “arbitrary” detention and had called for the “immediate” release of opponent José Daniel Ferrer, who according to Havana is imprisoned on charges of participating in a violent incident against another person. 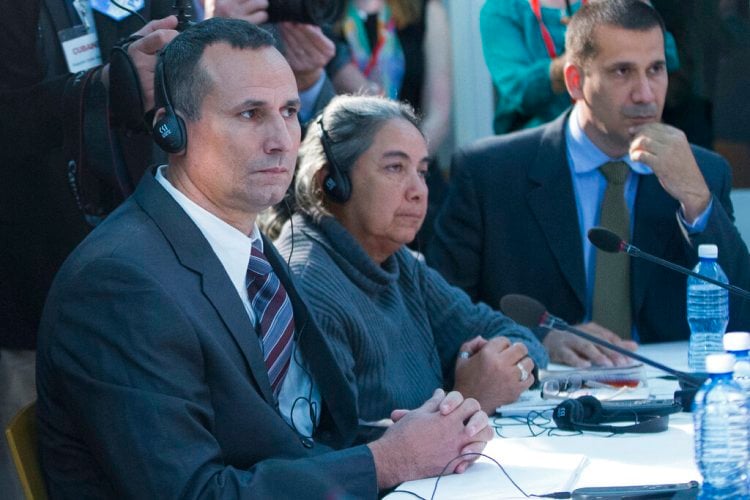 Archive photo from 2016 of Cuban opponent José Daniel Ferrer (left), along with other opponents of the island’s government, listening during a meeting with former President Barack Obama at the U.S. Embassy in Havana. Photo: Pablo Martínez Monsiváis / AP / Archive.

The National Assembly of Cuba, through its International Relations Commission, expressed “its strongest rejection” of the resolution approved this Thursday by the European Parliament (EP), which calls for the release of Cuban opponent José Daniel Ferrer, imprisoned since almost two months ago on the island.

The commission of the Cuban legislative body condemned the resolution, “approved by a majority of 56% in the European Parliament, for its interference in and damaging content to Cuban sovereignty, with absolute ignorance of our reality,” according to an official statement published in the state media

The European resolution was passed by 382 votes in favor, 243 against and 42 abstentions. It condemns the “arbitrary” detention of Ferrer―who according to Havana is imprisoned on charges of participating in a violent incident against another person―and “urgently exhorts the Cuban authorities to release him immediately, asks that he be guaranteed access to the lawyer of his choice, that he have contact with his family and all the documentation related to his detention and what he is accused of.”

The note affirms that the EP’s statement “responds to the new slander campaign orchestrated by the government of the United States of America as part of its failed policy of hostility and aggressions against Cuba” and expresses the “deep concern” of the Cuban Assembly over the fact that “right-wing political forces within the European Parliament” have “echoed that campaign and with obvious political motivation.”

The island’s MPs denounce the “frank subordination” of their EP peers to “the imperial desires of the United States,” which, they affirm, “contradicts the spirit of respectful dialogue that has prevailed in relations between Cuba and the European Union.”

The statement reiterates what has been said in recent days by the Cuban government―both through official statements and a television report―about the case of José Daniel Ferrer, whom it considers a mercenary “artificially manufactured” by Washington to attempt “against the constitutional order in force in Cuba,” and by those who affirm that his “criminal record has been documented in a timely manner.”

In addition, it affirms that for the Cuban legislative body, resolutions such as this one that “support” U.S. policy against Cuba and justify the embargo are “unacceptable.”

However, it expresses “the willingness of Cuban legislators to continue to maintain relations with the European Parliament and exchanges with its members on the basis of the recognition of our differences and respect for our independence and sovereignty, according to the principles of International Law.”

Ferrer’s case has been the subject of a growing controversy between Havana and Washington. The Trump administration accuses Cuba of arbitrarily arresting and mistreating in prison the opponent, leader of the illegal dissident group Patriotic Union of Cuba (UNPACU).

Meanwhile, the Cuban government denies these accusations and assures that they are part of a campaign to promote the closure of embassies and discredit the island internationally. In addition, it denounces that the U.S. diplomatic mission and, in particular, its chargé d’affaires on the island, Mara Tekach, carry out “illegal actions” that constitute an “interference in the country’s internal affairs.”

The EP resolution and the subsequent declaration of the National Assembly of Cuba take place in the context of the visit to the island of a European Union (EU) diplomatic delegation, which will hold a political dialogue with the Cuban authorities this Friday on unilateral coercive measures. This round of talks is part of the exchange mechanism agreed between Cuba and the EU, in the midst of recent years’ rapprochement of the island and the community bloc.