"If it’s cooked well (better in a pressure cooker) there won’t be any problems," said Dr. Antonio Vázquez, a specialist at the Pedro Kourí Institute of Tropical Medicine, who, however, warned that eating it raw marinated in lemon juice "would cause a problem, because it could transmit the nematode that causes eosinophilic meningoencephalitis in humans." 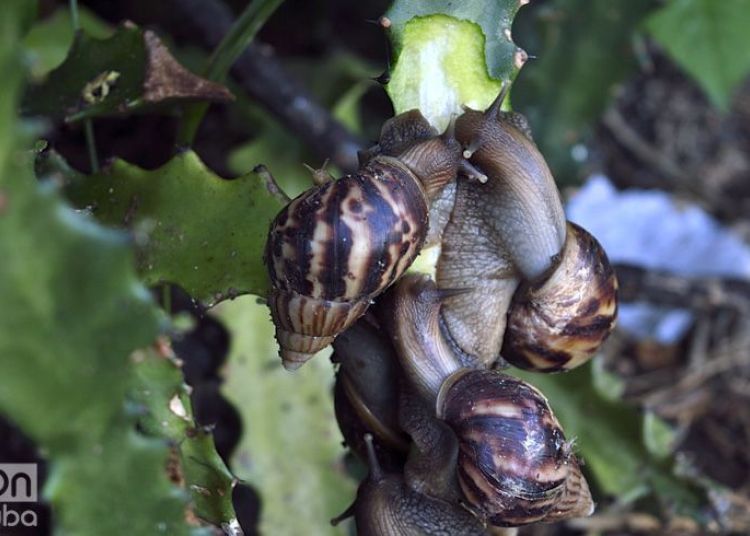 The Giant African Snail has spread throughout Cuba like a plague. Photo: Otmaro Rodríguez / Archive.

At a time when the Giant African Snail is invading Cuba even in the midst of a government campaign to combat it, a Cuban scientist publicly confirmed that, despite the effects it can cause to human health, the mollusk is edible.

“If it’s cooked well (better in a pressure cooker) there won’t be any problems. In fact, it is a dish that is eaten in Europe and South America,” explained Dr. Antonio Vázquez, a specialist in the Malacology Laboratory of the Vector Control Department of the Pedro Kourí Institute of Tropical Medicine in Havana, to the magazine Juventud Técnica.

However, the researcher warned that eating it raw marinated in lemon juice “would cause a problem, because it could transmit the nematode that causes eosinophilic meningoencephalitis in humans.” He also alerted Cubans to be careful because on the island “there is no culture rooted in the consumption of snails.”

Juventud Técnica contacted Dr. Vázquez after the recent posting on the internet of a video in which a Cuban cooks and eats an African snail, which has generated numerous reactions and concerns about the possible transmission of diseases such as bronchitis and intestinal disorders due to consumption of the mollusk.

Given these doubts, the scientist said that the snail does not cause bronchitis nor is it toxic or poisonous, but it is a “harmful animal” because it is “the best vector” of Angiostrongylus cantonensis, a parasite that causes eosinophilic meningitis, a dangerous disease that can even be deadly.

“Its large size allows it to carry a greater number of infectious larvae, so the probability of becoming infected with it is higher,” said the specialist about this mollusk, although he said that “all cases of this type of meningitis that have occurred in Cuba have not been from the African snail, only reported in 2014.”

The Giant African Snail was first detected in Cuba in 2014 in the neighborhood of Arroyo Naranjo, in Havana, and nowadays it has spread almost throughout the island. Considered one of the 100 “most invasive” harmful species in the world, its introduction was apparently due to Afro-Cuban religious practices.

This snail can lay between 50 and 300 eggs six times a year, and live up to nine years. Its adaptability and survival capacity, together with its serious effects on agriculture―of which it is a pest―and human health, make it an extremely dangerous species.

The Cuban government is carrying out a campaign to combat its advance and avoid its harmful effects, in which it has asked citizens and social organizations to participate together with specialists and health forces due to the rapid spread of the mollusk.