A program promoted by the government of the Cuban capital includes a group of measures that will take effect next March 1, including fines for those who throw garbage or debris outside of the established places. 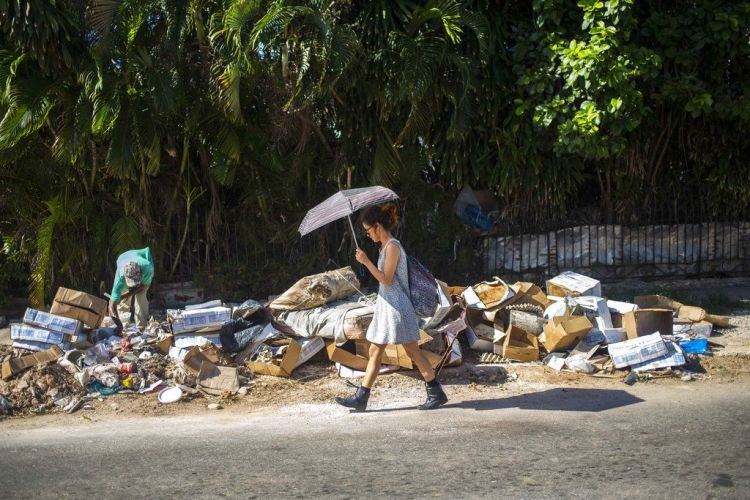 A woman walks next to a pile of garbage in the Vedado neighborhood of Havana, Cuba. Photo: Desmond Boylan/AP/Archive.

The government of Havana is promoting a plan for the conservation of the image and hygiene of the city, which includes high fines for those who fail to comply with the provisions.

The government program comprises a group of measures that will enter into force on March 1 and among which are that “each state or social entity is responsible for the permanent hygiene and beautification of its establishments, including its surrounding areas,” the newspaper Tribuna de La Habana reported this Saturday.

Among the measures to maintain hygiene in Havana’s communities and neighborhoods is the call to families to deposit household waste at the collection points established between 6:00 and 10:00 p.m. The violation of this rule can be sanctioned with fines of up to 1,500 Cuban pesos (CUP), as well as the non-collection of waste in these sites by those responsible for doing so.

On the other hand, those who throw waste in the avenues, streets, parks or other common areas outside the wastebaskets, baskets or garbage deposits, can be subject to fines worth between 150 to 300 pesos.

In addition, those who throw in public places debris resulting from construction actions in their buildings may be fined up to 3,000 Cuban pesos. This regulation, which will be valid for families as well as for state, social and private entities, means that the debris can only be deposited in the places that each People’s Council―local organ that includes a demarcation smaller than the municipalities―defines for this purpose, and that will never coincide with traditional domestic waste deposits.

As previously reported, residents in the municipalities of Centro Habana and Old Havana can contract the collection service from the Aguas de La Habana enterprise, for processing and reuse; while the families and entities of the rest of the Havana municipalities must manage the collection of debris through the Provincial Hygiene Department.

In the case of state and social entities or families that require carrying out actions that cause damage to the pavement, sidewalks, parterre or obstruct the road or part of it, they are “required to request permission from the corresponding authority such and as established by the regulation of road spaces approved by the government in Havana,” and must restore to the original state what is damaged, according to the date of the permit granted. Otherwise, they can be fined up to 2,500 pesos.

As for the pruning of trees by entities or families, these should be done on the second Sunday of the month, the day established by the Committees for the Defense of the Revolution (CDRs) for doing volunteer work on each block. The entities that perform systematic pruning within their functions were exempted from this norm, although in that case they must collect their waste on the same day.

Government actions are intended to be accompanied by a popular movement called “For a more beautiful, clean and healthy Havana,” with the participation of the CDRs and other community organizations, in coordination with local authorities.

Waste management is one of the most serious problems being faced by the Cuban capital, where more than two million people live and where 2,400 tons of waste are produced daily. To alleviate this situation, international organizations and governments such as Japan, Qatar and Austria have made donations and the government of President Miguel Díaz-Canel has even called for foreign investors to be involved in this activity.