The COVID-19 is threatening to expand rapidly outside China, the origin of the outbreak. 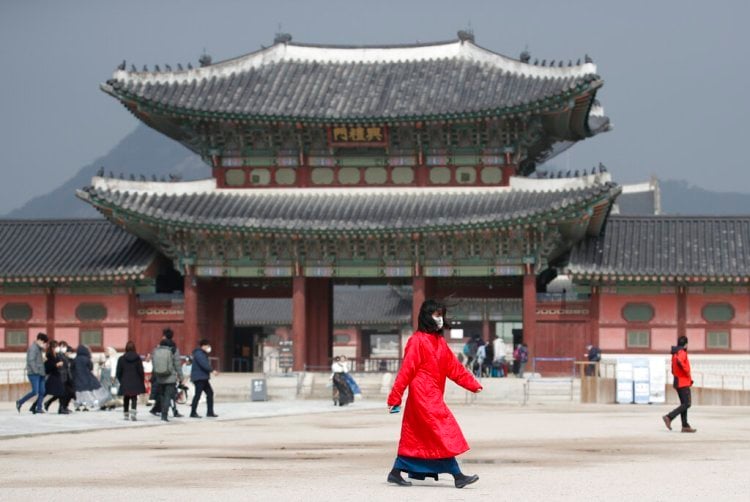 A woman with her mouth covered by a mask walks in front of Gyeongbokgung Palace, one of South Korea's best known monuments in Seoul, on February 22, 2020. (AP Photo/Lee Jin-man)

The coronavirus COVID-19, which until this Saturday has infected about 78,000 persons and caused the death of more than 2,350, is threatening to expand rapidly outside China, after the increase of cases in countries such as South Korea and Italy.

In South Korea, the infections multiplied by eight in just four days, reaching the figure of 433 cases, most of them related to a church and a hospital in Daegu, the fourth largest city in the nation and its surroundings, where health workers rushed to examine thousands of people.

The Asian country also reported its third death from this disease: a man in his 40s who was found dead at home and posthumously positive, and there is concern that the number of deaths from the virus may increase.

The COVID-19 patients with signs of pneumonia or other serious pathologies were transferred from the hospital in Cheongdo to other facilities, Deputy Health Minister Kim Gang-lip explained to reporters. Seventeen of them presented critical conditions, he added.

The official said the outbreak has entered a serious new phase, although he showed moderate optimism regarding its containment in the region surrounding the city of Daegu, where the first case was reported on Tuesday.

Of the 229 new cases in South Korea, 200 were in Daegu and nearby regions, which have become the latest front in the global fight against the new coronavirus.

This Saturday morning, the city of 2.5 million inhabitants and nearby areas accounted for 352 patients, including the two dead in the hospital in Cheongdo. The South Korean government declared a “special management zone” there and is sending help to alleviate the shortage of beds, medical personnel and equipment.

“Although we are beginning to see some more cases throughout the country, infections remain sporadic outside the special management zone of ​​Daegu and North Gyeongsang Province,” Kim explained at a press conference. In addition, he called for strong border controls to prevent the entry of infections from China and other countries.

In addition, an investigation is underway of a possible relationship between the faithful of a temple and the increase in cases in the hospital in Cheongdo, where for the time being 110 persons have been infected, mostly patients of the psychiatric ward.

Health officials examined 9,300 faithful, and said 1,261 had a cough and other symptoms. Four had traveled abroad in recent months, one of them to China, although the visit was in early January and was not near Hubei.

Anxiety is palpable in other parts of the country. In the capital, Seoul, the fear of the virus led many to avoid shops and restaurants and eat at home and order what they needed online. Buses and subways were full of people with masks.

This Saturday, a dozen Italian localities were under virtual quarantine after the coronavirus claimed two lives in that European country and spread among people who had no direct relationship with the origin of the outbreak in China.

Secondary infections led local authorities in the northern regions of Lombardy and Veneto to order the closure of schools, businesses and restaurants, and to cancel sporting events and masses. The mayor of Milan, the commercial capital of the country, decreed the closure of public offices.

Hundreds of people who came into contact with the more than 40 sick persons in the country were isolated pending the results of their tests, and Civil Protection teams installed a field hospital outside a closed one in Veneto to examine the medical staff.

In one of the most affected areas, Codogno, where one of the group’s first patients was in critical condition, its main avenue was virtually deserted on Saturday, with its supermarkets, restaurants and shops closed. The few people on the street covered their faces with masks, which were almost sold out in pharmacies.

A 78-year-old man, one of the seven people infected in Veneto, died Friday, Veneto regional president Luca Zaia reported. Two of those infected were related to the man who died.

Zaia explained that the infections showed that COVID-19 was transmitted like any other flu and that trying to identify a single source or links with China is no longer effective.

“Anyone can spread it,” he told reporters. “We can expect to have cases of patients who were not in contact” with supposed carriers.

A first Ministry of Health ordinance imposed a quarantine on 10 localities in Lombardy around Lodi, southeast of Milan, after the region reported on Friday that the number of infected had increased fourfold. On an individual basis, other cities outside the sanitary cordon, such as Cremona, enacted their own restrictions and canceled classes after confirming cases.

The authorities called for calm, but acknowledged that the situation was alarming because of secondary infections. The first confirmed case in Lombardy, who had met with someone who had returned from China on January 21, was still experiencing symptoms.

He worked at a Unilever plant near Codogno, and more than 100 of his colleagues were isolated waiting for the results of their tests.

Meanwhile, 19 Italians who spent more than two weeks in quarantine on a cruise ship in Japan landed at the Pratica di Mare military airport in Rome. They were stranded in the Diamond Princess since February 5. After the first medical checkups and a decontamination process, they were transferred to the Cecchignola military camp, where they will spend another 14 days in isolation.