The docking operation began this Wednesday at around 7:00 in the morning and the disembarking and evacuation of the passengers began around 1:00 in the afternoon. Cruise passengers will return to the United Kingdom on four flights from Havana’s José Martí International Airport. 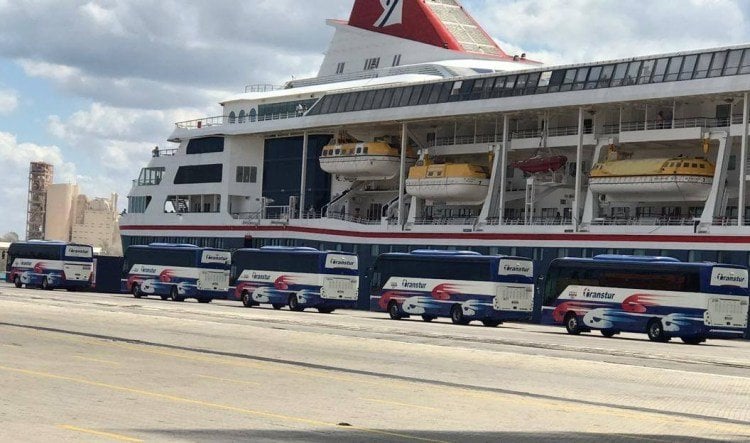 Buses in front of the British cruise ship MS Braemar, with five confirmed cases of COVID-19, for the transfer of its passengers after it docked on the morning of this Wednesday, March 18, 2020 in the port of Mariel, west of Havana. Photo: ACN / Facebook.

The British cruise ship MS Braemar, with five confirmed cases of COVID-19 on board and a group of people isolated for presenting suspicious symptoms, docked this Wednesday morning in the Cuban port of Mariel, west of Havana. The ship’s passengers’ disembarking and evacuation began at around 1:00 in the afternoon.

The cruise passengers were transported by bus to a terminal at the José Martí International Airport, for their return to the United Kingdom, while most of the ship’s crew members will remain on board to take over the ship’s journey when so determined.

1. Several passengers of the British cruise ship MS Braemar, show a poster of thanks to Cuba during the operation for their transfer from the ship in the port of Mariel to the airport.

The first buses with passengers arrived at the Havana terminal for their departure by plane this Wednesday afternoon, while the evacuation of the rest from the port of Mariel continued.

A video published by the Agencia Cubana de Noticias (ACN) news agency shows a caravan of buses leaving the port for Havana, guarded by the police. There were four lines of buses like this one, one for each flight scheduled for the transfer of cruise passengers.

The five confirmed cases will also be evacuated, a diplomatic source confirmed to the Spanish agency EFE.

A television report broadcast Wednesday morning from the Cuban port explained that the docking procedure would be carried out slowly, due to the strict measures established for the safety of cruise passengers, crew members and Cuban personnel participating in the operation, and whose number has not been made official.

Captain Ramón Castillo Carbonell, director of the Port Pilots of the Republic of Cuba enterprise, said during the evacuation, sea, land and air transport means would be used, “for which the personnel involved will be guaranteed during the movement of the cruise passengers to their final destination,” according to statements quoted by the newspaper Granma.

For its part, the Cuban Ministry of Public Health (MINSAP) assured that the evacuation, organized jointly with the British authorities, would be carried out following established international protocols and that the island has “all the resources and means” to carry it out successful.

The MS Braemar had 682 passengers and 381 crew members. After being rejected by several countries in the area due to the presence of COVID-19 cases, the ship entered Cuban waters this Tuesday, after which the island’s authorities accepted to receive it, a gesture that the United Kingdom government has publicly thanked, as well as several passengers on the ship through the social networks.

British Foreign Minister Dominic Raab said that he had maintained contacts with his Cuban counterpart Bruno Rodríguez on the case and said that London was “very grateful” to Havana “for quickly allowing this operation, and for its close cooperation to ensure that it be a success.

The British ambassador in Havana, Antony Stokes, also thanked the Cuban government in a video published from the Mariel port itself.

After disembarking, passengers―mostly British, but also of other nationalities―were transferred to the Havana airport―in duly insured bus caravans―, from where they will return to the United Kingdom on four direct charter flights. In the last of these flights, it is planned that the infected will travel, and that it be equipped with the necessary medical equipment and supplies. Its departure time is estimated at the stroke of midnight, according to Granma.

The Fred Olsen Cruise Lines Company, responsible for the ship, confirmed on its Twitter account that the aircrafts in charge of the transfer were already in Cuba.

Braemar update: we can confirm that all four planes have landed in Cuba and Braemar is now alongside in the Port of Mariel.

A previous note from the British company stated that people who are unable to travel by plane would be treated in Cuba, but apparently they will leave for the United Kingdom.

As for the Cuban personnel, Granma explained that “all the equipment for the transportation of passengers is protected and follows established safety protocols.”

A tweet from a passenger on the ship, named Steve Dale, in which he thanks Cuba for receiving the MS Braemar, shows two of the people in charge of receiving the cruise passengers, with clothing and means of protection.

We've now docked in Cuba and will be disembarking for flights home later today. Lots of welcoming tweets from the locals, some of whom are here to greet us! #Braemar #Covid19 pic.twitter.com/THUbqaoKfi

Another passenger, Anthea Guthrie, who has made several social media posts from the ship and also publicly thanked Cuba, showed on Facebook images of the evacuation process and wrote that “everything is going well here” and that the rules for a safe trip have been followed.

All going well here. Every rule abided by for a safe and steady journey.

Upon arrival in the United Kingdom, passengers who have not been confirmed to have COVID-19 must isolate themselves for 14 days, according to current protocol.

Cuba prioritizes prevention of COVID-19 in the elderly, according to MINSAP