And the liberation of the productive forces continues being the unresolved problem. 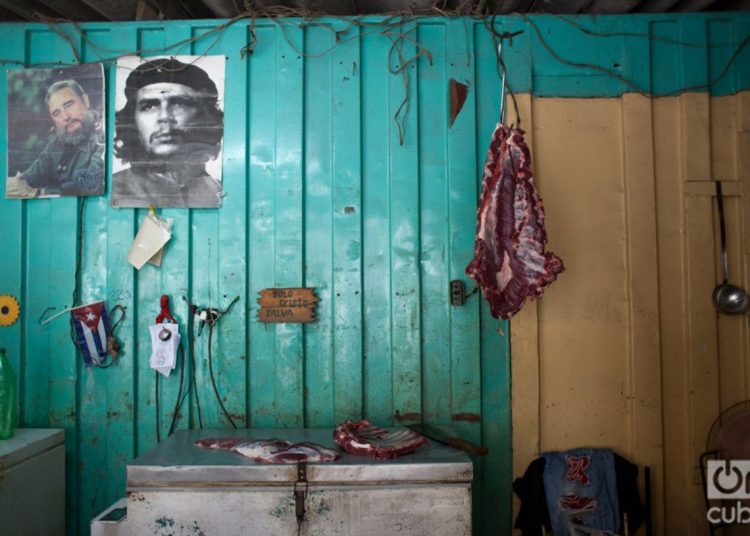 In Cuba, food production has fallen short of forecasts. Importing food has represented a headache for the State, much more in a context like the current one, characterized by serious problems of liquidity and asymmetries in the balance of payments.

Agriculture has gone downhill. And the great white hope, the process of distributing idle lands, has not yielded the desired results for a set of reasons that range from bureaucratic obstacles to lack of resources and the lack of incentives for producers.

At different moments of the process came the cattle, poultry and pig plans, usually small with respect to consumption needs. For a long time, the first has resulted in a beef supply in shock, which has resulted in beef steaks, shredded meat and roast meat being three sources and three integral parts of the esotericism at the table of Cubans

Its natural daughter, milk production, has persistently remained below floating levels. Two years ago, for example, we had to import more than 173 million dollars in powdered milk, more than 10 million in butter and more than 25 million in cheese and curd. In short, more than 215 million in dairy products.

Poultry has become synonymous to intermittence. According to Minister of Economy and Planning Alejandro Gil Fernández, the situation that has arisen with egg production comes from “problems in the import of poultry feed.” The result was then foreseeable: the halt in their sale off the ration book and the decision to ration them to fifteen eggs per person per month on the book. The Cuban press reported that in the debates of the National Assembly of People’s Power the need to produce the feed on the island was identified in order to replace that import and avoid crises.

But words don’t always translate into realities, and the pig plan is beginning to have the same problem. It used to be common to hear that the low availability of pork was due to the enterprises’ failure to comply with the production plan. This time, however, the failure is not attributed to internal but external actors: the unavailability of essential feeds like soy and corn due to breaches by Brazil and Argentina.

The déjà vu is inevitably related to the ships. Shortly before this, bread disappeared/minimized from the scenario due to a deficit in the import of 70,000 tons of wheat flour. According to the official explanation, in Santiago de Cuba and Cienfuegos the mills were not working for lack of spare parts, and in the west of the country the two production lines did not work for some time either. According to Minister of the Food Industry Iris Quiñones Rojas, that led to an “increase in tensions in terms of supplies that ensure rationed bread and other productions such as crackers and pastries.”

And not only the wheat flour but also the oil. The same duet, the lack of raw material and problems with the machines. The CEO of the Aceicom enterprise, Henry Trujillo Pérez, added that the “assistance of a foreign technician from the line’s suppliers” had been requested, which raises the question about what is happening with the training of its workforce. And the problem continued like that until the Russian brigantine appeared on the docks, as in the old days.

Chicken, which also comes from overseas, comes from the North. Cuba is today American companies’ third buyer of frozen chicken, behind Mexico and Taiwan: 155 million dollars in 2018, sales which were made possible with the approval in Congress of a law (2000) that allowed direct commercial imports of food and agricultural inputs, but with upfront cash payment. That’s why that chicken has excess fat and “has no flavor,” as consumers say. The current crisis then is not related to the embargo/blockade, but to a rather different thing called lack of liquidity.

All of the abovementioned is a heavy burden for the population, even for sectors with regular access to remittances. The market raises its invisible hand and the inevitable occurs: the raising of prices by sellers, who have come to ask 60-70 pesos for a pound of pork which has become an identification seal of Cuban food.

The cassava, which came from Lithuania.

The mango, sweet fruit from Krakow,

The yam, which is a native of Warsaw

and the coffee that is planted in Germany.

The yellow taro from Romania,

the Moldavian sweet potato and its sweetness;

from Siberia the mamey with its texture

and the green plantain the Ukraine grows.

All that is missing, and not because of us.

To meet the Food Plan

a strong, intense battle is being waged.

that the necessary effort is being made:

There’s food on TV and in the press.

In an economy trapped between structural deficits, zigzags and setbacks, with a lack of investment, unproductiveness and inefficiency, and with decades of vertical decision making, voluntarism, excess controls and Egyptian pyramids, the liberation of the productive forces continues being the great unresolved problem

“We cannot solve our problems with the same thinking we used when we created them,” Albert Einstein once said.