The worst part continues to be carried by the Cubans. They must settle for a number of appointments less than the demand and, many times, they are involved in scams. 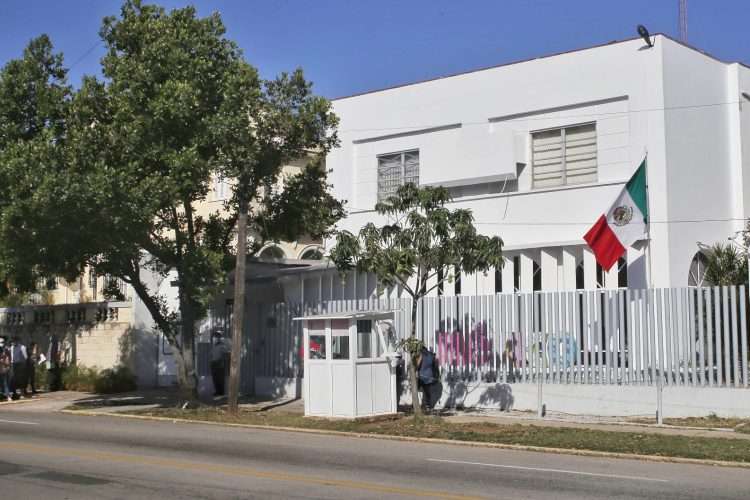 Embassy of Mexico in Cuba. Photo: Cubanoticias, taken from Crónica.

Better times are not remembered with the Mexican embassy in Cuba. Among the thousands of residents of the island who each year need an appointment to request a visa of any kind or legalization procedures, the shared memory on this institution is linked to its inaccessible and macabre system for obtaining appointments and the permanent complaints about their illicit sale.

Users of a group of more than 29,000 nationals on the Facebook social network have described it concretely: getting an appointment at the embassy in Havana is practically impossible. So much so that, according to Internet users commenting on the official account of the headquarters itself on Twitter, some have spent up to three years trying to get an appointment to materialize their procedures.

Getting an appointment: a Cuban fight against demons

On the odyssey of Cubans who need to carry out procedures at the Mexican headquarters, there are, at least since 2018, press records that account for the anguish of those seeking an appointment. Through digital media, social networks and official channels, Cubans have made known their testimonies and experiences about “the problems” to get an online appointment.

The platform arranged for the appointment process received the name of Mexitel until March 1 of this year, when it became Citas Cuba. With one name or another, the disagreements around the system have been the same over the course of the last five years.

Cubans have complained for years about the difficulties in accessing the platform due to connectivity problems on the island and the usual oversaturation of the page, which prevents even completing the data and validating the registration, even if the steps at the bottom of the page are followed to the letter.

And although, in response to the systematic concerns of users, the online appointment service has been updated with the inclusion of new authentication steps in order to “avoid” transgressions, in no way has access to appointments been guaranteed in simple way, “free and legal” as established.

The procedure for getting appointments has not been constant either. It has gone from a weekly to a quarterly system. But it has not managed to be more efficient for it.

In 2018, the Mexitel system was regularly activated every Friday around 9:30 a.m. (Cuban time), and each week “a certain number” of appointments were made available to Cubans for document legalization and visa application procedures.

Alternately, online appointments were activated for one week exclusively for document legalization and visa application procedures with permission from the National Migration Institute and, the following week, only for visa applications without permission from the National Migration Institute. In this way, users entered the week that corresponded to their procedure and tried to schedule their interview.

In 2019, although the system continued to open on Fridays, the appointment scheduling time was extended fortnightly. Currently, what is established is the quarterly opening.

Meanwhile, the opening notice by the consular headquarters, which was previously carried out on Wednesdays when the system was activated on Fridays, is now carried out imminently (on the same day). This is an element that contributes to the disorientation of users who, according to what they state on the networks, remain in constant uncertainty.

It is valid to clarify that in 2022, the annual number of appointments increased. Between January 4 and March 31, just over 4,000 appointments were opened. Meanwhile, on April 23 of this year, the diplomatic headquarters announced the opening, that same day, of 16,000 new appointments for the period between May and December.

However, according to users on the networks, the appointments for all those months of 2022 were sold out almost immediately. Therefore, it is obvious that the number of appointments available is still insufficient given the real demand.

In this scenario, the combination of the need to carry out a procedure and the almost impossibility of obtaining an appointment through the only established route leaves Cubans in a very bad situation. Or what is the same, in the hands of those who promise to “resolve” by other means, and always with money involved.

In troubled river… complaints of illicit sale of appointments

At least since 2018 there have been complaints of people dedicated to selling appointments. And the trend has been proportional between the increase in demand and the complaints of the rise in “parallel costs.”

Thus, when the appointments were scheduled weekly, a press report stated that “the safest way (to obtain one) was to pay 300 or 350 CUC (Cuban convertible pesos) to a person who lived near the embassy, that guaranteed you an appointment and a ten-year visa to Mexico.”

Only a year later, in 2019, a press release already mentioned that the costs reached around 800 CUC.

The demand for visas that shot up these numbers grew in a context in which Mexico became one of the most preferred countries among Cubans for shopping tourism to later resell on the island the merchandise purchased at competitive prices in that country.

During the years 2018 and 2019, Guyana, Panama, Mexico and Russia became the most visited destinations for these purposes by Cubans.

However, although Panama established its Tourist Card in October 2018 to expedite this type of travel, and Guyana and Russia maintained a visa-free agreement with the island, Mexico, one of the most attractive options for nationals, both for its cheap merchandise and its geographical proximity, never implemented similar facilities.

The fundamental reason for this lies in its northern border with the United States. Which turns a Mexican visa into an almost expedited path towards the “American dream.” However, not only those who wish to emigrate have required a visa in recent years.

Within the current scenario of economic crisis, and in particular, after the opening of borders in November 2021, the demand for appointments for consular procedures has increased. And, with it, the complaints of illicit management of appointments, which in December 2021 amounted to between 400 and 1,000 USD.

The scandal in the media and networks at the end of the previous year was such that it led the Ministry of Foreign Affairs (SRE) of Mexico to issue a statement to underline that “MEXITELCUBA is the only way for the public to request consular interview appointments for visa processing. The appointments are distributed automatically by the system, in accordance with a limited quota.”

The SRE itself acknowledged a few months later, already in March of this year, that it was “aware of the complaints about the availability and alleged sale of appointments to carry out consular procedures at the Mexican Embassy in Cuba, which have been exposed in the media, networks and through the Comprehensive System of Citizen Complaints of the Ministry of Public Administration.”

Although, according to what it stated, “in February 2022, SRE personnel carried out a visit to the Mexican Embassy in Cuba to evaluate the general functioning of the consular section” and in “said visit no indication of corruption or suspicious activity related to the attention of appointments by the staff of this representation.”

In practical terms, beyond the systematic complaints expressed by residents of the island in different ways, there is no evidence to prove these illegal procedures and who is implicated.

This is why the worst part continues to be carried by the Cubans. They cannot overcome the technical requirements of the appointment system, they must settle for a number of appointments that continues to be less than the demand, and when trying to “solve” obtaining an interview, they often find themselves involved in scams in which they lose hundreds and even thousands of dollars without being able to achieve their goal.

It is true that the Embassy recommends that nationals “not be fooled and avoid being part of illegal acts,” but the need to solve their procedures and the helplessness of not being able to achieve it even in years, leaves those who need visas on this island neither more nor less in the deep blue sea.