Digital works that can be bought and sold like any other type of property. 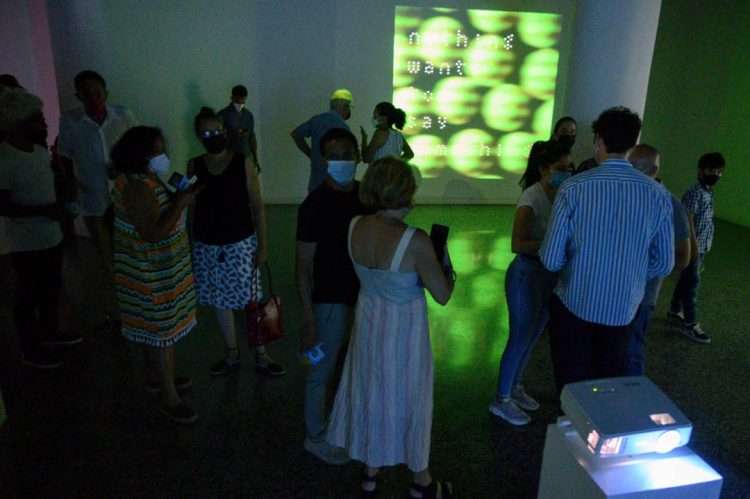 During the month of May, two hundred people paraded through the Galería Habana art gallery to learn about an extremely novel phenomenon such as NFT (Non-Fungible Token) art: digital works that can be bought and sold like any other type of property, but that have no tangible form and are offered as unique and impossible to copy.

Although it is not a considerable attendance, the influx of visitors does give a measure of the interest aroused by the exhibition What’s real/art, curated by María Lucía Bernal, director, and Viviana Vázquez, main specialist of the gallery, who brought together the digital works by Raúl Cordero, Humberto Díaz, Felipe Dulzaides, Luis Gómez, Octavio Irving and Mabel Poblet; six renowned creators, some with more experience than others in artistic and digital experimentation, but all well informed on the subject.

Fundamentally, academicians, artists and critics gathered in this space to approach the world of NFT, still not fully understood by many people. The exhibition opened a door to questions that, perhaps, have already been answered in other latitudes, where NFT art has existed for many hours. Many young artists make up this community in Cuba, which at the beginning was not only made up of visual artists, but also gamers, influencers and designers.

What’s real/art is the first exhibition of its kind in a physical gallery on the Island, although in Fábrica de Arte, last January, a virtual sample of 34 artists was exhibited on the Open Sea platform. Singular is also the catalog of the exhibition, a cardboard cube designed by Víctor López and the Remache Estudio group, with the QR code that allows access to the text and the pieces of each artist.

The entire organization of the exhibition, including the museography, has been conceived from the most advanced production. The curators’ text is an example of synthesized information about NFT art, its characteristics and the assumptions that led both specialists to venture into the project.

On the phenomenon of crypto art, they state: “Despite all the controversy generated around NFTs or precisely because of it, it is interesting to expand the works that are presented in the digital space to the physical space. What’s real/art is channeled into this effort, which aims to play with these concerns, show part of the Cuban art scene that is venturing into this new medium, and reveal dark areas in the process of creating an NFT. The exhibition does not aspire to answer all the questions surrounding the NFT phenomenon. It is a first approach that opens a forum for debate on the possibilities around this medium that goes beyond the artistic event and the real plane.”

The gallery took on the right environment for this type of art. The spectator was immersed in the darkness necessary to be able to appreciate the works on screen, some of which could be seen with glasses suitable for that perception. They are disparate works, very personal, considering the novelty of the NFT phenomenon, but attractive in general, ingenious and with a dynamic and suggestive visibility. Nelson Herrera Ysla recently commented: “It is surprising how quickly a Cuban art area, and a high-ranking and experienced gallery in the city of Havana, introduce the public to the latest trend that has managed to overcome physical constraints and materiality of the traditional aesthetic expressions to place us before virtuality par excellence: the phenomenon of the NFT.”

The renowned art critic asks himself a series of questions, which largely coincide with my doubts and questions, and those of others, about this phenomenon. In his words, Herrera Ysla summarizes: “It is interesting so far to recreate in a set of works and artists capable of playing or flirting, with a very delicate sense of humor, what NFTs offer. Is this a specific quality of contemporary Cuban art, compared to what is produced in other latitudes of the planet? Will it mark a modality of this trend worldwide? A contribution without realizing it? Does the Cuban artistic community maintain a true and strong presence in the universal register that today identifies NFT production, as it is said in some media? Was the curatorship clear about that intuition, those precepts, such conjectures, to finally develop the general idea of ​​the exhibition and bring it to a successful conclusion? I think so…since I don’t see ideas or loose ends. And we can find answers to these questions when we visit the exhibition freed from prejudices, and from a lot of burden accumulated by art histories.”

This exhibition will be, from now on, when the history of insular art is finally written, a defining moment, a turning point for an art about which we still know little, except for its accelerated registration and success in the global art market. I think that the NFT phenomenon, the newest within the visual artistic universe, is in a phase in which it aspires to the recognition of artisticity, although it rather seems not to be very interested in it, it is selling and that is enough. I think it is still an issue that remains to be seen if it will finally be considered art or not and on which the academies and specialized critics have not yet made a statement as they should. For those involved it does not seem to be something important now, that is to say, there it is, outside and independently of our consciences and generating profits and media attention.

The NFT needs to be studied more in Cuba. As Viviana Vázquez, one of the curators, recently declared: “A tremendous analysis would have to be carried out with the initiators, with the people from the Fábrica de Arte and the most important creators of this moment. The whole story is being documented and put together. Although not much is known, the Cuban NFT community has a weight that goes beyond our borders. Now then, when are we going to feel that weight? It’s too early to decide. There are consecrated artists who are venturing into this space, like the ones we have in this gallery. What I can guarantee is that there are many people doing different things.”

The market, which engulfs everything, took on this phenomenon immediately and, according to figures from The Art Market, from 2019 to 2021 sales went from 4.4 million to 10.6 billion, an extraordinary increase. This same platform revealed that 74 percent of large collectors bought NFT works in the biennium. In fact, NFT art artist Mike Winkelmann, known as Beeple, sold a piece at Christie’s in March of last year for $69 million, with a starting price of $100. More recently, Refik Anadol said in an interview that he had sold in a short time around 20 million euros with this type of product and, with a single piece, the amount of 1.3 million, truly astronomical figures. At the recently held Art Basel Fair, one of the largest on the international circuit of commercial events, if not the largest, there was space for NFT works and also for creating them in situ. It is imposing itself.

One is encouraged to think about whether this is already art, definitively registered and made official by postmodernity and the society of the spectacle (or computers or whatever you want to call this time) or is it another “con” by illusion-making magicians in order to obtain income at any cost. These are pertinent doubts in the face of the new and, above all, in a landscape as deplorable for its lack of authenticity as that of so-called contemporary art. NFTs are digital works (to carry on your mobiles, computers, etc.), which can be bought and sold like any other type of property, with images, video, audio and text included and that have incorporated the same blockchain technology that shields bitcoins and other digital currencies. But, within the artistic institution they officiate as works of art, for the time being. It seems enough that the necessary synergy be established between the creator, the product and the buyer to consider that it is art (that is, merchandise) and period.

Right now, the 15 Documenta de Kasel, the most important promotional (non-commercial) space in the entire international art network, has undertaken a curatorial campaign against the servile subordination of contemporary art to the market, encouraging news if one considers that the commercial became hegemonic in the global art scene for decades. British artists Gilbert & George said it many years ago with a conclusive phrase: “the history of art has been written on a checkbook.”

At least the six artists curated by Galería Habana are creators of proven and recognized work in traditional art, which is why they inspire us to believe in their NFT proposals. Time will tell. In any case, this seems to be the art that is associated or arises with the present (and with the future) and even if it does not make the original paintings, engravings and sculptures disappear, which obviously will not happen (just as the printed book did not disappear for many competitions and rivalries that arose for centuries), it can be the succulent alternative for a high range of buyers and investors who have more than enough money for this and other lives. However, tycoon Bill Gates, at a recent conference in California, considered that the purchase of NFT art could represent a good example of what he calls “the big fool theory,” showing that there is no unanimity among the big pockets on the commercial operation or investment in this merchandise.

For now, what is clear is that it is an expression of art that emerged in collusion with the market and the most advanced digital technologies; a novelty that must become fashion for the extremely rich, regardless of whether it is art or not.

While these discussions (which perhaps only exist in my head) are taking place, NFT art proliferates and the exhibition What’s real/art, by Galería Habana, is welcome, placing insular art and a group of its most experimental creators in a level of frank update.